The young Brazilian, Miro Latansio Tsai, just 5 years of age was recognized by NASA as the youngest person in the world to identify a asteroid. The Brazilian has already identified 15 celestial bodies, confirmed by the American Space Agency.

The opportunity to hunt for asteroids came during the pandemic, when the boy saw an announcement of a NASA initiative with other institutions around the world, including the MCTI (Ministry of Science, Technology and Innovation) in Brazil. The project, called Iasc (International Collaboration for Astronomical Research), has already won awards to another Brazilian.

THE Iasc is an asteroid hunting project, where the American Space Agency, provides material for volunteers who use software to try to identify celestial bodies from the images provided by the agency. One partnership that helps NASA investigate and confirm information about space. 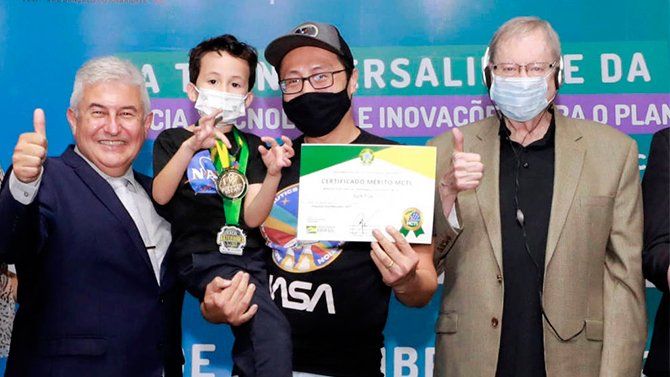 The boy’s mother, Carla Latansio, told interview for Folha that the boy has always been passionate about astronomy. “At the age of two, he knew the names of all the planets in the solar system. On the first visit we made to the Museu Catavento, in São Paulo, at the entrance they had all the planets on the wall and he went by, pointing his little fingers and saying the name of everyone”, he exemplifies.

Miro’s discoveries led him to be invited to the 18th National Science and Technology Weekwhere he received certificates from the MCTI, Iasc, in addition to a recognition medal, given by NASA.

I opened my astronomy club because my friends liked to see my medal so much, so I opened a little club to teach them – Miro Latansio Tsai, 5 years old

Brazilians are great at discovering asteroids

In addition to the young Miro, the 22-year-old Brazilian, Verena Paccola also received an award for the discovery of 25 new asteroids, one of them with the possibility of colliding with Earth. The medical student discovered a rare type of celestial body, called “Weak Asteroid”, in the same NASA program, which is on a trajectory towards Earth.

The faint asteroid gets its name because it is a celestial body with slower than normal orbital motion. NASA scientists will follow the asteroid to monitor its approach to Earth. The young woman also discovered the program by chance, and is preparing the documentation to name the asteroid Rochelle, in honor of her grandmother.