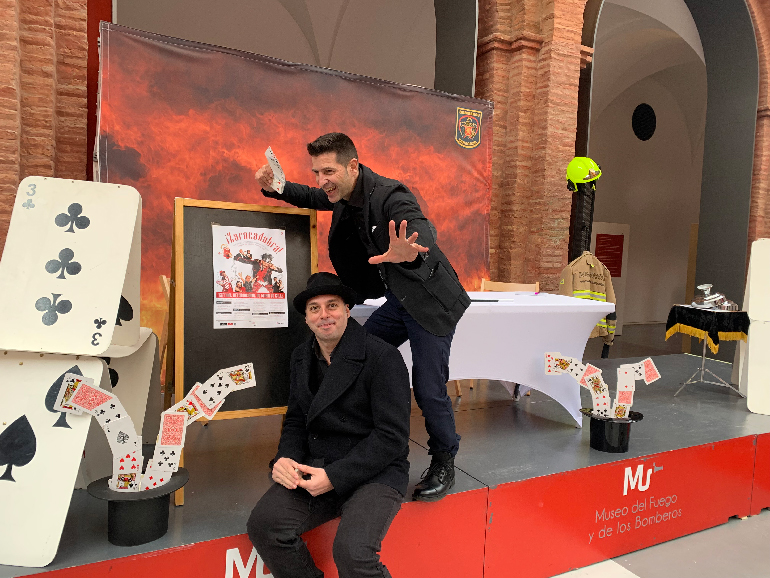 They say that magic is anywhere and you just have to look around you to find it. Sometimes, it is in the most unexpected places and that is precisely its power, that of filling disparate corners with illusion and mirages with tricks and shows that capture the attention and surprise those who pass through them. With this premise, Zaracadabra returns, the International Street Magic Festival that will be held from December 26 to 30 in different parts of the city and that in its ninth edition returns with more magic and illusions.

Eight illusionists, seven stage spaces and 15 shows. That is what this ninth edition is summed up, which is much more than magic and top hat tricks, since it aims to create a network of social magic and place Zaragoza within the world capitals of this art.

The show will begin on Sunday, December 26 at the Arbolé Theater with the show «Torpeza obliges» which, awkward or not, will merge magic, theater, clown, poetry and music with a touch of humor from the hand of the Civi-Civiac company. Directed by Ismael Civiac, artistic director of the show. “Magic is an ancient art and we want to be able to transmit illusionism anywhere,” he commented. The show will have two sessions, at 12.00 and 18.00 with a price of eight euros.

Many times magic does not need a specific place or space, it does not even require words because it is born when it reaches those who are excited about it. Valdespartera and the Plaza del Pilar will host the street shows of this edition. Playing with the mirages and with the dizzying wardrobe changes, the international duo of magicians Gisell and Luko will be in the Plaza del Pilar on Monday, December 27 at 7:00 p.m. Other internationals, Izimagic Duo, will do it on Tuesday 28 at 7:00 p.m. with “Metamorphosis” and on Wednesday the national touch will be Mago Patxi with “Do you know this chicken?”

“That a person who walks down the street comes across a magic show and stands 30 or 40 minutes, watching and enjoying what you do, that is magic in itself”, has recognized the artist Sergio Cisneros who, Mixing humor and amazing tricks, he will do “Magic for Everyone” on December 28 at 12.00 in Valdespartera and at the Pedro Laín Entralgo Senior Center at the same time on the 29th. “I am especially excited to do a show for the elderly because I have learned from great magicians who exceed me in age and it is gratifying to be there and perform for them,” he assured.

The Centro Cívico Universidad is another of the spaces that will be filled with magic with workshops for little great magicians with the Civi-Civiac School of Magic (December 27 at 12.00) and the same day at 18.00 with Izimagic Dúo.

How could it be otherwise, the Magic Basement will host the performances of Luko, one of today’s great magicians, on December 28 at 12 noon and at 10 p.m. accompanied by Gisell with a session of close-up magic and mentalism for adults . In the Sótano Mágico there will also be a recognized face, that of the showman Pepín Banzo, who will perform on Wednesday, December 29 at 12 noon and on Thursday at 6:00 p.m.

Finally, the Fire Museum will host two other shows by Gisell, who will show the “Dreams of a magician” on Tuesday 28 at 6:00 pm and on Wednesday at 6:00 pm there will be a performance by Izimagic Duo.

The entrances in the open spaces are free, the same as those of the Centro Cívico Universidad and the Museo del Fuego (reservation required). For the Arbolé theater, tickets cost eight euros and for the Magic Basement ten.

Thus, Zaragoza and its streets and spaces will become magical places where you can get excited and dream of the impossible.