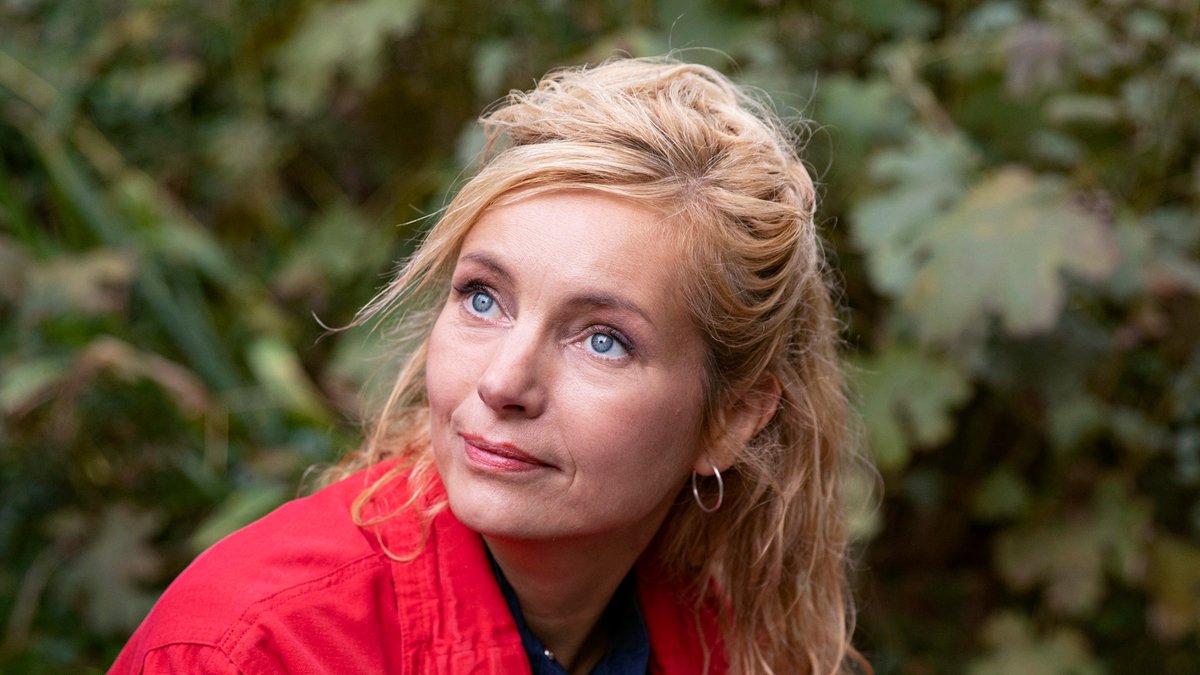 The turning point has already been the subject of many German productions. Nevertheless, the new series “ZERV – Time of Reckoning” has succeeded in illuminating a relatively unknown chapter. Because the Central Investigation Office for Government and Association Crime (abbreviation: “ZERV”) is not known to many. The special police commission, which existed from 1991, investigated white-collar and government crime until it was dissolved in 2000 and worked up criminal law on the SED and GDR past. The beginnings of “ZERV” are illuminated in the six-part series, which can be seen from February 22nd in the first.

Contents
In the new TV series “ZERV” you play the role of chief inspector Karo Schubert. What drew you to the role and the script? How was working with your co-leading actor Fabian Hinrichs?In the series, which revolves around the Central Investigative Agency for Government and Association Crime (“ZERV”), officials from the West and East face each other with skepticism and have prejudices. Do you think that’s all gone now?Do you also mean the division in society due to the corona pandemic or the discussion of whether to vaccinate or not?The series takes place shortly after German reunification (1991). What or which emotions do you associate with the fall of the Wall? Is there anything you miss from that time? Karo Schubert is a mother who gives her daughter all the freedom she needs and always supports her. What is important to you in education? May 23rd is your 50th birthday. Do you already have something planned? So the number 50 doesn’t scare you?(amw/spot)

In addition to an exciting plot, the production boasts a top-class cast. While Fabian Hinrichs (48) plays the West German Peter Simon, a specialist in white-collar crime, Nadja Uhl (49) can be seen as the Eastern Commissioner Karo Schubert. Despite the prejudices, the two must work together to put a stop to the criminals. Uhl grew up in the GDR himself. In an interview with the news agency spot on news, the actress talks about her childhood in East Germany and current divisions in society. Uhl also reveals why she is not afraid of her 50th birthday.

In the new TV series “ZERV” you play the role of chief inspector Karo Schubert. What drew you to the role and the script?

Nadja Uhl: When I read the script for the first time, the character seemed very likeable to me – a strong and funny woman. But after the first lockdown, the book had changed and I suddenly became strangers to the character. Director Dustin Loose [geb. 1986 in Bonn, Red.] and screenwriter Kim Zimmermann were open to my concerns. At first I wasn’t sure how to convey what I meant to these two young people who were socialized in the West. That you can develop a very special gallows humor in dictatorial conditions, for example. And that the people in the GDR were cool in their own way. But, after a week, a great book came. The two had great ideas. In 30 years of work, that was a special experience.

How was working with your co-leading actor Fabian Hinrichs?

Uhl: The development of our characters in the film also reflects our relationship on a micro level. You get closer and at first there is little friction. But we have become a dream team. I really like playing with Fabian. I also know his family and I like them very much. I would love to shoot with him again tomorrow. We sat and chatted for hours in the old Wartburg during the shoot. We also drank Prosecco in the make-up – together with our make-up artists. All of this in these surreal corona situations. The country went under and we shot our summer film, shivering in the freezing cold, like in a vacuum. That was a nice moment.

In the series, which revolves around the Central Investigative Agency for Government and Association Crime (“ZERV”), officials from the West and East face each other with skepticism and have prejudices. Do you think that’s all gone now?

Uhl: Sometimes prejudices still surface. But it has now taken a back seat because we have other problems. Society is no longer just divided into East and West – but split in many areas. The question is how we can remain humane and tolerant. There is a lot of talk about tolerance, but society is becoming more and more intolerant. East-West hostility is now only a fraction of the total hostilities. If you find someone idiotic – it doesn’t matter. There have always been idiots. But does that mean he has to be totally humiliated? No. At the moment we have to say more than ever: live and let live. Not only preach tolerance and diversity, but also live them. It is more important than ever to examine your own values ​​and not just want to be right. Standing by your own values, but not wanting to impose them on others. Starting with the East-West conflict – that not everyone wants to show the other that they are better. But there is currently another division within society, new stigmatizations. I wish people wouldn’t get involved.

Do you also mean the division in society due to the corona pandemic or the discussion of whether to vaccinate or not?

Uhl: Many things are becoming unspeakable again at the moment. This is a development since 1990 that we should not accept – regardless of position, skin color and origin. Not pseudo tolerant and pseudo colorful, but really tolerant and really colorful. You know, I was listening to alternative music and post-punk when I was 17 and hanging out in dark clubs. I was a good student – I had to be to study acting. We young people somehow stuck together to escape the control, the state-ordered bourgeoisie, the narrowness of the GDR. I don’t want any new stuffiness.

The series takes place shortly after German reunification (1991). What or which emotions do you associate with the fall of the Wall?

Uhl: The world opened up, it was incredible. I had a nice childhood in East Germany, had a warm family and the teachers were great. It’s not always black and white. My family uncovered environmental sins in the GDR. I’m proud of that to this day. At the time, however, this left deep wounds in the families.

Is there anything you miss from that time?

Uhl: The GDR had a better grip on curbing crime and violence – at least that was the impression it gave. I also miss interacting with children. There was no child poverty in the GDR. I think the social inequality, especially among children, is really bad. But I also miss the open handling of nudity. I grew up on a nudist beach, so to speak. After the reunification, people from the West stood on the nudist beach and complained that we were running around naked. I find that very unfortunate. Today, nudity is associated with pornography. This is a step backwards, ridiculous and prudish.

Karo Schubert is a mother who gives her daughter all the freedom she needs and always supports her. What is important to you in education?

Uhl: As a mother, you sometimes have the feeling that you’re doing everything wrong. One must always reflect on oneself and live what one preaches. I have always tried to show appreciation for my children. You don’t have to do anything for me in this life. For me as a mom, it’s enough if they breathe. I tried to teach the children independence and intellectual freedom. But there are limits that we come up against. When I get loud because the dishwasher isn’t empty or something like that. Years ago we introduced a ban on scolding. Our children, if they screwed up, can use the ban. This way they know that they can turn to us and trust us in an emergency situation. I will always be there for her too. But they must find their purpose themselves. Incidentally, what I like about the character Karo Schubert in this context: She shows that you can be a dear mom – without being a mother hen. One is not only a mother but also a woman. You can be motherly and sexy.

May 23rd is your 50th birthday. Do you already have something planned?

Uhl: I rarely celebrated my birthday. That was always too tiring for me. I had the feeling that I had to do something for my 50th – then I asked myself why? I can also meet my friends like this. I’m also more comfortable when it’s not about me. Maybe I’ll just do what I love to do most – go out in nature. The plans also depend on what corona restrictions are in place. Maybe it’s also self-protection – you don’t want to look forward to something that is then not possible. That’s why I don’t know yet whether I’ll celebrate quietly on the beach with my family or plan a techno party.

So the number 50 doesn’t scare you?

Uhl: Not yet, maybe it will come after our conversation. You don’t get fresher or crispier. But I don’t really care if I’m 50 or 60 – maybe that will change. I have no real relation to age. Unless I see film images and think to myself: “I look like 30 years of snow.” I’m vain there too, I want to feel beautiful. But the good thing is: I’m halfway at peace with myself. I’m not the most amazing woman in the world, but I think I’m okay and beautiful. I like myself and I want to celebrate that when I’m 50.