On December 27, 2021, the Airbus A321 took off from the airport half an hour late. Apparently, passengers would also arrive late at their destination, but strong tail winds made the Airbus reach 1200km/h flight speed relative to the ground and arrive one hour early at your final destination.

The plane was scheduled to fly at 1:45 pm, but took off at 2:15 pm from Los Angeles to Boston. The long journey crosses the entire American territory, starting from the west coast to the east coast. The standard time of the journey is calculated to end at 22:13. However, due to the high speed reached during the route, even with the delay in take-off, the Airbus A321 landed in Boston at 21:17 local time.

Even at 1200km/h that doesn’t mean Airbus broke the sound barrier.

The Airbus A321 traveled through American territory at 660 knots (about 1222km/h), so you may be wondering: “But then the plane broke the sound barrier?” The answer is no, even if the high altitude of the plane creates conditions for the sound barrier to be broken below 1200km/h, the Airbus speed is measured in relation to the ground. Which takes into account the movements of the Earth. Also, the standard speed for the model is around 800km/h, and it was the strong tailwinds that helped propel the Airbus. 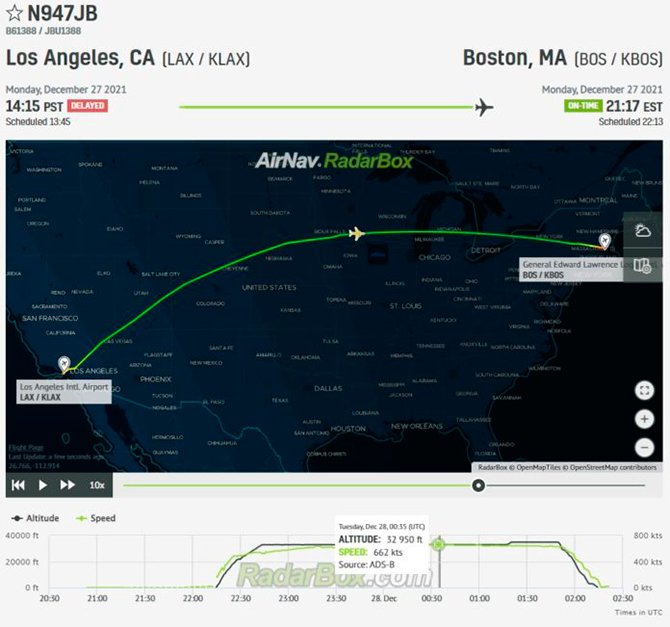 In the image above, released by the airport, we can see flight NJ49B bound for Boston during its journey. In the lower portion of the photo, in green, we can check the speed that the Airbus A321 was: 662 knots.

If the Airbus A321 had, in fact, broken the sound barrier, this news would probably not be a curious fact, but a tragedy. After all, the plane’s fuselage is not prepared to withstand the enormous friction caused by the breaking of the sound barrier, creating the possibility of a major accident.

Anyway, the curious fact shows how the high winds can help in the flight of an object as big as an Airbus, which is about 70 meters and can carry more than 500 tons. If the winds helped to travel from the west coast to the east, a flight in the opposite direction would probably face strong turbulence and not be pleasant.