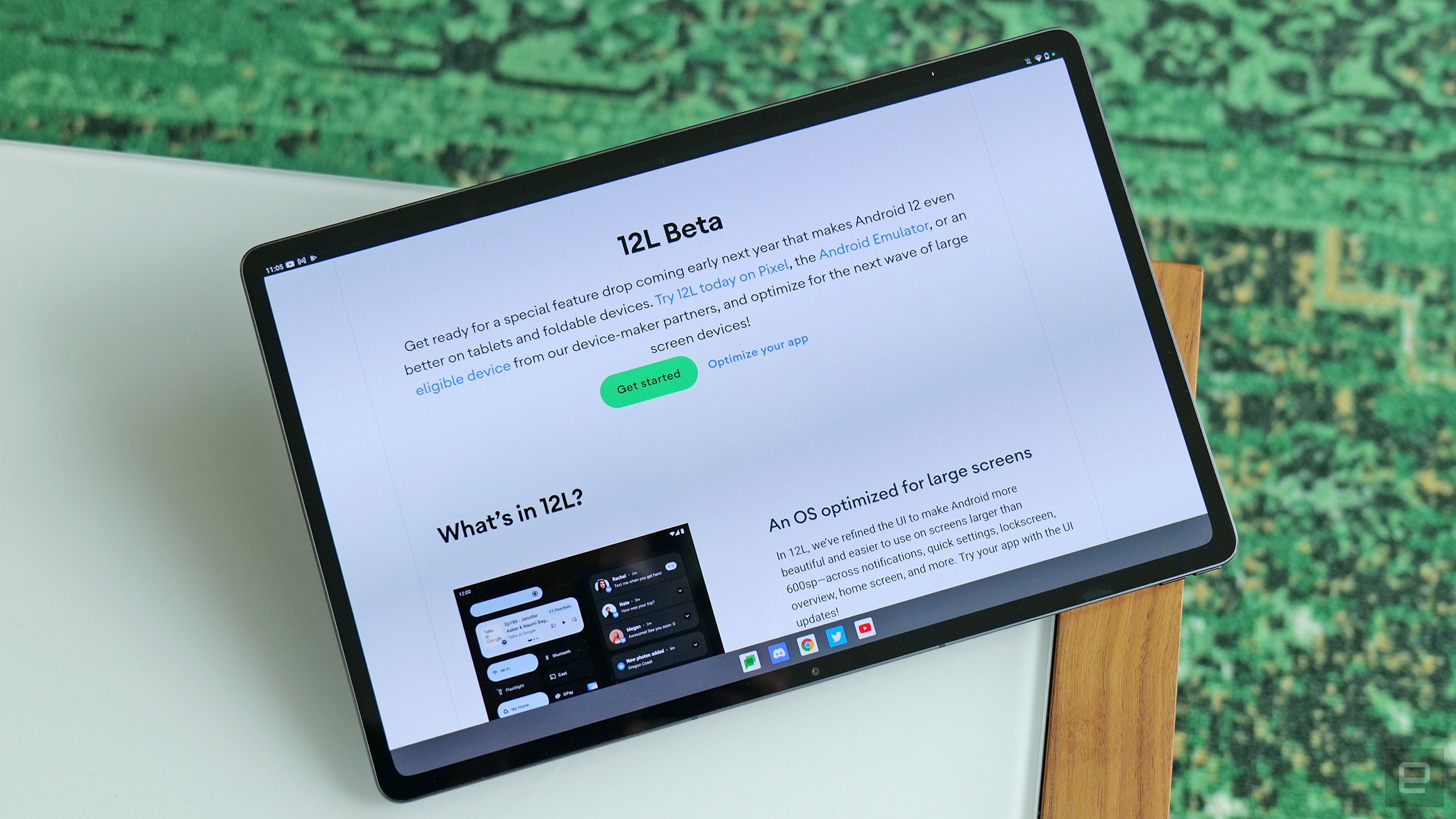 Despite Google being on the twelfth generation of its ubiquitous mobile operating system, recently it seems that Android has left tablets behind. Hell, even Google gave up on making its own tablets years ago, while some other device makers started favoring Chrome OS over Android on larger devices. But with Android 12L, Google is trying to address some of the operating system’s shortcomings, while also paving the way for emerging types of gadgets like foldables.

Contents
Why Android 12L?who is this for?When will Android 12L be ready for release?The big changes in Android 12LA new taskbar and improved multitasking

In contrast to Google’s typical annual release cadence, Android 12L is a timely return to older versions of Android that received one (or more) mid-cycle updates. A big advantage of Android 12L is that since Google doesn’t have to worry about including major sweeping changes like it does with its big annual update, the company can be more targeted about what kinds of features should (or shouldn’t) be included.

who is this for?

Google says Android 12L is a special update aimed primarily at supporting larger-screen devices, though all the new features are still coming to Android as a whole. Android 12L can currently be installed on a variety of Pixel phones (the Pixel 3 and up, but not the Pixel 6 or 6 Pro yet), Google’s Android Emulator and, critically, Lenovo’s P12 Pro tablet – which is the only tablet and third-party device that has been officially approved to run Android 12L so far. (It’s also the main device I’ve been using to test 12L.)

When will Android 12L be ready for release?

Google is currently in the midst of its testing and development cycle. Android 12L has already received two beta builds so far (depending on the device), with a third beta planned for later this month before an eventual release at some point. until the end of the first quarter of 2022 (which ends in March).

The big changes in Android 12L

A new taskbar and improved multitasking

The most important addition in Android 12L is the new taskbar. Similar to taskbars on desktop operating systems, the Android 12L taskbar sits at the bottom of the screen and contains a selection of apps for easy access (although I should note that on smaller devices like phones, the taskbar may not be there by default).

Unlike many Android launchers, the taskbar is pinned in place so it will always be there unless you are playing a video or game in full screen. That said, you can make it disappear whenever you want by pressing and holding. But where things get really interesting is that you can also open apps directly in split-screen mode by simply dragging the app’s icon from the taskbar to the middle of the screen. From there, you can easily adjust the application window size as you like.

So far in the Android development cycle, the addition of a taskbar and the ability to drag and drop apps in split-screen mode is as close to a “game changer” as we can get. This makes the multitasking process much faster and easier, particularly for larger devices like tablets and smartphones, which often feel like they have more screen space than they can actually use.

That said, there are some major limitations because, unlike Samsung’s One UI, there’s no easy way to open three apps in split screen at the same time or create permanent app pairs. But even more than that, the taskbar maxes out at five apps, which feels a bit limited. I mean, just look at all the extra space on the left and right where more apps could go. I really hope that for the final version, Google will increase the number of apps that can live down there, especially when existing foldables like Samsung’s Galaxy Z Fold3 have a similar taskbar that supports up to eight icons (plus a launcher). ) easily .

For people who love to watch videos, Google recently added a new split-screen icon to the picture-in-picture mode of the second Android 12L beta, so you can more easily switch from mini player to multitasking with just a few taps.

The other big area of ​​improvement in Android 12L is changes to the OS interface for larger screens. So instead of the single-column notification tray we’re used to seeing on phones, Android 12L features a two-column layout that places notifications on the right alongside the usual quick settings icons on the left. It’s a straightforward change, but it really makes the extra display area on larger devices worth it. And it’s a similar situation for the Settings menu, although once again I should point out that Samsung’s OneUI has had this for some time on larger foldables. Unfortunately, on the P12 Pro, I noticed that the two-column notification layout only works in landscape mode, which we hope Google can address in a future update.

Another smart quality of life upgrade is the Android 12L’s ability to move the PIN or pattern entry menu on a device’s lock screen to the left or right, based on where you’ve tapped the screen most recently. This makes accessing your device a little faster and easier. Though, once again, Google still needs to tweak things a bit. On the P12 Pro, the field showing your pin appears at the top of the screen, which looks a little weird (and also quite hilarious) in portrait mode. Google has also updated the Recent Apps screen with a new layout that retains the existing card-based system, while better utilizing the space on the sides of the screen.

Finally, while not yet available on the P12 Pro, Google has also added a new “dual line” clock option to the lock screen. So instead of putting a giant clock right in the middle of the screen, you can choose a more compact clock that’s tucked away in the top left corner.

Even more big-screen optimizations under the hood

Elsewhere, Android 12L has even more subtle enhancements designed to improve how apps look on larger screens, even if those apps haven’t been updated in a while. For apps that have not yet been optimized by their developers, Google has updated the Android 12L Compatibility Mode to make apps automatically look and respond better across various screen resolutions and orientations. And for apps that don’t take up the entire screen, Google has added new letterboxing options, including new overlays and background settings. There’s even a new tool for applying rounded corners to app windows, although as you can see from the square apps on our Android 12L test device, it’s up to device manufacturers to implement them as they see fit.

In the future, Google will also add ratings to the Play Store to help point out which apps have been optimized for large screen devices and support things like adaptive layouts and scaling options, which is especially important for foldables that can switch between various screen resolutions and aspect ratios on the fly.

Then there are more niche changes, like updated M3 buttons (the ones that look like little pills) that should help draw attention to important permissions, some new animations (like the power one in quick settings), and more intuitive labels for important multitasking functions. (like renaming “pin to top” to “split top”).

Google has been very clear so far saying that Android 12L is intended to support “the next wave of Android 12 tablets, Chromebooks and foldables”. So while you might see some improvements in the phones, Android 12L is really setting the table for the next batch of big-screen mobile devices. However, if we’re reading between the lines, perhaps the biggest takeaway is that Android 12L could herald the long-rumored arrival of the long-rumored Pixel Fold or possibly the return of a Google tablet. Google hasn’t done a mid-cycle Android update since Android 8.1 in late 2017, which suggests Google may have some future hardware designed to really show off all the new features in Android 12L.

But has it worked? Compared to the original Android 12, the new taskbar in Android 12L makes an immediate impact on how you use and multitask on a tablet or other large-screen device. With so many people working and learning from home, the days when a tablet could be a simple video-watching or social media machine are over, and with Android 12L, Google is recognizing that shift.

However, it’s not a clear win, because when compared to Chrome OS, which already has a dedicated taskbar and the ability to run Android apps, Chrome OS-based devices generally seem better suited to handling everyday productivity needs. or education, particularly on gadgets with integrated or optional keyboards. But for mobile-first hybrid devices like foldables, Android 12L makes a lot of sense, even though many of these new features are already available in other Android variations like One UI.