If there is one thing in common between any smartphone, it is that during its lifetime it will need to install at least one software update. This is valid for Android and iOS users. Now, do iOS and Android users behave differently with updates? The research carried out by the Router Network, with a thousand users seems to indicate that yes.

The research sought to identify how users behave in relation to software updates on their cell phones. Whether they are installed immediately and whether users are satisfied with the updates. Among the participants, 60% were men and 40% women; 363 iOS users, 623 Android users and 15 other systems users. The margin of error for the results presented is +/- 4% with a 95% confidence interval (high statistical probability).

The survey results show that Android users (67%) are more likely to be happy with updates than iOS users (56%). The model with the highest satisfaction rate was the Samsung Galaxy S21, with 78% of owners approving the updates. 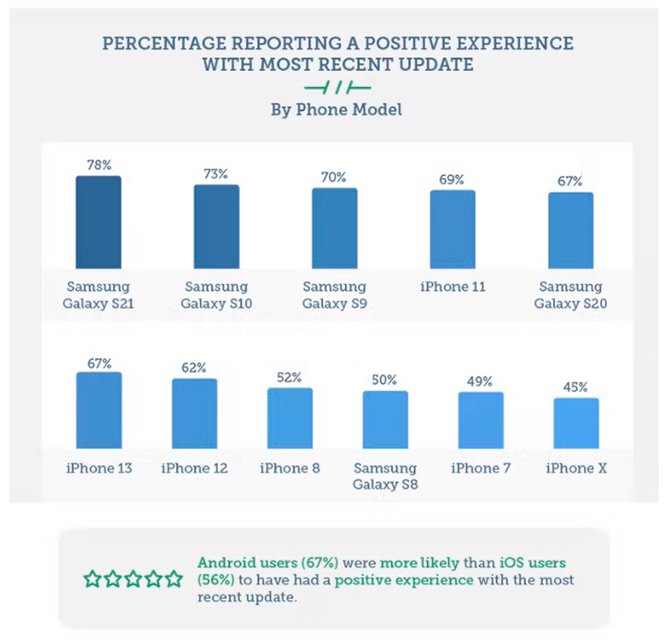 iPhone users are more afraid of bugs in updates (43%)

In addition, we can see from the graph above that users with newer smartphones, in general, are more likely to be happy with software updates. The survey also points out that users with recently launched devices, such as the Galaxy S21 and iPhone 13, usually have the latest software update installed, 98% and 91% respectively. In comparison, older smartphones like the Samsung Galaxy S8 (77%) and iPhone 8 (72%) are often not properly updated.

Another interesting research result is that the fear of bugs in updates is much greater among iOS users. When asked what reasons lead owners not to immediately install the update, 43% of those who own iOS responded for fear of bugs, while the figure on the Android side was 34%.

Now, even though Android users are happier with updates, 52% of Samsung owners have considered switching devices because they are uncomfortable with the frequency of updates. On the iPhone side, only 35% of users responded that they felt uncomfortable.

Although the survey results are interesting, the big difference between respondents with Android (623) and with iOS (363) can slightly affect the results found. If the research sample were more homogeneous in the Android/iOS relationship, the results could be different and even more expressive.

You can access the survey and see all the results by clicking here.