Recently some users complained that smartphones of the series iPhone 13 they didn’t seem to have any noise-canceling features for phone calls, something that was available in the accessibility settings of earlier handsets. It was expected that the technology’s disappearance was some kind of bug, but now the support of apple officially confirmed that this technology is not supported by new generation devices.

Confirmation of the discontinuation of noise cancellation on calls was made in a response from Support from apple at the twitter to a portal reader 9to5Mac. the owner of iPhone 13 stated that after spending some time with the company advising them to expect a future update, now received a message stating that the feature was intentionally disabled:

“We have an update on that. Phone noise cancellation is not available on iPhone 13 models, which is why you don’t see this option in Settings.”
– Affirmed Apple Support. 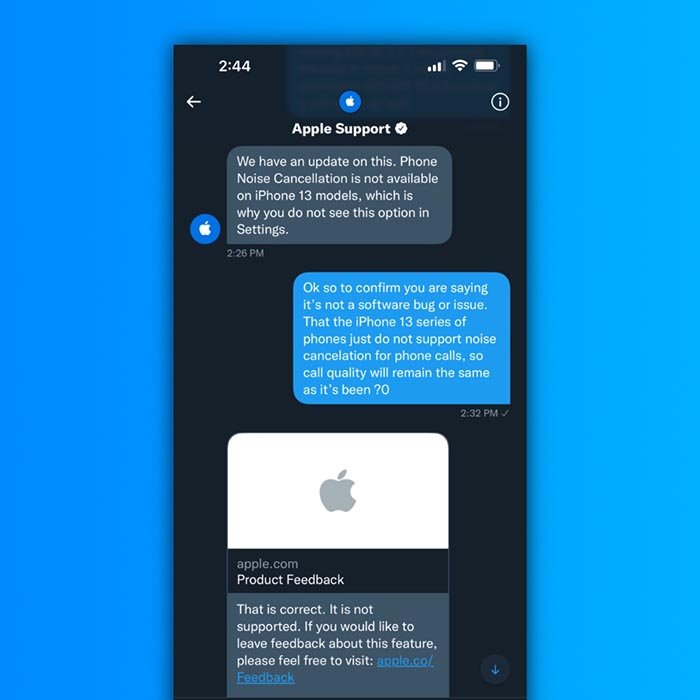 After receiving this message, he questioned whether the company does not want to introduce the technology to new smartphones or if they are not able to support the feature. In response, the company stated that technology “is not supported”.

not informed by apple the reason for the new smartphones iPhone 13 not be able to perform noise cancellation during calls. This is quite curious, mainly because, as pointed out by GSMArena, the company’s new handsets have the multi-mic system hardware that supposedly could accomplish this.

Either way, we now officially know that users using their series devices iPhone 13 to make calls from noisy environments, you will need to purchase an external device, such as a headset, to do the noise canceling work of the microphone.