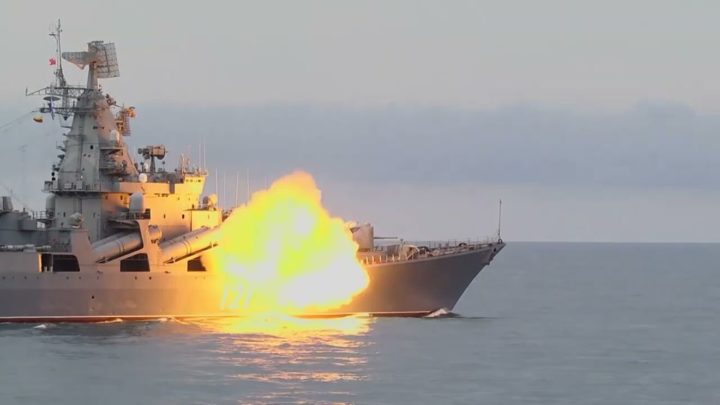 The battleship Moskva, a symbol of Russia, was sunk. A senior Pentagon official said the Russian cruiser Moskva was sunk by two Ukrainian missiles, stressing that it was “a huge blow” for Russia.

According to the US, the Moskva was hit by two missiles Ukrainian neptunes.

The US Department of Defense official did not confirm the information that the Ukrainian army distracted the defense of the Moskva with a 'drone' on one side of the ship, while the Neptune, Ukrainian anti-ship cruise missiles, hit it on the other side. .

Russia, which has not officially acknowledged that the jewel of its Black Sea fleet was sunk by Ukrainian missiles, said the crew had been pulled from the ship. The sinking of the Moskva could lead the Russian Navy to show more caution and less involvement in the Ukrainian war theater, said the senior official of the Pentagon.

Did Neptune Missiles Take Down the Almighty Moskva?

The R-360 Neptune is a Ukrainian anti-ship cruise missile developed by the Luch Design Bureau. The system entered service with the Ukrainian Navy in March 2021.

This is what the Moskva cruiser looked like before Ukrainian Neptune missiles hit the ship.#Ukraine #UkraineWar pic.twitter.com/4n3x5ZJqGI

According to the newspaper Marca, the artillery piece consists of a truck with a missile launcher equipped with four charges, a truck that serves as a command center and two trucks with extra ammunition. According to the I News, these missiles can reach a speed of 900 km/h. The weight is around 870 kg, with 150 kg being the warhead. They measure over 5 meters long and about 40 centimeters wide. They can destroy targets of up to five tons, which they hit with the help of a radar system.

The Moskva was reportedly struck by Ukrainian-designed Neptune anti-ship cruise missiles. These only entered service in 2019. They apparently hadn't seen action before in this war. /6 pic.twitter.com/JclOT1Lzfp

The military offensive launched in the early hours of February 24 by Russia in Ukraine has already caused more than 11 million people to flee, more than 5 million of them to neighboring countries, according to the latest UN data – the worst crisis ever. of refugees in Europe since the Second World War (1939-1945).

According to the United Nations, around 13 million people are in need of humanitarian assistance in Ukraine.

The Russian invasion – justified by Putin with the need to “denazify” and “demilitarize” Ukraine for Russia’s security – was condemned by the generality of the international community, which responded by sending weapons to Ukraine and imposing sanctions on Russia. that affect practically all sectors, from banking to sports.

The war in Ukraine, which entered its 51st day today, has already killed nearly 2,000 civilians, according to UN data, which warns that the real number is likely to be much higher.