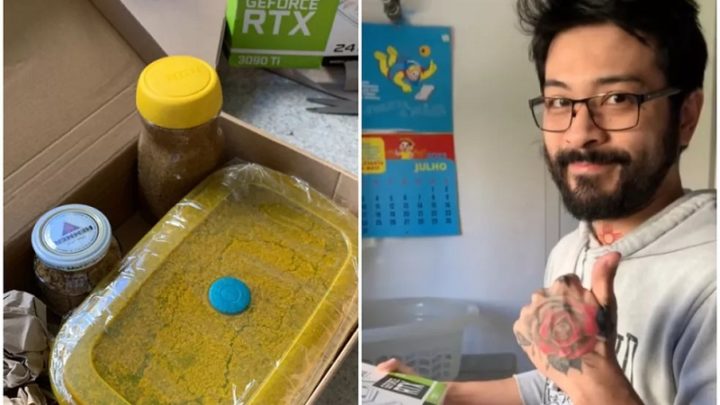 Every now and then there are unusual stories that show us various funny situations, or not, that take place in the technological world. And the most recent took place in Brazil and is related to Nvidia’s current high-end graphics card.

According to the information, a user purchased the GeForce RTX 3090 Ti model through Amazon, but received only a box full of sand at his home.

The case happened in Brazil with user Maurício Takeda e Sousa, 34, who is the son of cartoonist Maurício de Sousa, creator of the popular Turma da Mónica. It all happened after the user bought a copy of the high-end graphics card GeForce RTX 3090 Ti from Nvidia, customized by the GameRock brand, but, in turn, received a box and some other containers full of sand at home.

According to the information, Maurício had bought the alleged equipment on Amazon for 14,500 reais, about 2,600 euros, and confesses that he was in shock as soon as he opened the box and discovered the disheartening surprise.

The order was sold and transported by Amazon, having been carried out on July 2nd. The injured person turned to the social network TikTok to record the moment on July 13 and the video It already has thousands of views so far. Maurício also mentioned that, whenever he buys valuables, he records their opening as a form of security.

According to Maurício, he contacted Amazon the same day he received the order, demanding that the graphics card was actually shipped. In the video, he still cites article 35 of the Brazilian Consumer Defense Code, which states that if "the supplier of products or services refuses to comply with the offer, presentation or advertising, the consumer may, alternatively and at his free choice: I - demand forced compliance with the obligation, under the terms of the offer, presentation or advertising; II - accept another product or equivalent service provision".

But the contact with Amazon did not result in much, as they forwarded him to the "high value objects" sector, a service that can only be contacted via email. In turn, the injured party went more than 20 days without seeing the problem resolved, having even received links for the automatic deletion of his account.

In this way, he decided to register the complaint through specialized websites and proceed with a lawsuit against the company.