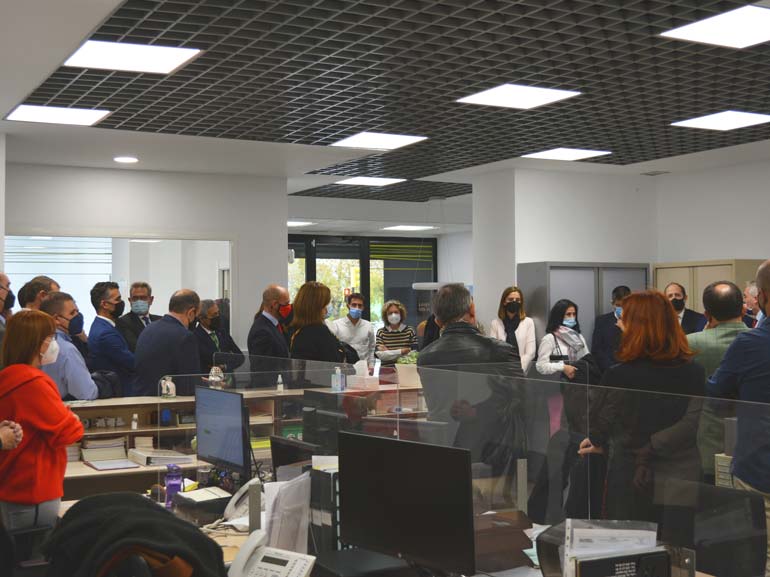 The Federation of Agrifood Cooperatives of Aragón has inaugurated its new headquarters this morning at number 32 of Paseo Echegaray and Caballero de Zaragoza. After 18 years developing its activity in the old facilities located in Mercazaragoza, the federation seeks, with the change made, to fulfill a double objective, on the one hand, to achieve a more central location that allows generating greater visibility of the entity and, for the other is to have more modern and adequate facilities in terms of space and resources for their activity, prepared for their present and future needs.

The event was attended by the Minister of Agriculture, Livestock and the Environment, Joaquín Olona, ​​the president of Cooperativas Agroalimentarias Aragón, José Víctor Nogués, as well as the presidents of Caja Rural de Teruel, José Cuevas, and Caja Rural de Aragon, Luis Olivera.

Likewise, the members of the Governing Council of the federation along with a large group of partners and workers of the organization were present during the event.

The place, which has more than 400 square meters, was acquired last summer and during this fall the necessary adaptation works have been carried out. The change reinforces the image of agri-food cooperatives, which want their business model to be better known among Aragonese society because, according to Adolfo Aragüés, director of the entity, “they play a very relevant role in our community, above all, in rural areas, where they act as a job fixer in places where there is a greater risk of depopulation ”.

For this reason, they want to spread their own values: democracy, solidarity, equity, union … “The federation is nothing but the sum of the wills of the people who make up our 160 cooperatives”, said its president, José Víctor Nogués.

Along the same lines, which aims to increase the notoriety of Aragonese cooperatives, the federation recently launched the campaign “naturally united by Aragon”, in which, in addition to claiming the work of farmers and ranchers, they highlight the link with the land : “In the cooperatives the benefits are reverted in the region, we are companies linked to the territory and, unlike others, we are not relocatable”, Nogués stressed.

Therefore, the new location, in a place of transit for people and vehicles, allows the federation to become more present both among its more than 49,000 members and 2,000 workers, as well as among current and potential consumers of products from agri-food cooperatives.