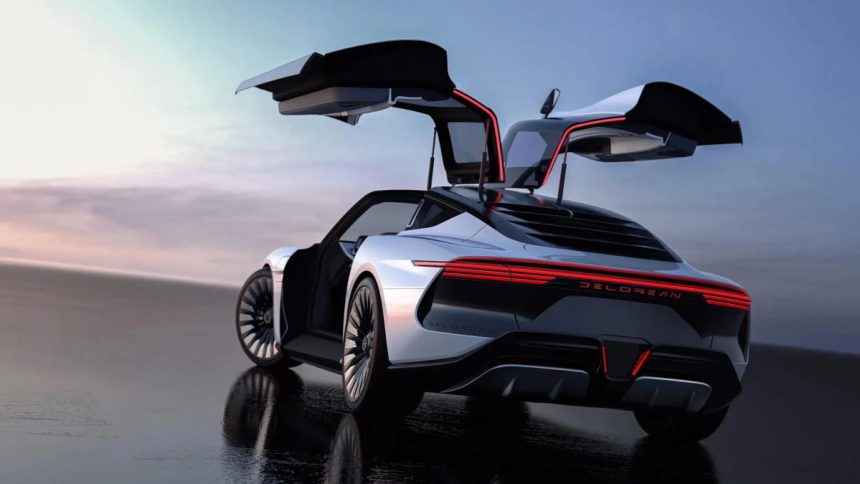 DeLorean will always have a prominent place in automotive history, largely because of its unique car and participation in the Back to the Future trilogy. This one is perfectly recognizable as an icon.

It was known that the American brand was preparing a novelty, but still without much information. The teasers have been appearing over time and now there’s a big news. The DeLorean Alpha5 EV was introduced and showed all its new style.

After many years of glory in the 80s of the last century, DeLorean eventually disappeared into history. The DMC-12 was always visible in the hands of collectors, but the brand was eventually sold.

There was nothing to suggest that the DeLorean would ever come back, but the last few months have shown something different. Rumors and information showed that something new was on the way, with a high possibility of being an electric.

All of these scenarios have now taken shape and the DeLorean Alpha5 EV was revealed to the world. There is not much information yet, but what has been shown promises a lot for this new high-performance electric sports car.

From what the brand revealed, this new model maintains its two huge gull doors, now having 4 seats. Again designed by Giorgietto Giugiaro, it maintains the same exterior lines, now betting on a minimalist interior.

It now has electric motors and the DeLorean Alpha 5 will have a range of almost 500 kilometers. It will be able to accelerate from 0 to 100 km/h and will have a top speed of 240 km/h.

The new DeLorean Alpha 5 is expected to arrive in 2024, but will be visible for the first time next August at the Pebble Beach Contest of Elegance. It has also been confirmed that production is currently limited to 88 units in the first release.