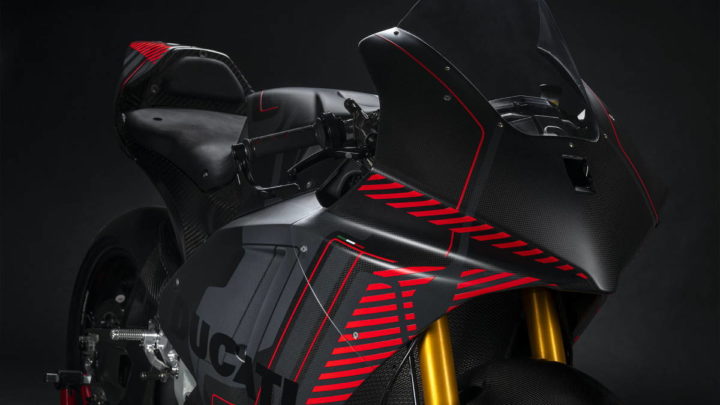 With a unique DNA in competition, Ducati’s mission is to be innovative and always be at the forefront of technology. It is therefore natural that you bet now on an area that will gain a large following and become the standard for years to come.

We are talking about the electric motorcycle, which will soon be massified, as is happening now with cars. To show how it has already evolved, Ducati presented its electric motorcycle, the MotoE, created to be used in competition and to be at the top from the very beginning.

One of the big drivers for the growth of electric vehicles is, without any doubt, competition. This showcase makes it possible to develop new technologies and improve many of those that are already in use on a daily basis. Ducati knows this and for that reason the bet on MotoE is something natural.

The V21L prototype has all the classic Ducati look, but it's stuffed with carbon fiber and comes with a 150HP electric motor with an 18kWh battery. This will be the basis for all 18 bikes that the MotoE championship will go on, which takes on an even more important role.

The V21L can be charged to 80% in just 45 minutes and has enough autonomy to complete the necessary seven laps on the main GP tracks. From the tests carried out, this electric motorcycle managed to reach a top speed of 275 km/h at the Mugello MotoGP circuit, in Tuscany.

The Ducati MotoE has a total weight of 225 kg (12 kg less than the minimum requirements imposed by Dorna and FIM for a motorcycle capable of completing the race distance). It has maximum power and torque values ​​of 110 kW (150 hp) and 140 Nm respectively.

The Ducati MotoE development process also involved the Ducati Corse test team led by Marco Palmerini. He worked on the track applying the same methodologies used in MotoGP, thanks also to the support of riders Michele Pirro, Alex De Angelis and Chaz Davies.

MotoE is an important bet for Ducati considering this is its first electric motorcycle, but the company has revealed that it used its extensive racing experience to design the model. At the same time, it will bring the lessons learned from racing to your road models.