THE Tesla had revealed last year that their new cars Model S and X would come with GPUs AMD Ryzen RDNA 2 on your hardware, which are the same graphics cards that power the consoles Xbox Series X / s and Playstation 5. Thereby, Elon Musk celebrated the fact that it allows users to play new games in their cars, but the library of available titles is still very small, to solve this, the automaker wants bring the Steam library to your infotainment system.

According to a billionaire’s response to a question from a follower, who wondered when the new version of Cyberpunk 2077 would be available for company vehicles, he said he is working with valve to take some of the titles from the biggest computer game store to their vehicles. Elon not confirmed that this will happen, just saying that they are working or to bear the Steam or take specific titles for your cars.

A point that will help Tesla to be able to support Steam is the development of the handheld console Steam Deckwhich is being done based on Linux. Thanks to this, support for the company’s store should be much easier, because the automaker’s vehicles are also based on the same system.

In addition, both the new cars and the company’s handheld console valve are built with a GPU-based architecture RDNA 2, which can make this even easier. The new ones Model S and X have a graphics card internally AMD Navi 23which has a power of 10 TFLOPs, and a CPU Ryzen Embedded quad-core, possibly on Zen+ architecture.

Thanks to this hardware that is powering the models, it is possible that vehicles will be able to offer a wide range of new generation games for their drivers and passengers. The VideoCardZ portal made a chart comparing the company’s cars Elon Musk with the main consoles on the market, in addition to the KFConsolewhich is a console that has a kind of airfryer for chicken: 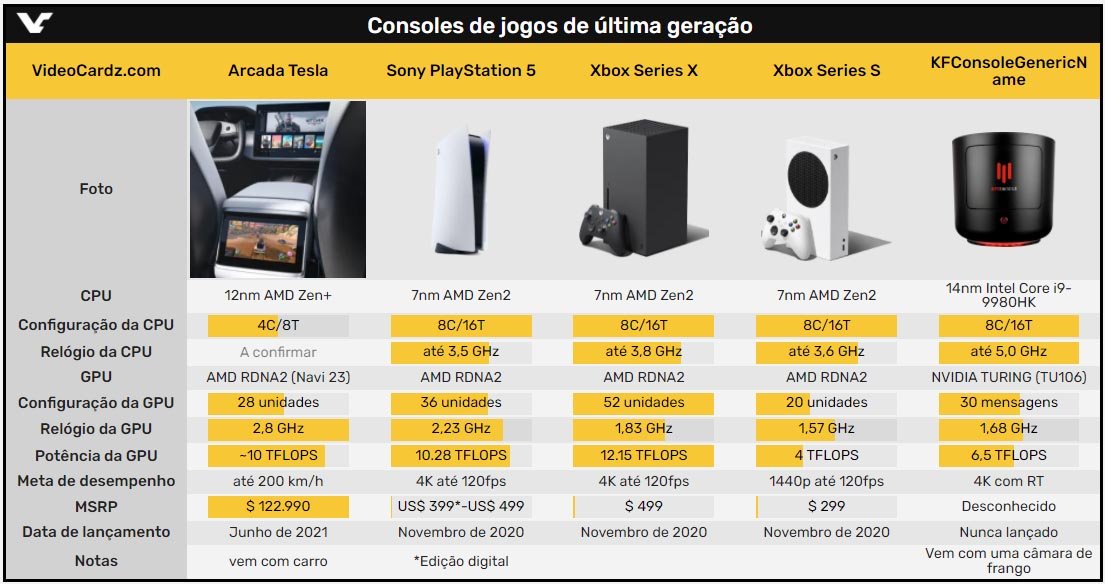 This is the vehicle infotainment system of the Tesla already generated good controversies for the company, which was allowing users to play games while driving their models. This eventually led to an investigation of the company by the US National Highway Safety Administration (NHTSA) and caused her to had to block the option to play while the vehicle is in motion.