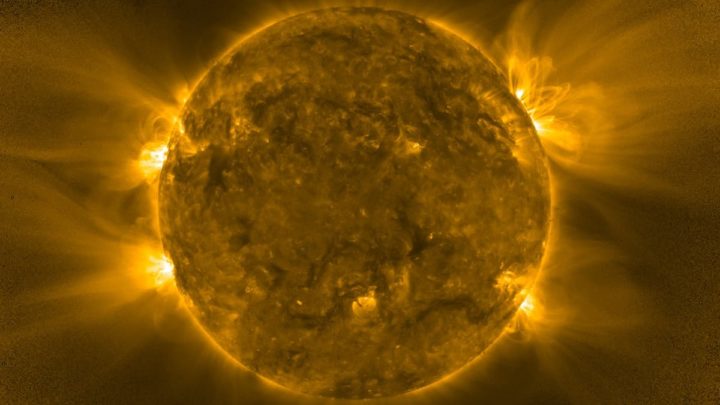 Humanity increasingly knows its star better. The work of the Solar Orbiter probe has contributed to this. The spacecraft made the first of its intimate perihelion passes on March 26, 2022. It flew closer to the Sun than the planet Mercury, reaching its closest approach at just 32% of the Sun-Earth distance.

As we are shown, when passing so close to the Sun, the image capture equipment transmitted material as we have never seen.

Powerful prominences, breathtaking views across the solar poles and a curious solar "hedgehog" are among the spectacular set of images, films and data transmitted by the probe Solar Orbiter since its first close pass by the Sun.

While analysis of the new dataset has only just begun, it is already clear that the ESA-led mission is providing the most extraordinary insights into the Sun's magnetic behavior and how it shapes space weather.

The Solar Orbiter's closest pass by the Sun, known as perihelion, took place on March 26. The spacecraft was within Mercury's orbit, about one-third of the Sun-Earth distance, and its heat shield reached 500°C. But it dissipated that heat with its innovative technology to keep the spacecraft safe and functional.

THE Solar Orbiter carries ten scientific instruments - nine are led by ESA Member States and one by NASA. All these pieces of equipment work closely together to provide unprecedented insight into how our local star "works".

Some are remote sensing instruments that look at the Sun, while others are instruments in-situ that monitor conditions around the spacecraft, allowing scientists to "connect the dots" from what they see happening on the Sun, until Solar Orbiter "feels", at its location, the solar wind millions of kilometers away of the star.

When it comes to perihelion, clearly the closer the spacecraft is to the Sun, the better the details the remote sensing instrument can see. And luckily, the spacecraft also absorbed several solar flares and even a coronal mass ejection directed at Earth, giving it a flavor of real-time space weather forecasting.

This type of observation becomes increasingly important. This is because the energy released by the Sun in storms are a threat for technology and for astronauts.

As mentioned David Berghmansfrom the Royal Observatory of Belgium, principal investigator of the EUI instrument (Extreme Ultraviolet Imager), these pictures are really breathtaking. Thanks to this equipment, it is possible to receive high-resolution images of the lower layers of the Sun's atmosphere, known as the solar corona.

This region is where most of the solar activity that drives space weather takes place.

The task now for the EUI team is to understand what they are seeing. This is not an easy task because Solar Orbiter is revealing so much activity on the Sun on a small scale. Having detected a feature or event that they cannot immediately recognize, they must then scour past solar observations by other space missions to see if anything similar has been seen before.

Solar Orbiter's main scientific objective is to explore the link between the Sun and Earth. heliosphere. The heliosphere is the large space "bubble" that extends beyond the planets of our Solar System. It is filled with electrically charged particles, most of which were expelled by the Sun to form the solar wind. It is the movement of these particles and the associated magnetic fields that create space weather.

To plot the effects of the Sun on the heliosphere, the results of the instruments in-situwhich record the particles and magnetic fields that sweep the spacecraft, must be traced back to events on or near the visible surface of the Sun, which are recorded by the remote sensing instruments.

This is not an easy task, as the magnetic environment around the Sun is highly complex, but the closer the spacecraft can get to the Sun, the less complicated it is to follow the events of particles back to the Sun along the "auto-suns." roads" of the magnetic field lines. The first perihelion was a key test of this and the results so far remain very promising.

On March 21, a few days before perihelion, a cloud of energetic particles swept across the spacecraft. It was detected by the EPD instrument (Energetic Particle Detector). It is important to note that the most energetic arrived first, followed by those with lower and lower energies.

These oscillations are a sign that energetic electrons have reached the spacecraft.

Of the remote sensing instruments, both the EUI and the STIX (X-ray Spectrometer/Telescope) saw events on the Sun that could have been responsible for the release of particles. While the particles flowing into space are what the EPD and RPW detected, it's important to remember that other particles can travel below the event, reaching the lower levels of the Sun's atmosphere. This is where STIX comes in.

There is no doubt that the instrument teams have a lot of work ahead of them. Perihelion was a huge success and generated a vast amount of extraordinary data. And it's just a taste of what's to come. The probe is already sailing through space to align for its next perihelion pass - slightly closer to the Sun - on October 13, at 0.29 times the distance between the Sun and Earth. Before, on the 4th of September, he will make his third "flyby" by Venus.