Officialized today, January 18th, the performance of the Exynos 2200 is something that arouses the curiosity of fans of technology and smartphones. A few hours after the announcement, the first benchmarks of the processor. Despite not showing a great evolution in relation to the Exynos 2100, it must be remembered that these tests were done in an engineering version, not yet the final version. In addition, the data were released by a leaker who did not publish test footage. But new tests and leaks will emerge over the next few days.

The score of Exynos 2200, supposedly from a S22 Ultra, in the multi-core and single-core performance tests of the Geekbench 5 The SoC scored a technical draw. The new chip scored 3516 points in the multi core test and 1108 in single core. THE Exynos 2100 scored 3518 in multi core, getting two points ahead of Exynos 2200. The single-core test is led by the Galaxy S21 Ultra equipped with the Snapdragon 888. 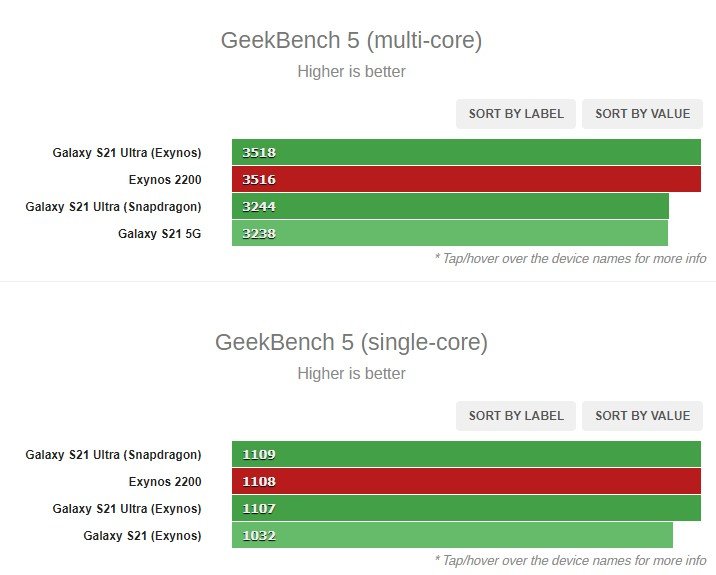 The situation of Exynos 2200 even advances is in the tests of the AnTuTu 9, which serves as a benchmark general of System on a Chip. The new Samsung chip scored 965,874 points, which is 46% more than the Exynos 2100, released last year.

in the test of GFXBench Aztec Ruins (Normal) The Exynos 2200 lost to Xiaomi 12, which uses the Snapdragon 8 Gen 1. THE Exynos scored 109 FPS, while the Snapdragon made 143 FPS. Second, a unidentified smartphone with Snapdragon 888, scoring 116 FPS.

Will the final version of the Exynos 2200 will easily pass the Snapdragon 8 Gen 1 at the GFXBench Aztec Ruins (Normal)? Everything will depend on Samsung solve overheating problems. And we will only be sure of that in the first tests with the Galaxy S22, which will be presented on the 8th of February and deliveries starting on the 24th of the same month.