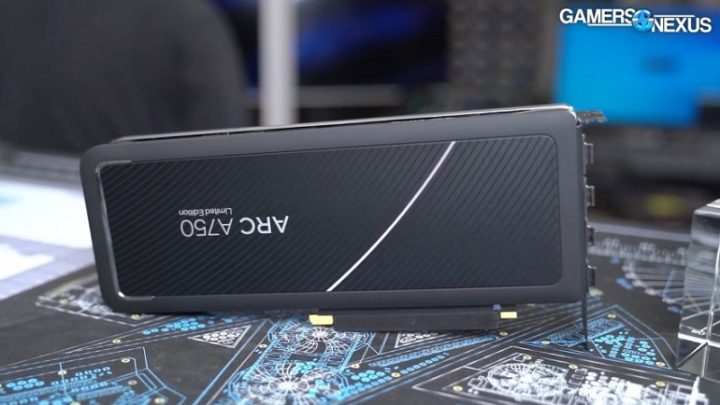 Intel is just a few months away from getting started in the graphics card segment and competing with the giants Nvidia and AMD. However, official information about the new equipment is still very scarce. As such, what reaches the media of the tech world comes from industry sources who end up knowing or having access to some data.

In this sense, the first photograph of the Intel Arc A750 GPU has now been revealed, which will be manufactured in a limited edition format.

Intel Arc A750 image has now been revealed

According to the most recent information, the first photo of the new Intel Arc A750 graphics card has now been revealed. For now, the North American manufacturer has not even officially confirmed this model, having only mentioned the basic model Arc A380. But the truth is that the Arc A750 is a mid-range device that has even been included in the drivers for at least 1 month.

The now revealed image emerges from the channel Gamer Nexus, through its review of the Arc A380, which you can see in the video we left below. And this is so the first review of the Intel Arc desktop graphics card in the United States.

From the revealed photo, we can see that the A750 graphics is a limited edition and features a straight and robust design, free from the gaming aspect that characterizes the various GPUs of other brands.

As such, then it is assumed that the channel managed to have the privilege of being one of the first to get their hands on the Intel Arc A750 graphics, which has not yet been announced. However, there is still not much more information and not even a benchmark test has even been released.

It is estimated that this GPU brings up to 24 Xe cores out of the 32 available on the AMC-G10 graphics chip. It is still expected that the model will initially be launched in China and then should reach the remaining global markets.