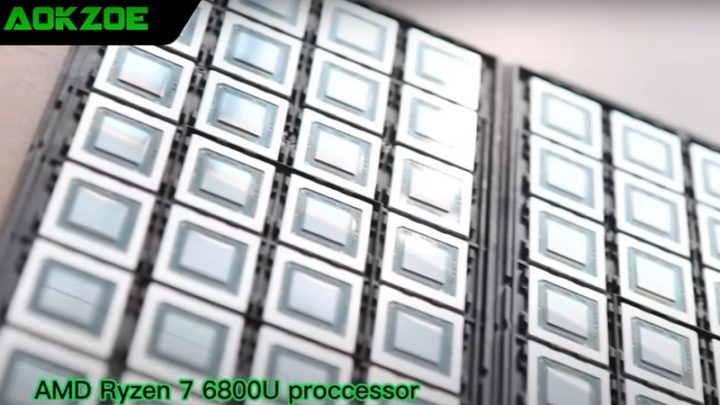 The hardware market has indeed been quite interesting, with several surprises, leaks and daily news about existing products and also those that are yet to come.

But there is now an impressive video that shows us what could be the biggest unboxing in history. Console founder AOKZOE made the “out of the box” no less than 3,520 powerful AMD Ryzen 7 6800U processors.

Some users have indicated that they are having difficulties finding laptops with AMD's Ryzen 6000 processors, especially with the powerful Ryzen 7 6800U model, which has the brand's most powerful integrated graphics, the Radeon 680M.

The new AOKZOE A1 handheld video game console was recently revealed to the world, which will be lucky enough to have the power of the Ryzen 7 6800U processor, reaching 3.38 TFLOPs, and will be a competitor of the Steam Deck that only manages 1.6 TFLOPs.

But we now know that there is at least one reason why notebooks with this CPU are difficult to find. And it's really the console's fault that will use thousands of these chips.

according to recent informationthousands of units of this powerful CPU were sent to the company AOKZOE to carry out the mass production of its console.

But the most impressive thing is that the brand's founder, Chengzhi Zong, released a video where he performs the biggest unboxing ever, taking out of 22 boxes a total of 3,520 AMD Ryzen 7 6800U processors destined for the AOKZOE A1 console. See the video:

These CPUs will then be used for the production of the powerful console, which has already raised 1,157,944 euros on the platform kickstarterwhen initially the expected value was “only” 12,387 euros.

The AOKZOE A1 console then has the AMD Ryzen 7 6800U processor, with Zen 3+ architecture built on TSMC's 6nm process. The CPU features 8 cores, 16 threads and integrated graphics that are far above rival brands.

The first units of this console should arrive at the end of September, especially for those who contributed to Kickstarter. Pricing starts at $899 for a 16GB RAM and 512GB internal storage configuration, going up to $1,299 for a 32GB RAM and 2TB SSD.

You can see more information about the AOKZOE A1 console here.