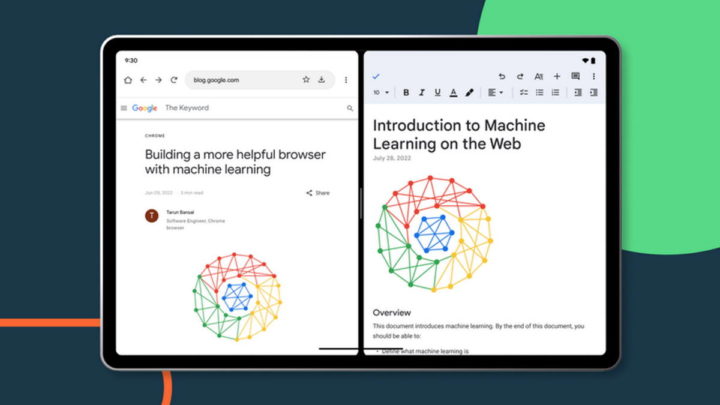 As Android is a system dedicated to multiple platforms, it is natural that Google wants it on smartphones and tablets. The latter have been relegated to the background and received little attention on several fronts.

That seems to have changed with the creation of Android 12L, dedicated to larger screens and now it has had a new confirmation. Google’s productivity suite apps have been updated and made ready to work on tablets and folding screens.

Google's bet on tablets, unfortunately, has seen better days. Android is not yet the perfect system for this type of platform and over the years it has lost what little advantage it had for this hardware to be exploited.

With the arrival of Android 12L, which Google has yet to deliver to many devices, this scenario seems to have changed. Many of the apps needed to be tweaked, another process that the search giant announced now started, especially those in your productivity suite.

Google apps prepared for this reality

This change will soon be visible in Google Drive, Docs, Sheets, Slides and Keep. One of the focuses is that they can be used side by side, on a screen larger than a smartphone, especially a tablet. At the same time, "drag and drop" capabilities have been improved.

With this improvement it becomes simple to copy data from a spreadsheet to another document or to an email message. At the same time, dragging an image from a web page to Keep or another Google app is simple again.

Beyond smartphones, always on bigger screens

Drive has also been improved and now allows you to have windows side by side and even open images and files in another window. This change gives access to better management of files and the folders where they are present. Google went further and also increased keyboard shortcuts, something that is increasingly present on tablets.

With all these changes, Google wants to improve Android on tablets and sets an example with its apps. These are now ready to work on larger screens and certainly much more efficiently and intuitively.