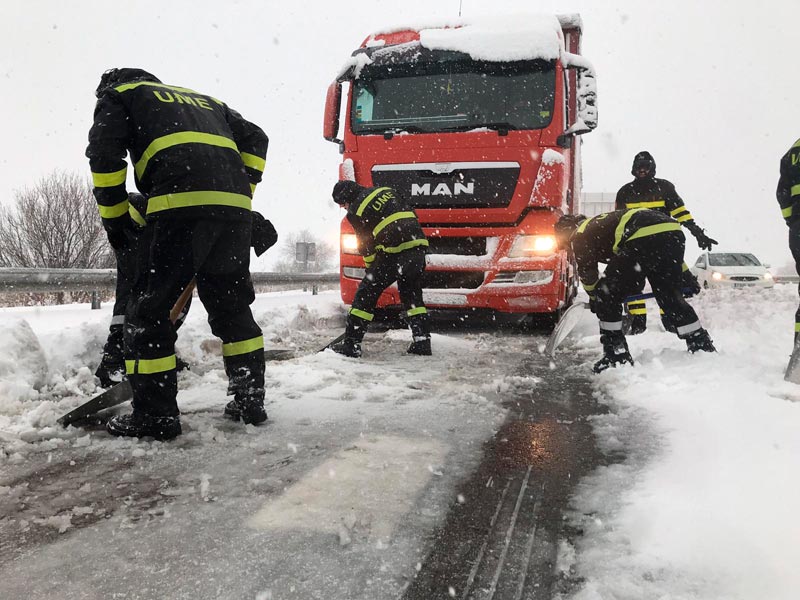 The autonomous Parliament has unanimously approved, with a total of 64 votes in favor, the validation of the decree-law that authorizes the processing of the direct and urgent granting of subsidies destined to finance local Aragonese entities harmed by the stormy Gloria. This adverse meteorological phenomenon, which occurred between January 18 and 26, 2020, caused multiple material damages in the Mediterranean area of ​​Spain, and in the case of Aragon, it greatly affected the province of Teruel. The economic amount amounts to more than 929,000 euros, and as the Minister of the Presidency, Mayte Pérez, announced during the plenary session this Thursday, the Executive trusts that the call will be resolved before the end of the 2021 financial year.

The regional manager has highlighted the need to allocate social and human resources to have sufficient personnel to deal with this type of contingencies and thus be able to anticipate claims of such depth. “The serious material damage that occurred justifies the subsidies that local entities receive from the central government,” he explained, before emphasizing the proposed application of article 44.1 of the Statute of Autonomy of Aragon, which “foresees the possibility that the DGA can take and develop actions based on the decree-law ”. “This validation is a sample of how well it works and how well we use self-government in our Community”, he has settled.

Favorable vote of the entire opposition

The parliamentary groups that make up the opposition have voted favorably, although all have agreed on the expansion and slowness of the administrative bureaucracy by the Government of Spain. “The Ministry reacted late. Two years have passed to solve the consequences and it seems a contradiction to speak now of urgency, “said the general coordinator of IU, Álvaro Sanz, adding that this type of proposal should lead to reflection to” strengthen the capacity of public administrations to act with solvency and speed ”.

Meanwhile, on behalf of Vox, David Arranz has highlighted the principle of inter-territorial solidarity “in which we firmly believe”. “Currently there is no other way to solve this issue,” he clarified, while recalling the existence of the draft of the future Civil Protection and Emergency Care Law of Aragon.

On the part of Citizens, Ramiro Domínguez has described the delay of the bureaucracy as “regrettable”, although he has acknowledged that on this issue the Aragonese Government “is not to blame.” “Many municipal warehouses and sports centers, in addition to agricultural estates, are still destroyed by this storm without having received a single aid yet,” he lamented. In addition, he hopes that the municipalities will receive “as soon as possible” these economic amounts, asking Pérez to “press where he can because he cannot allow this to have lasted up to two years.”

The popular deputy José Antonio Lagüens, who has also criticized the slow arrival of this decree-law, has stated that the victims have not received “a single cent of a euro yet.” In this sense, he wants to know if the total amount “will be enough”, as well as to know “when” they can be charged “and” if 100% of the cost will be covered “. Despite stating that “it is not good” to announce in the media amounts of aid that are then not reflected “neither in the decree-law nor in the future call”, the PP has voted in favor because there is “predictability” that they will to exist aid and because “there has to be a commitment to support all these people, families and administrations”.

The quadripartite, satisfied with the validation

On the other hand, the parties that make up the quadripartite have been satisfied with said validation, highlighting the need to “join forces” to achieve greater effectiveness and efficiency of resources, as well as for inter-administrative cooperation. “This step is a great satisfaction because it means that the Government of Aragon keeps its word,” said the socialist Darío Villagrasa. The Podemos Itxaso Cabrera parliamentarian praised the work carried out by local entities and emergency teams in the face of this type of adversity, underlining that “Aragon has already improved its coordination with emergency teams with a multi-year investment of 15 million euros.”

In addition, Carmen Martínez, on behalf of CHA, has pointed out that this decree “is a sign of the DGA’s empathy with the different local administrations.” “The intervention during the storm Gloria was an example of what should be done in the face of this type of meteorological phenomenon, as happened in January 2021 with Filomena,” he stressed. Finally, from the PAR Esther Peirat has intervened, who has highlighted the obligation to provide the financing of the investments that the entities have been forced to undertake with financial aid.