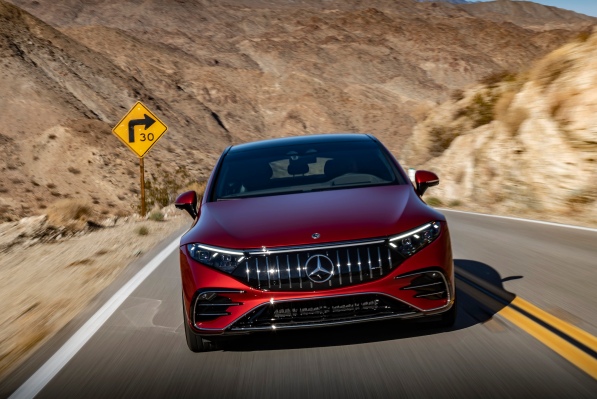 First, there was the dense fog. Then came the snow. But the inclement weather couldn’t derail the AMG iterations of Mercedes’ flagship or its next-gen SL.

Performance, luxury, comfort and technology hit the mark even as the AMG team gets their hands on the Mercedes EQS and the latest SL Roadster.

At its core, the 2022 Mercedes AMG SL Roadster still has a glimpse of the soul that enveloped the original 300 SL Roadster introduced in the late 1950s. Where this vehicle was the top-down transport of choice for Hollywood’s golden age elite, It’s easy to imagine Clooney, Mirren and Run the Jewel’s Killer Mike riding into an event behind the wheel of this newest convertible. 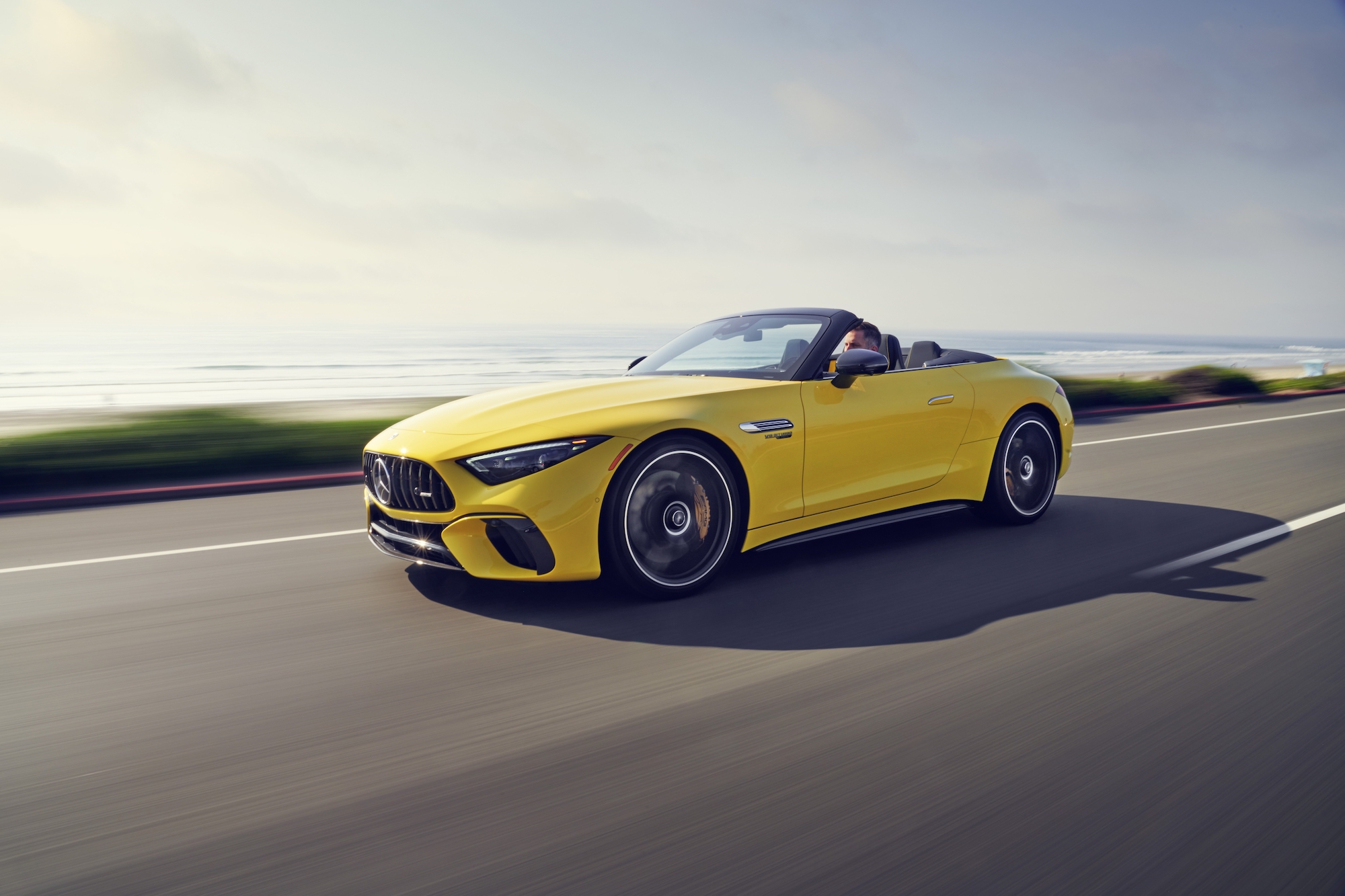 And while the Bondish AMG SL Roadster has roots in the last century, the AMG EQS is Ironman. It’s all about all of today’s technology being used to achieve a goal – while like the Roadster – doing it in style.

Both the AMG SL Roadster and the AMG EQS are new vehicles, and while they share much of the same technology at their core, there is one glaring difference.

The menacing roar of SL is replaced on the EQS by a composite set of sounds. The EQS has instant EV torque, the SL’s impressive displacement and turbos are no match for the EVs’ launch potential.

Mercedes will build handcrafted engines for its AMG lineup to the bitter end. There is no handcrafted electric motor in the AMG EQS. A technician’s signature will not appear on a battery. Meanwhile, the amount of dirt thrown into the air by the EQS is only a fraction of what the V8 roadster will put into our atmosphere over its lifetime. 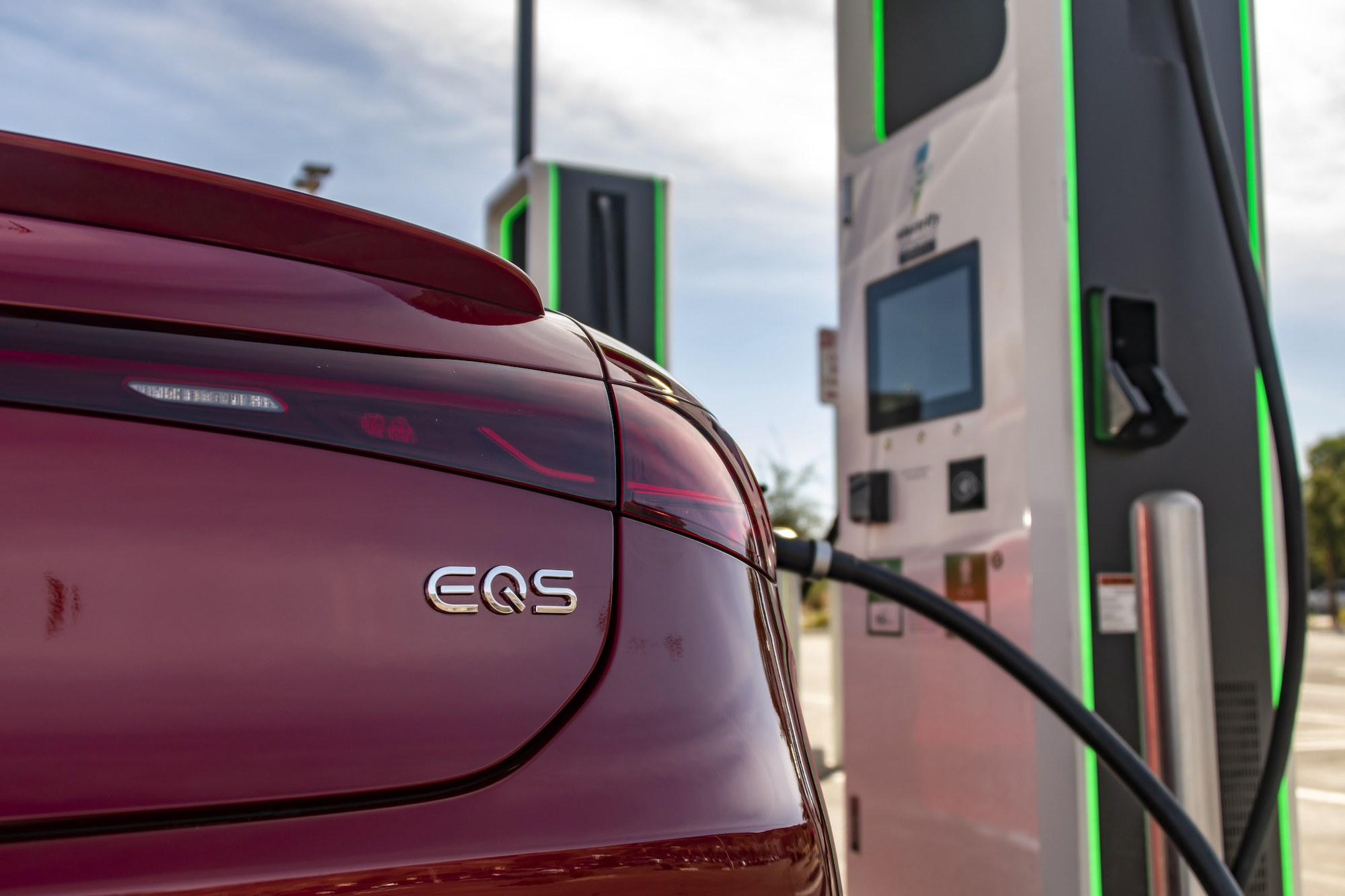 There’s a concern with a vehicle that’s built to be luxury first that it can be a little ruined when given the performance treatment. If a sedan’s primary purpose is to pamper the driver and passengers, stiffening the ride and remapping the throttle so that every little touch results in a snap in the neck, it’s really not achieving its purpose anymore.

EQS fans who also want to go faster, relax. That didn’t happen here. The AMG EQS – the first electric AMG to land in the United States – deftly combines what’s great about the electric luxury sedan with some tweaks from the AMG team.

It’s not just the two electric motors that have received an upgrade. Adjustments to the cooling system, wiring and battery management system of the 107.8 kWh capacity package on the AMG variant also allow the vehicle in Sport and Sport Plus mode to remain at peak performance for longer. During my trip from Palm Springs to Los Angeles, I never felt a loss of energy after several acceleration tests.

This boost also comes with new sounds coupled with in-vehicle acceleration, called the AMG sound experience. I’m a fan of those EV noises. Though artificial, they recreate the audible experience of sudden bursts of speed.

The increase in power is accompanied by the AMG Ride Control air suspension with active dampers. Add in the 4Matic+ all-wheel drive system and rear-wheel steering of up to nine degrees and sharp turns at speed for a controlled and impressive experience considering the size and weight of the vehicle. There is some body roll, but it’s a lot less than what I’ve experienced on the regular EQS.

In addition to all these performance hardware and software tweaks and the new Sport Plus, there is another new mode that luck would have it I was able to test. As we climbed higher into the mountains during the trip, and the road turned from black to gray to snow-covered white, I was able to use the AMG Slippery mode. What worked wonderfully on ice and snow and any loss of traction was short-lived and most likely the result of the AMG EQS running on Michelin Pilot Sport EV summer tires. 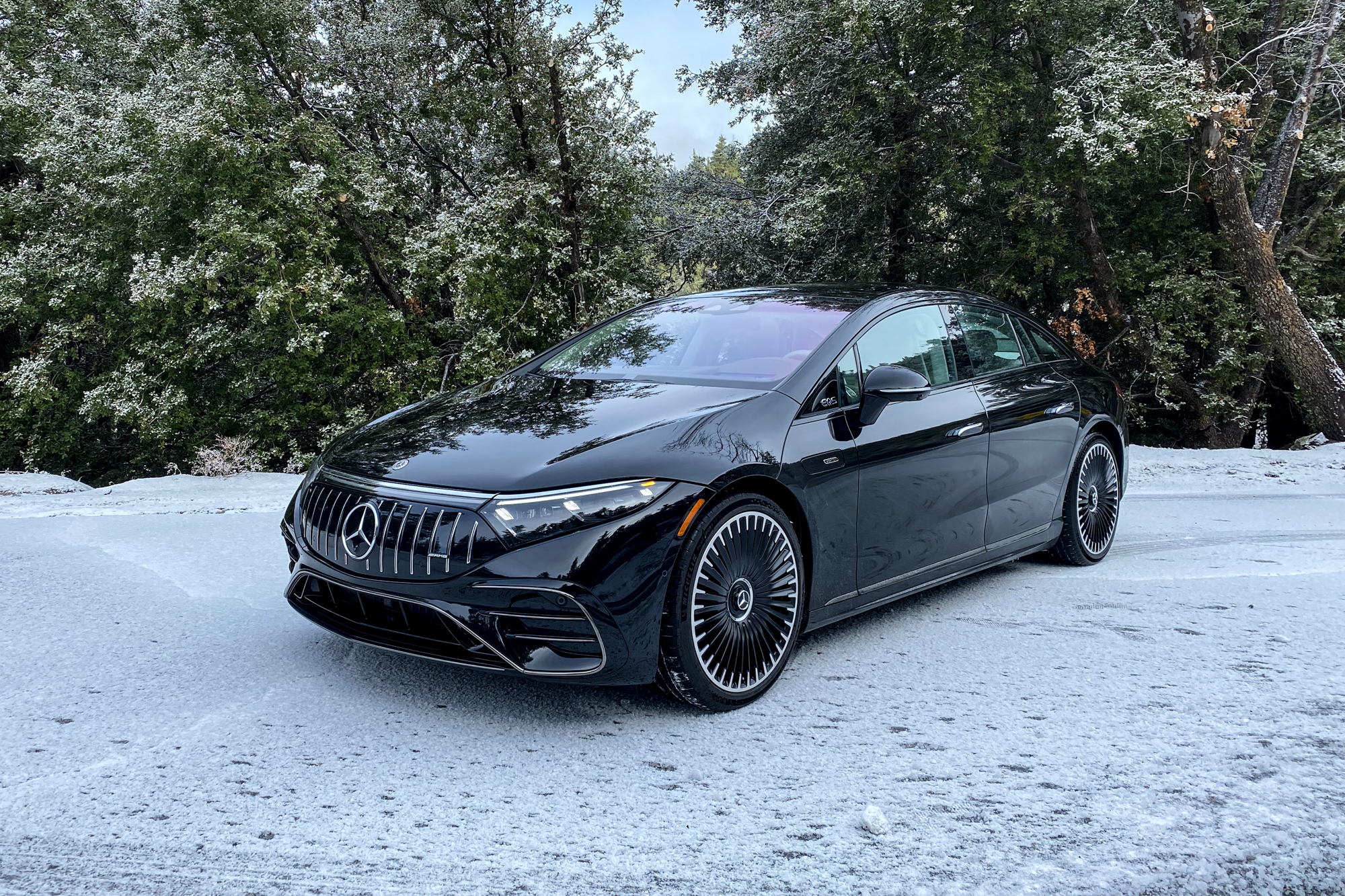 When choosing wheels for this driving program, Mercedes was clearly expecting dry roads and, if not sunny weather, then at least dry weather. Mother Nature had other plans. With winter or even all-season rubber, the AMG EQS would have made even those nervous about driving in icy water more comfortable.

Inside, aside from a few AMG flourishes here and there, it’s the same EQS with the latest MBUX infotainment system and its massive 56-inch Hyperscreen that includes a 12.3-inch instrument cluster, 17-inch touchscreen, 7-inch and 12.3-inch passenger screen. All standard at the AMG trim level. The screen also includes the Zero Layer interface, which features a map with feature widgets that appear as needed. 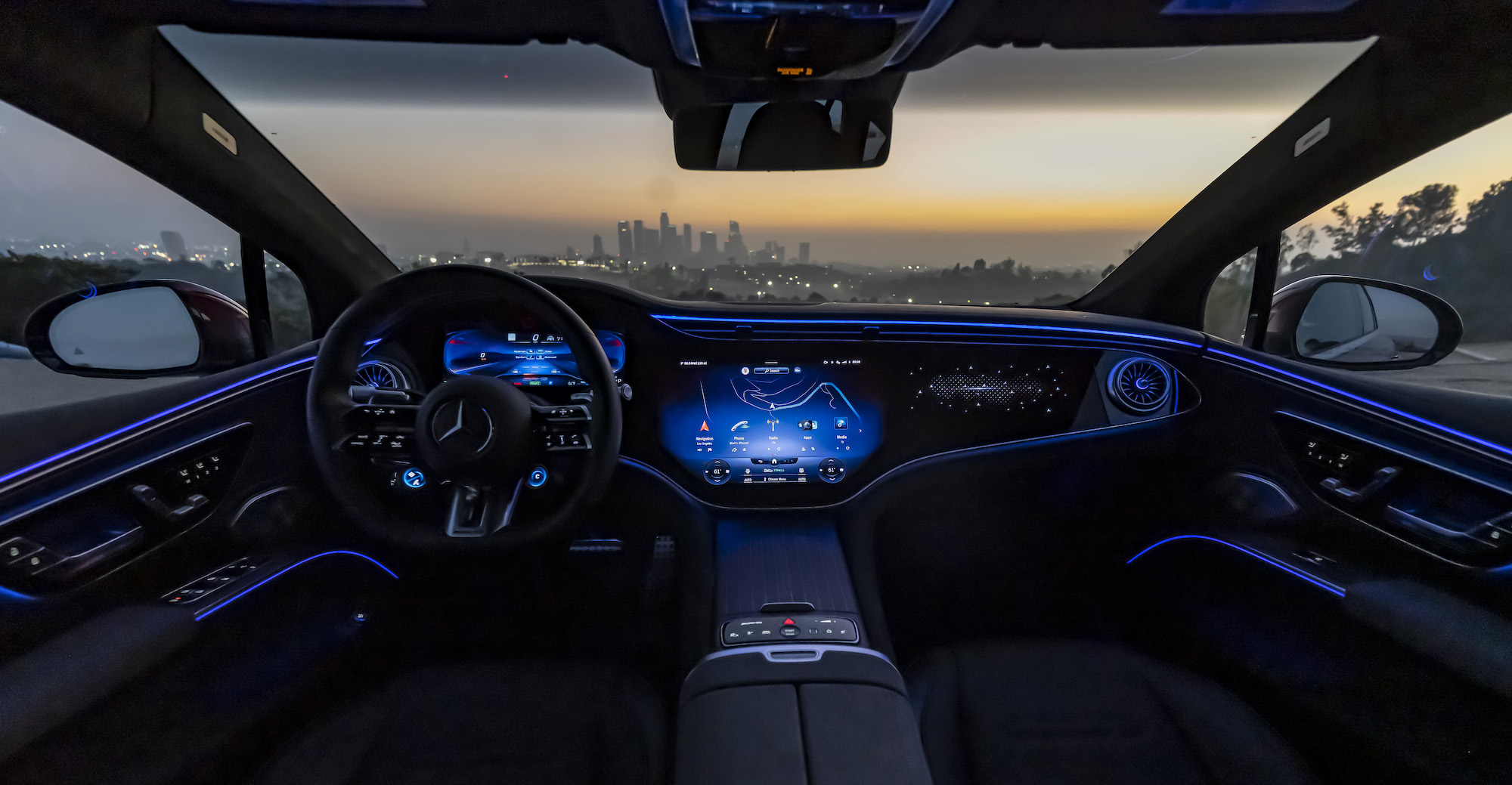 The interior of the Mercedes-AMG EQS 53 4MATIC+ shows off the extensive infotainment system. image credit: Mercedes

The crown jewel of MBUX – the voice assistant – continues to evolve. “Hey Mercedes” along with the Zero Layer interface are essentially the standard for what other automakers should strive to accomplish on the vehicle. A robust voice navigation feature along with a more focused screen.

On more than a few occasions, I’ve noticed that instead of looking for a feature, I’m asking the vehicle to do what I want. Other items, such as media controls that in the previous generation of Mercedes required multiple taps to skip to the next song, were readily presented in the Zero Layer interface hovering over the navigation.

As with the SL Roadster, the voice assistant and Zero Layer combination makes for an enhanced infotainment experience, although I’m still intrigued as to why Mercedes made the screen so wide it’s actually locked by the steering wheel. Of course they changed all the widgets, but it’s still a weird decision beyond the ability to say “hey, look at the size of this screen”. 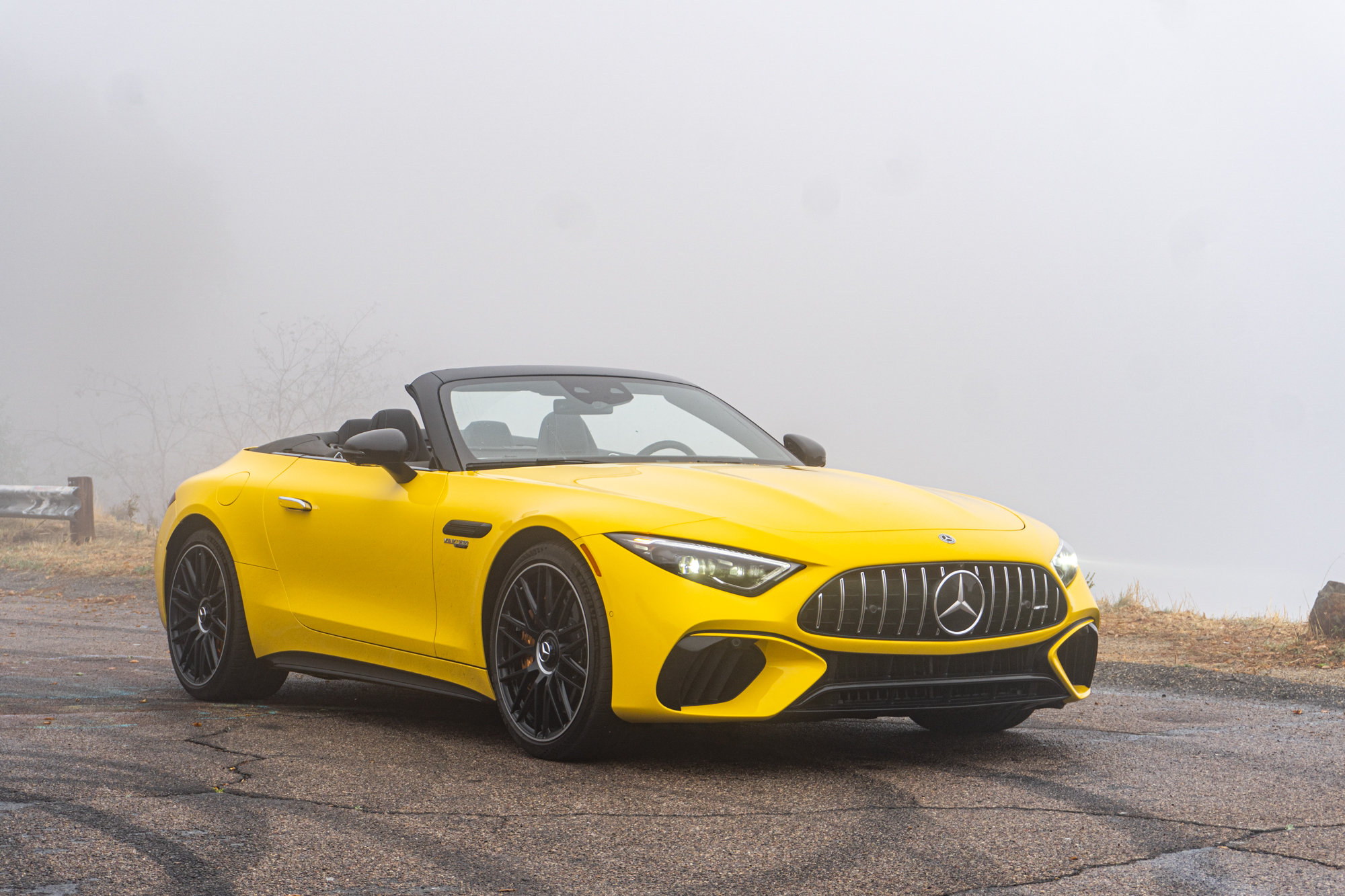 While the balance between luxury and performance errs on the speed and handling side, thanks to up to 577 horsepower and 590 pound-feet of torque in the AMG SL 63 variant, even at slow speeds (thanks to the aforementioned fog), the AMG O SL offers a rich experience from top to bottom.

Mercedes will sell two versions of the vehicle, the AMG SL 55 Roadster with 469 horsepower and 516 pound-feet of torque and the more powerful 63 variant mentioned above. Both are equipped with the automaker’s 4Matic+ all-wheel drive system, powered by handcrafted 4.0-liter V8 Biturbo engines.

The result of all that displacement coupled with the turbos is impressive, well-mannered power that reacts instantly whether stopped or passing slower vehicles. The AMG SL 63 might be the most powerful vehicle, but the AMG SL 55 is probably the better choice as there are very few cases where all that extra power and torque is usable. 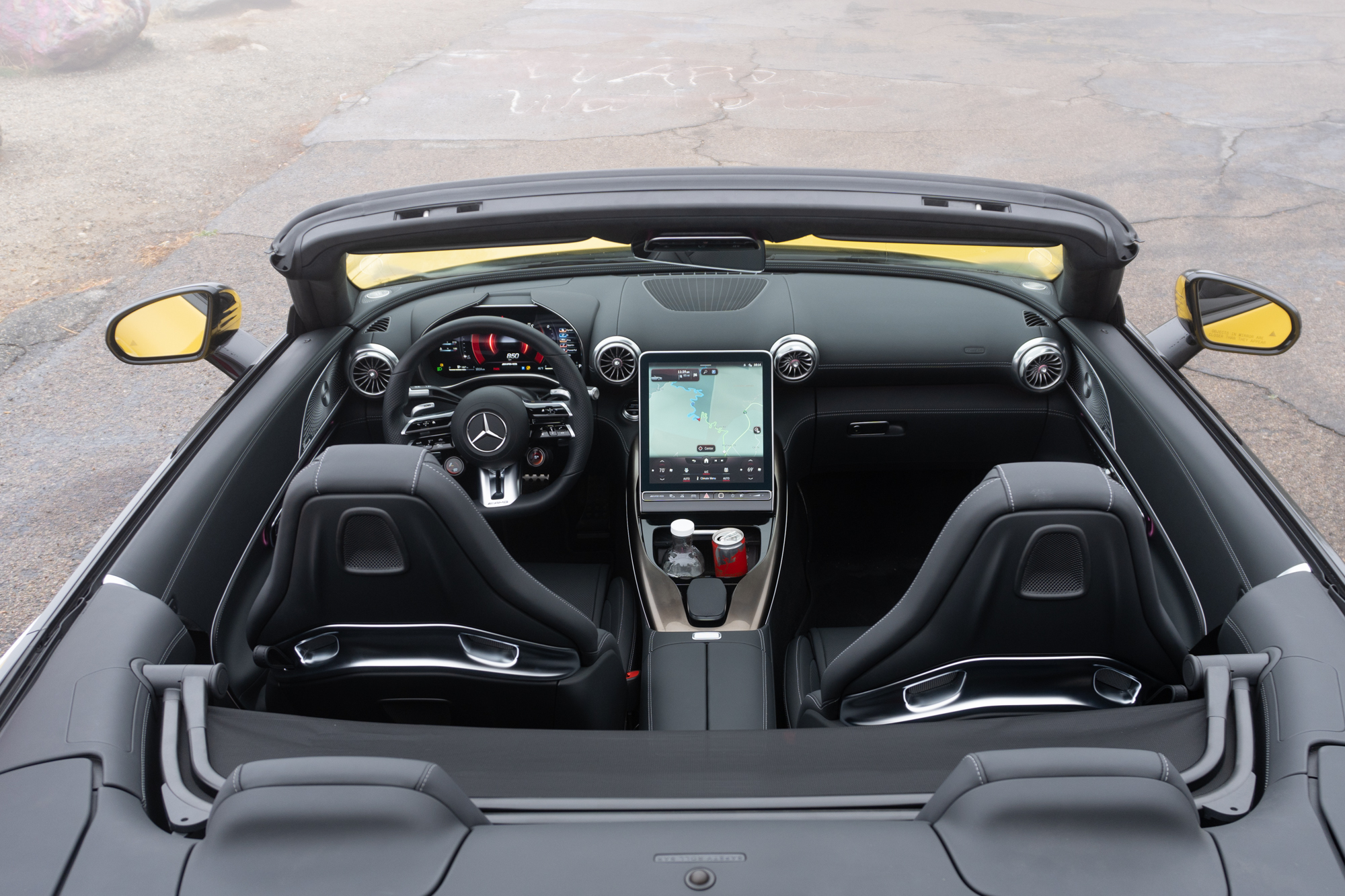 It’s also the least powerful SL Roadster you’ll be able to buy this generation. Mercedes has no plans to release a non-performance version of the roadster. Instead, as with all other Mercedes, it was decided to ensure that this vehicle, when not traversing canyons, is as smooth and luxurious as any other Mercedes. During my tests, I can say it’s about 85% there.

On everyday suburban and urban roads, the AMG SL Roadster delivers an almost glassy ride, but its performance fundamentals are a gentle reminder that this isn’t an S-Class. You’ll feel some of the bumps, holes and ruts in the road. . The positive side of this is the impressive handling which, even on rain-slicked roads, kept the wheels firmly planted on the tarmac with just a little bit of oversteer that only came on when you actually pushed the vehicle. Steering is firm and responsive with no twitching, and the inclusion of rear wheel steering creates the impression of a smaller vehicle both on country roads and when cruising around town. 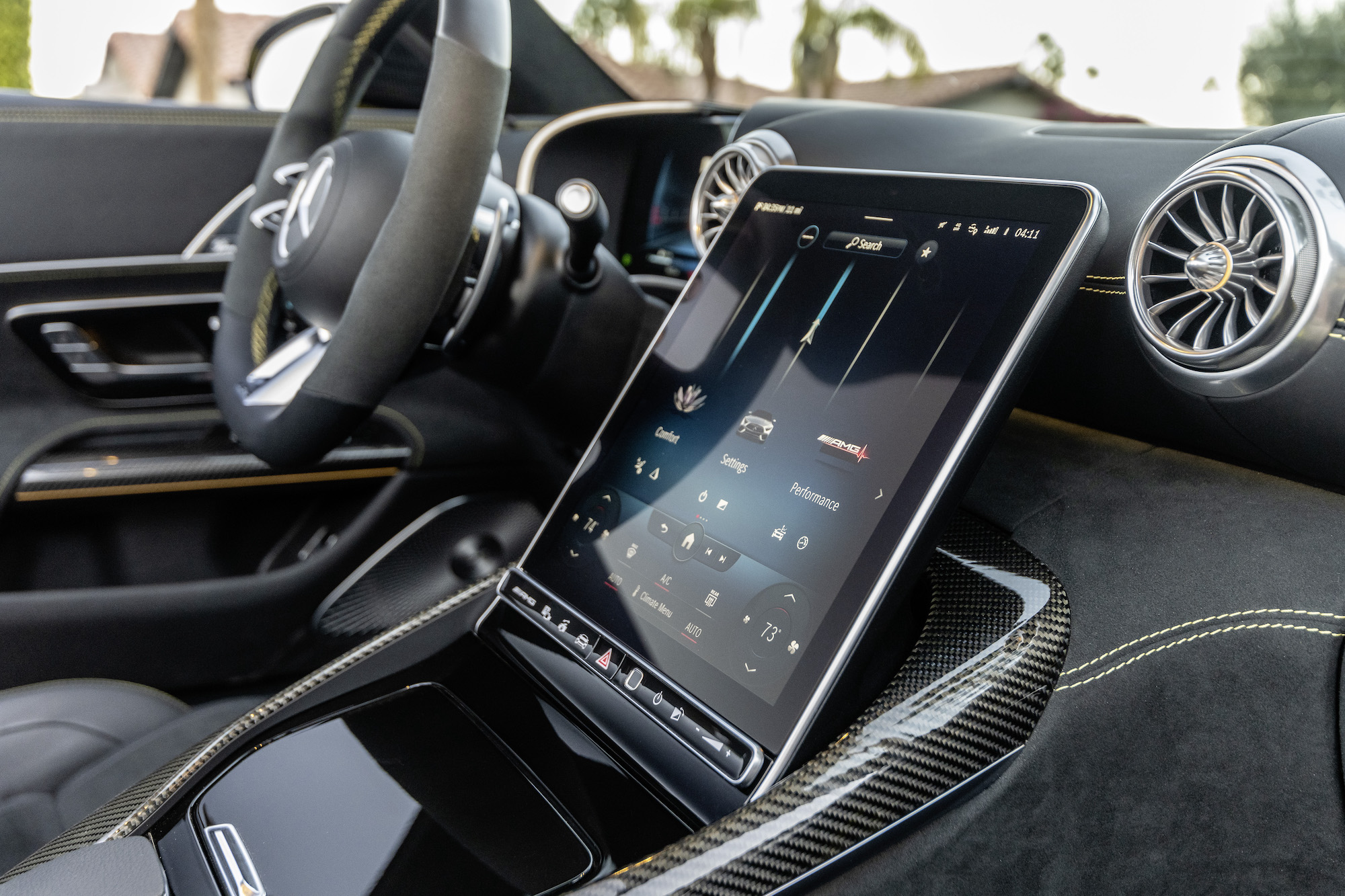 Inside, Mercedes has also equipped the SL with the latest version of its MBUX infotainment system complete with the Zero Layer option. As an extra bonus, due to the potential glare from the sun, the 11.9-inch touchscreen can be tilted back and forth by 12 to 32 degrees. Sun reflections are also why the 12.3-inch instrument cluster has an integrated visor. Unfortunately, neither was needed during my cloudy, foggy trip.

With the SL Roadster, Mercedes has built a proper convertible sports car packed with state-of-the-art technology. Neither side of the vehicle, performance and technology contradict the other. It’s a symbiotic relationship. Essentially, it’s the James Bond of cars. A nod to the past with a wild side that’s already ready with the latest gadget to complete the tuxedo dressed mission.

After driving the AMG EQS and SL vehicles back-to-back over two days, it is interesting to see the beginning of the transition of the AMG vehicles. Mercedes’ performance arm, like the automaker itself, is poised to go all-electric by 2030.

The most impressive thing is to think about the future, I drove the first generation of the SL 300 Roadster. At the time of its release, it was like something from outer space. At some point in the near future, the automaker may introduce another AMG SL, and if Mercedes continues to refine its EV technologies at the pace it is doing now, it will likely be just as innovative and electric.

Plus, you won’t have any problems driving in the snow, even with the top down.