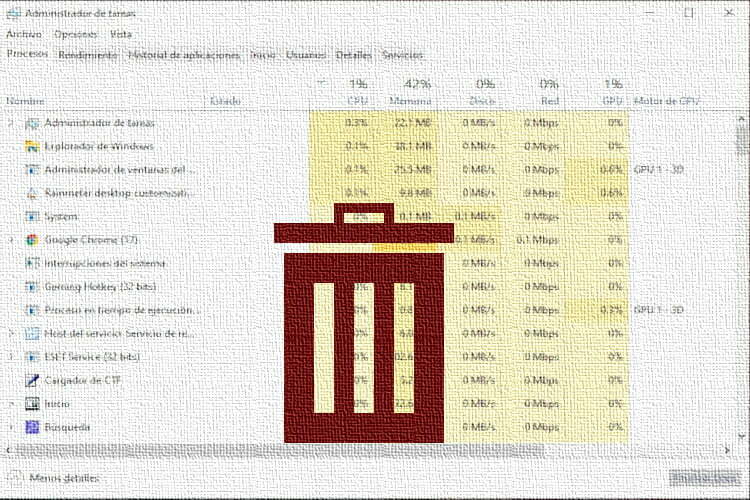 The so-called processes are an intrinsic part of any operating system, constituting a instance of a program that is running on the computer. However, its behavior and identification vary depending on the operating system you are using. In Windows 10, for example, we can identify them by assigning them through the PID or process ID. An easy way to recreate the processes on a computer is by using the Task Manager. Using this tool, you can identify the processes that are most affecting the performance of your PC, for example. The latter could lead us to ask ourselves the following question: How to Eliminate and Terminate the Processes in Windows 10 that are unnecessary or that harm us?

Other reasons to kill and terminate processes in Windows 10

Apart from substantially reducing the performance of our PC, the processes can affect us in many other ways. One of the most common reasons is that they are part of programs that run malware on our PC, which can pose a very serious threat if we do not know how to stop and eliminate these processes. Another reasonable reason is that there is no visual interface that allows us to close a process or program that is simply not to our liking.

First, should not perform a reboot forced from your computer because this action leads to greater inconveniences than you probably have thought. Among them, irreparable damage to your PC and the file system, that is why in our article we show you in a few steps how kill a process in Windows 10.

First of all, as we mentioned earlier through the Task Manager, the user has the ability to kill a process in a simple way. Follow the instructions below to continue:

Step 1 Press the “Ctrl + Alt + Delete” key or the “Window + X” key and click on the Task Manager option.

Step 3 Select a process that you want to kill and do one of the following:

A somewhat more “advanced” solution is to kill a process using the Command Prompt o Command Console. To do this, you must proceed as follows:

Step 2 Then type “tasklist” at the command prompt and press the “Enter” key. This command displays all the processes that are currently running on your system.

Step 3A) To kill the process using the process / image name. to) Type the command below that you want to use at the command prompt, to kill only one process, and hit the Enter key. taskkill / IM name of process / F

For instance: To remove Notepad, run the command as taskkill / IM notepad.exe / F, where / F is used to forcefully terminate the process.

Step 3B) To kill the process using PID to) Type the command below that you want to use at the command prompt, to kill only one process, and hit the Enter key. taskkill / PID PID / F

For instance: If you want to kill Notepad, run the command like, taskkill / PID 7324 / F, where / F is used to forcefully terminate the process.

b) Finally concatenate the commands you want to use at the command prompt to kill multiple processes simultaneously and press the Enter key. taskkill / PID PID / PID PID / F

Throughout our article you have learned how to eliminate and terminate processes in Windows 10, either through the Task Manager or through the Command Console. This will mean that you will have greater control of what happens on your PC by strengthening your computing skills. To learn much more and improve read our articles on the subject.