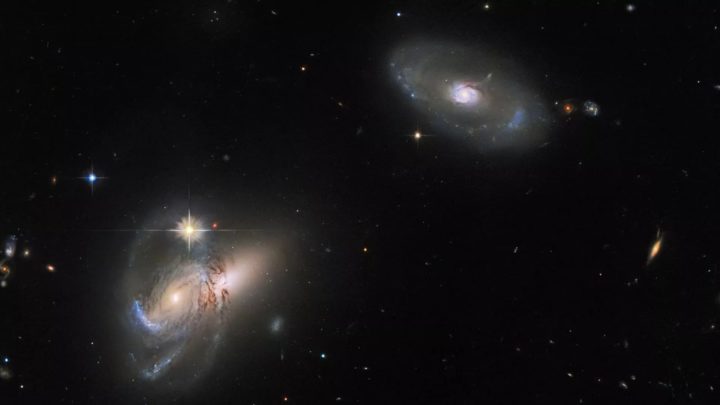 We live in a galaxy, the Milky Way, which looks like it expires. This classification has to do with its morphology, as it presents a clear spiral structure around its nucleus when viewed perpendicularly to its plane. However, there are other galaxies with different shapes and Hubble captured a photo with several galaxies of diverse appearance.

The galaxy sample also illustrates the wide variety of names galaxies have. Let’s get to know this galactic diversity.

NASA's "old" space telescope operated by various space agencies, Hubble, has once again shown how we are surrounded by potential sites with life. If in our galaxy, the Milky Way, we still know very little about everything that composes it, observing other galaxies shows how small we really are in such a vast universe.

The image now shown by the telescope captures several spiral and irregular galaxies in the constellation of Hercules. The most remarkable galaxy, called LEDA 58109 or MCG+07-34-030, is alone at the top right of the image. It has a bright core and exhibits a spiral structure, similar to our own Milky Way galaxy.

These two objects are further from Earth than LEDA 58109. In the new Hubble image, the galaxy SDSS J162557.25+435743.5 appears to peak to the right behind the AGN - which is characterized by a much higher-than-normal luminosity , powered by the accretion of matter by a supermassive black hole at the center of its host galaxy.

Typically, galaxies are classified as spirals and ellipticals. However, this new Hubble image captures a diverse number of galaxies, highlighting the complexity of classifying these collections of stars, dust and dark matter.

The sample of galaxies here also illustrates the wide variety of names galaxies have": Some relatively short, like LEDA 58109, and some very long and difficult to remember, like the two galaxies on the left.

This is due to the variety of cataloging systems that trace celestial objects in the night sky. No catalog is exhaustive, and they cover overlapping regions of the sky, so many galaxies belong to many different catalogs.

Referred to ESA in the shared information on the Hubble capture.