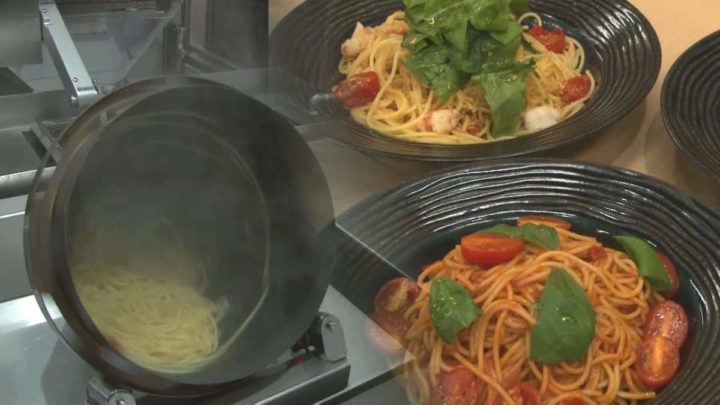 It is now commonplace to see robots performing human tasks – from warehouse workers to surgeons who perform highly accurate processes. Today, we show you the machine responsible for the pasta that a restaurant in Japan serves to its customers.

The E Vino Spaghetti can be found in Tokyo and promises to surprise.

Tokyo is home to the E Vino Spaghetti restaurant, and although it could be just another ode to Italian cuisine, it promises to surprise its visitors. After all, the kitchen is not being led, as usual, by one person…

The boss is there, but it's an AI powered robot, the P-Robo. In addition to preparing customer orders, the robot developed by the robotics company TechMagicin partnership with Pronto Corporation, is also capable of cleaning the kitchen after cooking.

Equipped with four pans to ensure its efficiency, the robot cook starts by defrosting the dough pieces in 10 seconds, heating them while preparing the sauces. The first course takes about 75 seconds to prepare, and the following take only 45 seconds. As its name implies, and being fully operational, the P-Robo can cook 90 meals an hour.

Since E Vino Spaghetti is not a fully automated restaurant, the dishes reach customers through human hands. In addition, salads and other menu products also lack human intervention.

Japan is distinctly home to kitchen robots and the E Vino Spaghetti in Tokyo has been proudly home to the fourth generation P-Robo for the past four years.

P-Robo for restaurants in Japan and maybe the world

If there are already robots helping complex surgical processes, it is not surprising that they may, in the future, integrate teams of cooks, guaranteeing the efficiency and speed that characterizes these machines. In fact, Pronto Corporation's plan calls for P-Robo to reach other restaurants, aiming for 50 over the next five years.

According to TechMagic, 60-70% of a restaurant's costs reside in labor and supply. Therefore, robot cooks could represent a solution in this sense as well.