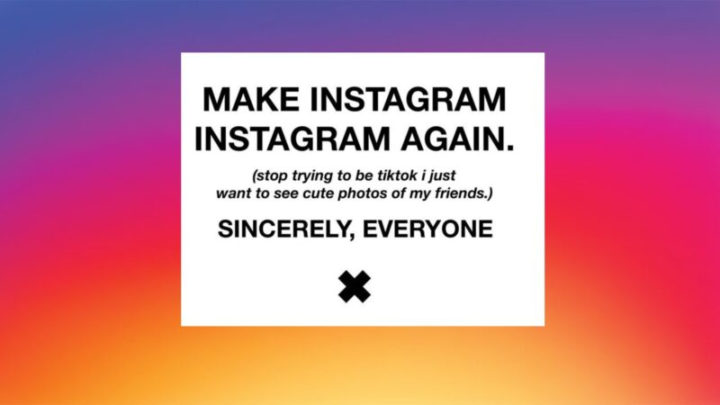 Instagram has adapted its platform and concentrated elements from others, in order to respond to what users seem to like. Recently, several people, famous and not only, reacted negatively and asked those responsible to return to the original concept of the platform.

The CEO of the social network has already responded to users.

In the opinion of users, Instagram is losing focus from its initial objective, photographs, and valuing other more dynamic content, such as videos and Reels. Because they were detecting a change, recently, a wave of reactions emerged, through which users asked to return to the original format.

With the motto “Make Instagram Instagram Again”, personalities such as Kim Kardashian, Kylie Jenner and Chrissy Teigen, as well as users who are not known to the general public, shared their discontent with the direction of the social network.

On Twitter, in addition to the motto that circulated on Instagram, a user said that the social network should stop “trying to be TikTok”, as users only want to see “beautiful photos” of friends, instead of content posted on Reels. Overall, people are asking for the platform to bring back the experience it once had.

In view of the reactions of users regarding the changes in the social network, Adam Mosseri, CEO of the platform, clarified that he is focusing on both photographs and videos, not discarding any of the content.

I wanted to address a few things we're working on to make Instagram a better experience.

Please let me know what you think 👇🏼 pic.twitter.com/x1If5qrCyS

In this video shared on Twitter, the CEO explains the new features of the application. Despite being in testing and only available to a few people, one of the key elements is the vertical screen feed, which will be applied to photos and videos.

In order to prove that he is not discarding photography, Adam Mosseri revealed that he is investing heavily in images – but also in online videos.