Since introducing Windows 11, Microsoft has insisted on forcing users to follow a set of very strict obligations that leave many PCs out. This has been a big problem for many, but solutions seem to grow.

Even with some obligations that make sense, others are strange and few want to fulfill, even with Microsoft’s appointment. This process is now easier with the new version of the Rufus app. It can install Windows 11 without Microsoft’s requirements.

Rufus is a true Swiss Army knife when it comes to installing new operating systems. It manages to create the much-desired installation pens, in a simple and direct process, without the user having any intervention.

This gains special strength when it comes to Windows 11, given that the Rufus app has some special extras. This was able to bypass some of the obligations of the new Microsoft system, associated with additional security permissions.

This app that so many use has now gained an even more important novelty when it comes to installing Windows 11. The latest test version has managed to circumvent more of Microsoft's impositions, which again opens up your system to even more users.

Specifically, version 3.19 Beta of Rufus started to dispense with the use of a Microsoft account and started to refuse to send user data to Microsoft. These two new features are particularly important as they are one of the biggest current complaints in the Windows 11 installation process. 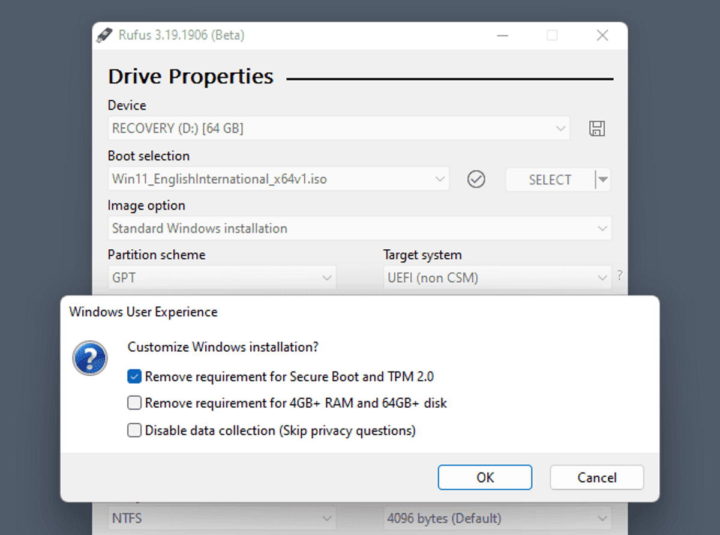 Even More Tools for Windows 11

With this novelty, the Rufus app now has this valence, which is added to the exemption of Secure Boot, TPM 2.0 and many more obligations imposed. In some cases, the user does not even see Microsoft's requests, and the default response is given to avoid data collection.

Anyone who wants to use this novelty can do so now, just download the beta version from Rufus. The news is clearly visible and creating the Windows 11 installation pen remains simple and fast, without any more complicated configuration. Give it a try and you will certainly start using this new batch of options.