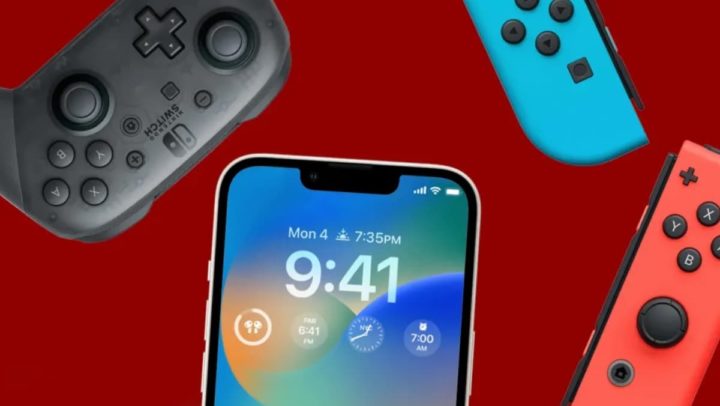 Apple with the presentation of iOS 16 brought many new features and some of them were not mentioned prominently, or were simply not presented. However, after the developers installed the beta version and after further analysis, more details were found. For example, with iOS 16 users will be able to use their Nintendo Joy-Con controllers to play games on iPhone and iPad.

After Apple in the past opened the doors to various controllers from Sony and Microsoft, now the range has increased considerably.

Yesterday at WWDC 2022, Apple discussed how iOS 16 will improve the gaming experience with updated Metal 3 graphics, made it known that it has made improvements to Game Center, in addition to other optimizations in the gaming area. Now, after a closer look, iOS 16 will also support more third-party gaming controllers, namely Nintendo's Joy-Con and Pro controllers.

Programmer Riley Testut found he could play games with Nintendo Switch Joy-Con and Pro controllers on iPhones and iPads running the latest iOS 16 beta. The update also supports 8Bitdo, BADA MOGA XP5-X Plus, and Logitech F710 Gamepad controllers. , according to the internal code detected by 9to5Mac.

Can confirm they work perfectly with Delta 😍 pic.twitter.com/p8u1sdjvTt

iOS 16 lets you pair the Joy-Cons as a controller or separately, and you can customize the controls in Bluetooth settings. You can even dynamically switch between using both Joy-Cons as a single controller or two separate controllers by pressing and holding the screenshot and home buttons.

Apple seriously killed it with this implementation, this is incredible

Said Testut, referring that Apple has brought something fantastic to its operating systems.

Still on the same topic, another user left an answer where he mentioned that Apple had apparently already started support for Switch Pro controllers last year with macOS 12.

It looks like Apple will be able to add support for more controllers without needing to ship a new version of iOS, using something called "mobile assets". This is similar to another new feature that allows Apple to automatically release security updates between iOS releases.