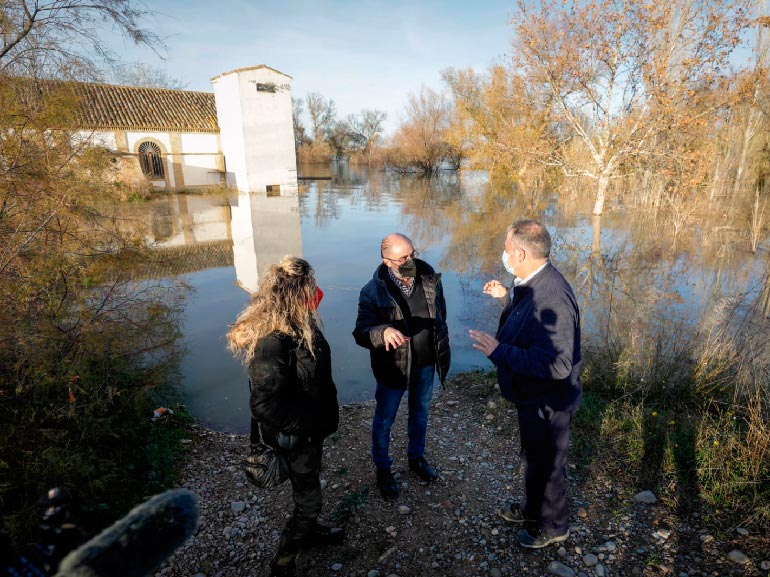 The president of Aragon, Javier Lambán, is going to request the declaration of a catastrophic zone in the riverside towns affected by the extraordinary flood of the Ebro. Although it is still early to make concrete evaluations of damage in the “hundreds or thousands” of flooded hectares, the The leader of the Executive has already conveyed to Pedro Sánchez, together with the president of Navarra, María Chivite, his intention to process this request.

Likewise, the councilors Mayte Pérez and Joaquín Olona have also met with the agricultural organizations to share all the information available at this time and “reassure them” that “they will proceed to assess the damage and study the appropriate measures to adopt.” . “Regardless of whether the priority continues to be the preservation of urban centers, we are already thinking about the day after, in assessing the damage and compensating those affected,” said Lambán. Of the 20,000 hectares that are in the flood zone, 15,000 are cultivated and the forecast today is that about 12,000 will be affected.

The Aragonese president has participated in the Cecopi meeting this Monday, once the peak of the flood has already entered the Community and Heifers has passed, exceeding the height of the flood of 2015, although without meeting “the worst forecasts” . “It gives the impression that the channel is stabilized in Boquiñeni and Pradilla, where overflows could occur that flood the urban centers. It seems unlikely that they could be flooded. If I had to make forecasts, I would say that they are not going to flood, but we are going to keep the mechanisms active, “he said.

In fact, Lambán has recognized that the “prudent and well planned” eviction of 55 people in Novillas has finally been “ultimately unnecessary”, foreseeing that it will not be necessary to evacuate other urban areas. “As a first assessment, it is being much better than what we expected yesterday in the worst case scenario. There has been no need to evict any municipality nor does it seem that they will be, “added the regional president, who has valued the efforts of the mayors and residents, who” are the ones who know the river the most and best. “

The peak of the flood entered Novillas this Sunday, where the maximum value reached at the gauging station was 8.51 meters. During the morning of this Monday it is expected to reach Pradilla, where it has reached 9.1 meters, and Boquiñeni. In general, it is expected that the flood will reach levels somewhat higher than or similar to those registered in the avenue in 2015 in the middle section of the Ebro. During the early morning a warning has been registered for an isolated sheep farm between Novillas and Gallur and another due to water entering the esplanade of the Gallur fairgrounds, an incident that has been in charge of the Military Emergency Unit. The operation this morning was made up of 444 people belonging to 63 endowments of the different administrations involved.