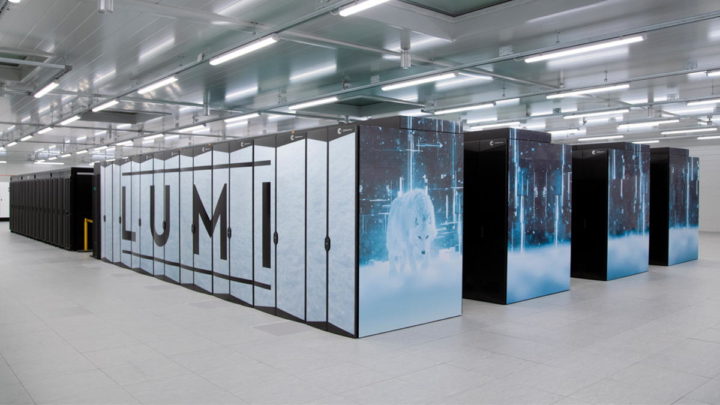 Despite not being visible, there is a silent race to conquer the top of processing in supercomputers. With each passing year, more powerful machines with greater computing power appear, accessible to researchers and other scientists.

Europe has been far from the top places, but has now assumed a new position. Lumi is the latest proposal to be created, taking back a prominent place for Europe. It got the third position and is one of the fastest and most ecological on the planet.

The list of the 500 most powerful supercomputers on the planet has been changing almost constantly. There are always new proposals emerging and occupying top positions, guaranteeing more and more power and processing power.

One of the newest entries is Lumi, a pre-exascale system which belongs to EuroHPC, the European High Performance Computing Consortium. Started in 2020, this supercomputer has already reached 151.9 petaFLOPS of performance, and it is expected that in the coming weeks it will reach 375 petaFLOPS.

Lumi's power will later be increased again, being raised to 550 petaFLOPS processing. With the current value of 375 petaFLOPS, it ranks third in the TOP500 of the most powerful supercomputers in the world.

With this milestone, Summit (200 petaFLOPS) has dropped to fourth place on the list. The podium is topped by the new American Frontier exascale system (1.1 exaFLOPS), followed by the pre-exascale Fugaku Japanese supercomputer (442.01 petaFLOPS).

Upon reaching 550 petaFLOPS of processing, Lumi will climb one more position in the list of the 500 most powerful supercomputers. It will overtake the Japanese machine and take second position. Its structure will allow it to remain in this position for a long time.

Housed at the IT Center for Science in Kajaani, it was built by Hewlett Packard Enterprise (HPE). The system is based on the Cray EX architecture which is combined with 3rd generation AMD EPYC "Trento" CPUs along with AMD MI250X accelerators and Sligshot-11 interconnects. It will be complemented with a storage of 17 petabytes.

Read more about the supercomputer which, in @EuroHPC_JU director Anders Dam Jensen's words, is "taking the European #HPC game to the next level" as it is both the fastest and the greenest in Europe!

In addition, Lumi will run on 100% hydroelectric power and will feature an advanced cooling system. This will allow part of the heat to be used to heat some buildings in the region.

To replicate the Lumi's computing power with regular computers, it would take 1.5 million high-end laptops. And these would not fit in a room, but would form a tower over 23 km high.

Lumi's computing resources will be made available to researchers across Europe to accelerate scientific advances. They will focus on areas such as climate change, medicine, artificial intelligence and quantum computing. In addition, around 20% of its capacity will be reserved for use by small and medium-sized companies.