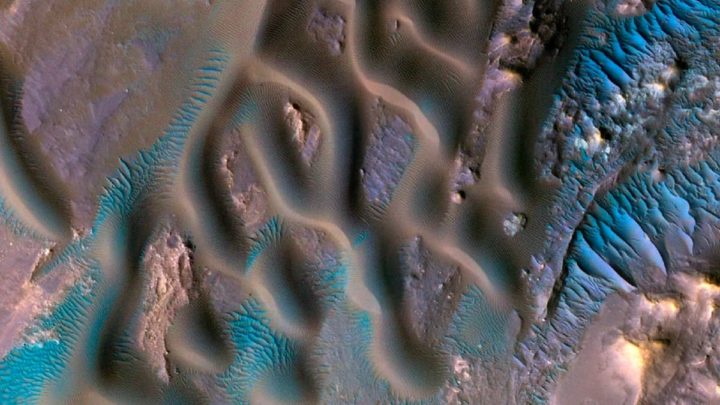 NASA’s orbiter sent to Mars, the Mars Reconnaissance Orbiter (MRO), has captured a fantastic image of the red planet’s dunes. The detail is really impressive. In its new image, MRO shows piles of sand in different sizes and colors near the center of Gamboa Crater, an impact crater in the Martian soil.

This probe was sent with the purpose of looking for evidence of the existence of water, in the remote past of Mars.

Managed and led by NASA's Jet Propulsion Laboratory, this mission, which involves the Mars Reconnaissance Orbiter spacecraft, has been studying the Martian atmosphere and terrain from its orbit since 2006. The mission has sent back thousands of stunning images of the Martian surface. to help scientists learn more about the Red Planet.

According to information sharing on this image, the site is just under a kilometer long and is covered by winding ridges and individual domes of sand, 10 meters apart.

According to the US space agency, the largest and brightest formations are called "Transverse Wind Bridges" (TAR) and are covered by coarser sand. In the artificially colored image (so that scientists can study the properties of surface materials) it is possible to see the TARs in a blue-green more pronounced than the other areas.

New from Mars Reconnaissance Orbiter, an enhanced color view of sand dunes and ripples in Gamboa Crater. The area shown is about half a mile (about a kilometer) across.

The image, in addition to its spatial beauty, allows us to obtain a lot of information about the elements that make up the soil of this planet in the solar system.

All these different features can indicate which way the wind was blowing when they formed. Being able to study this variety so closely allows us to see their relationships and compare and contrast features to examine what they are made of and how they formed.

Earlier this year, NASA announced the extension of the MRO mission. In the extended mission, MRO will study the evolution of the surface of Mars, ice, active geology, atmosphere and climate. In addition, MRO will continue to provide an important data relay service to other missions to Mars.

As we have been showing, this spacecraft is responsible for the most incredible images we have received of the red planet.