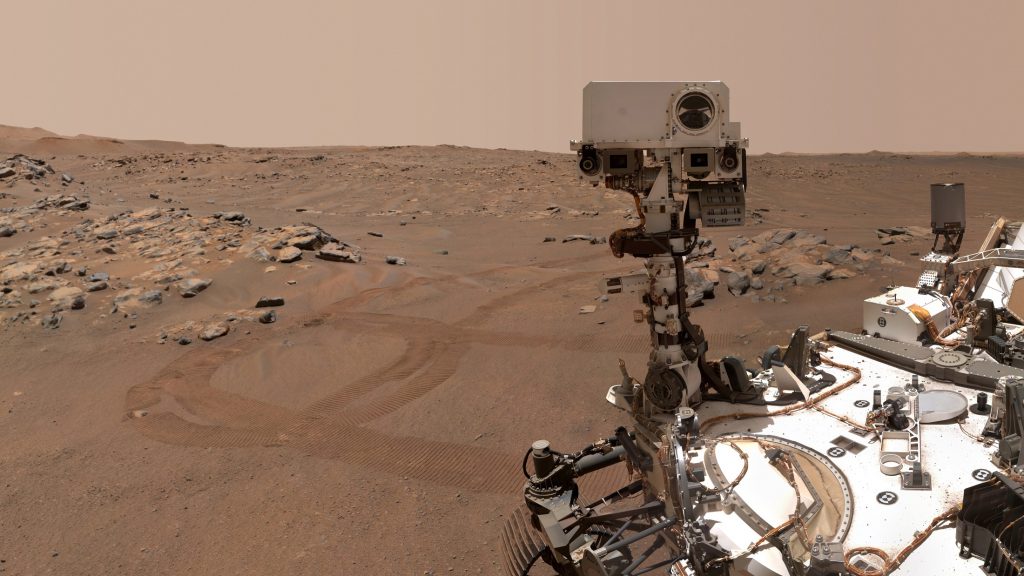 the NASA published seemingly non-stop Mars images. The recordings of the Mars vehicles Curiosity or Perseverance not only show the surface of a barren world far away from our own. Rather, the images presented here show how man tries to recognize his own world on a strange planet.

Because the recordings of the red planet show above all geological similarity to dry areas on our earth. Be it dunes, valleys or mountain ranges: Mars is more earth than we think.

Perseverance is the latest Mars rover sent by NASA to the red planet. His images should give us a better understanding of the nature of the planet. The special feature: The rover landed accompanied by the small drone “Ingenuity”.

The rover is drilling holes and collecting data on whether life was even possible on Mars. According to new findings, Mars was never intended for this. The vehicle’s journey can be followed on NASA’s Jet Propulsion Laboratory (JPL) official website.

The image of NASA’s Rover “Curiosity” shows the so-called “Namib Dune”. It looks surprisingly earthly, as if the picture was taken somewhere in the Sahara. In fact, “Curiosity” is looking at a dune about four meters high on Mars.

The rover already examined active sand dunes in 2015 and 2016. Such wandering dunes were found for the first time outside of the earth by “Curiosity”. The so-called Bargnold Dunes move from west to east at about one meter per year.

The Mars rover “Perseverance” took this picture of the landscape on its foray. The boulder field shows how hostile to life Mars is. More than that, lighting conditions weren’t balanced; the sky and the light is orange. Mars will probably show up to the first humans like it does in this photograph.

Perseverance captured this image using the Mastcam-Z Camera. These are two cameras installed at the highest point of the rover.

#4 Changing times of the day

NASA’s Mars rover “Curiosity” has been in Gale Crater since 2014 and takes pictures of it. The special feature: It not only shows the landscape features of the 154-kilometer-wide crater, but also the changing times of the day.

Two light sources can be seen in the picture. “Curiosity” took a picture in the morning and one in the evening. These images were post-colored by the scientists back on Earth and superimposed. The play of colors is merely an artistic interpretation and is intended to help researchers to better recognize soil profiles.

Curiosity captured this image of Mars on the 580th day, or Sol, of its mission. NASA uses such images to find evidence that water once existed on the planet. The picture shows Mount Sharp.

For this, the recordings of the rover are post-colored. The sky appears as blue as on Earth, in fact it would be more orange and darker due to the atmospheric composition. The stones in the foreground also look as if the picture was taken in a desert region somewhere on earth.

The all-too-terrestrial colors help geologists study the rock better. Such a strategy is also referred to as “white balancing” at NASA. Such a white balance also ensures that the sky appears blue and parts of the stones have differentiated color shades.

Water is life. According to this principle, scientists have been looking for signs that water once existed on Mars for decades. Should it also be shown that fossil microbacterial life is found in the deposits, it will prove that life is possible anywhere in the universe.

A special maker for this are images of Mars sediments, which suggest that water once flowed on the surface. The sediment deposits shown here are said to lie at the bottom of a former lake.

#7 Sunset on another world

The Martian atmosphere contains a lot of dust. These fine particles also have an effect on the light radiation from the sun. Long-wave colors of the light spectrum have a harder time penetrating this atmosphere. The light therefore appears blue, especially at sunset.

Several factors make it possible to explore Mars. The relative distance of the planet to earth is manageable. In addition, Mars has an atmosphere thin enough to operate on the surface. Mercury is too close to the Sun and Venus’ atmospheric pressure alone would destroy all rovers and probes in a short time.

That leaves only Mars, which humanity can explore relatively easily. Several countries are therefore planning manned and unmanned missions to the red planet in the coming decades. The previous images of Mars show that our neighboring planet resembles our earth in some ways.