We’re back to talking about radars! The capital’s road safety system includes a total of 41 traffic control devices, installed in strategic locations, with the objective of reducing the speed practiced on the roads and, consequently, reducing the number of accidents and minimizing their impacts. in the victims.

According to data revealed, in just one month, the new radars in Lisbon “hunt” 38,000 drivers in a month.

After all, there will be more than 2.2 million euros of revenue that the municipality will generate in the first month of operation due to the 38,000 drivers caught speeding between 1 and 30 June.

On average, 1267 excess drivers were "caught" per day. The minimum value of speeding fines is €60 for anyone caught up to 20 km/h over the on-site limit. 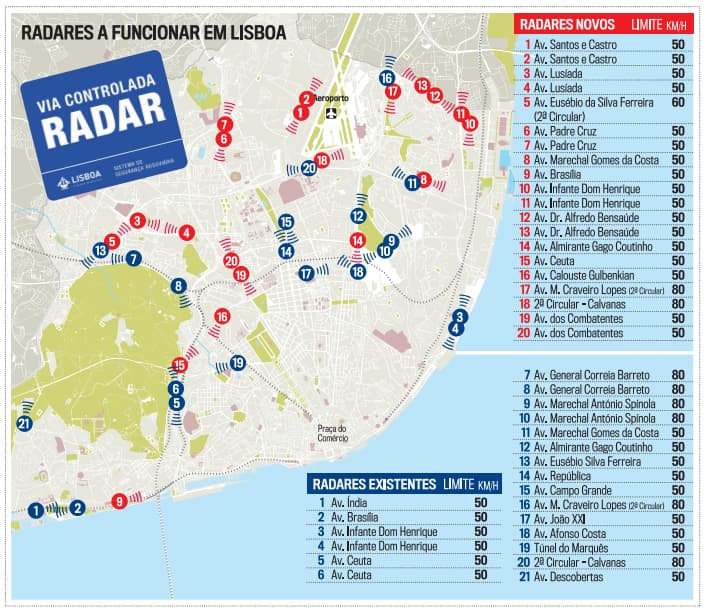 The Lisbon CM said that, “These are not effective numbers relating to offenses considered eligible, since in many cases we may be talking about situations related to, for example, priority vehicles on a police or rescue mission”.

It should be noted that of the "revenue" from fines, the Lisbon Chamber keeps 55%, then 10% goes to the National Road Safety Authority and the remaining 35% to the Tax Authority.

You can also see here where the radars are installed in Lisbon. Depending on the area, there are radars that record those who pass at speeds greater than 50 or 80 km/h. According to information, in the last six months, only those who passed, in excess of speed, through a mobile radar of the PSP or the Municipal Police were fined.

Until June 24, the municipality makes it known that “the highest speed captured on the Lisbon radar system was 240 km/h on Avenida Marechal Craveiro Lopes (Second Circular), next to the Repsol station pumps, towards Airport/Benfica” , where the maximum speed is 80 km/h as it is a 1st level road network, according to the Lisbon Municipal Master Plan.