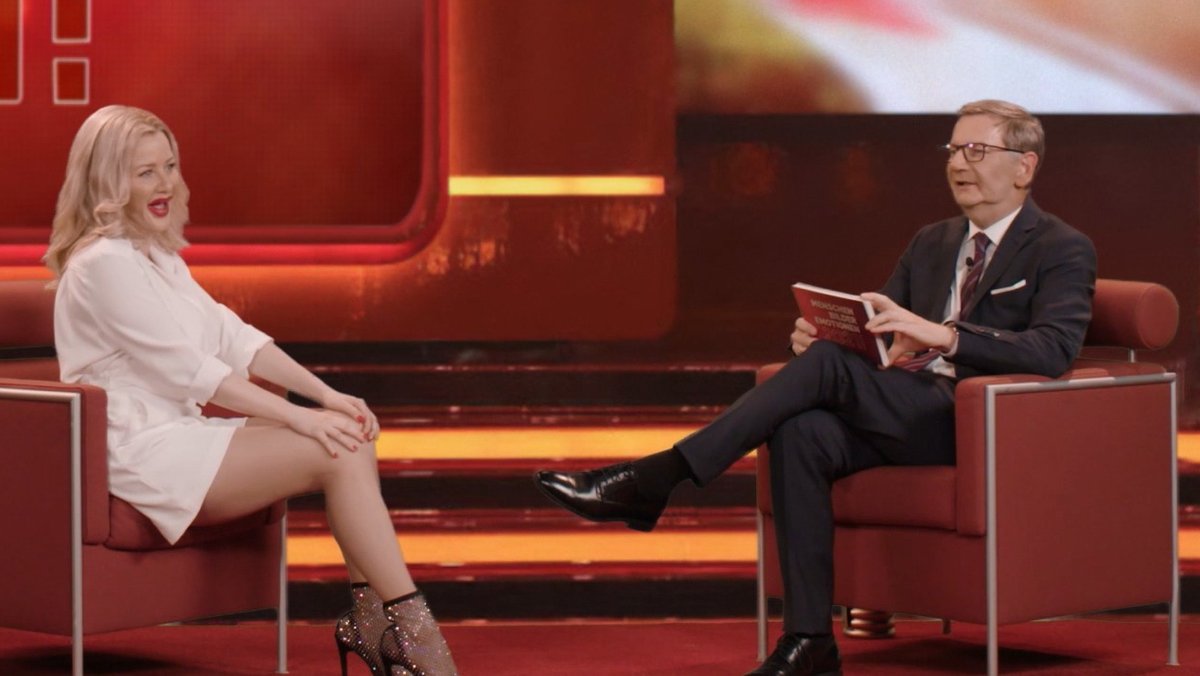 The comedy show “Binge Reloaded” is entering its second season with a real premiere (from January 14th on Amazon Prime). For the first time, the actor couple Jasmin Schwiers (39) and Jan van Weyde (42) can be seen together in front of the camera. While the 42-year-old already impressed with his Bill Kaulitz parody in the first season, Schwiers was breaking completely new ground.

“Before that, I was pretty tired,” she reveals in an interview with the news agency spot on news and goes into raptures about her husband: “I think my guy should be an award-winning!”

You are the newcomer to “Binge Reloaded”, in which roles will the viewers see you?

Jasmin Schwiers: I play Evelyn Burdecki, Lisha Savage, Starlight from “The Boys”, Detective Decker from “Lucifer” and a few other roles. A colorful mix of streaming and television.

Which parody was particularly challenging for you?

Schwiers: Parodying itself was a completely new discipline for me and a great challenge. So far I’ve interpreted my roles as an actress, there is a little more room for maneuver. There is no such leeway with parody, you just try to get as close as possible to the original. Before that I was pretty full, I have to admit.

How did you prepare for the roles?

Schwiers: At first I looked at research material without end. Then I tried to repeat the original recordings and work out linguistic subtleties. This was followed by litany-like repetition in connection with gestures and posture. It was Sisyphus work! And don’t forget the many mask tests in our incredible mask department. What they make possible is absolutely amazing!

What do you personally think of the dating shows like “Bachelorette” or “Love Island”, which get their fat off with “Binge”?

Schwiers: I’m a big fan of dating shows! I love formats like “Bachelor” or “Bachelorette” or “Prince Charming” and “Princess Charming”! But there are also formats in which the general level is simply too primitive for me. Pumped-up guys who care about the fact that the blonde who has been poached beyond recognition “optically” suits them well, while cheating on her in front of the camera, don’t pick me up.

What is currently the worst entertainment show on German TV for you?

Schwiers: I can’t necessarily pin it down to one program. But the “reality” that the television editors of this country cast together for us is in part itself so caricatured that it can hardly be satirically exaggerated. Personally, I get out if there is too much anti-social trash because there is no longer any identification surface.

Even Netflix hits like “Bridgerton” are not spared from “Binge”. What series are you addicted to?

Schwiers: The last series I gave was “House of Money”. I think it’s awesome how the Spaniards manage to keep the tension curve high over so many seasons. The series “The Boys” is definitely in my top three as well. So it’s all the funnier that I was on the set of “Binge” in a Starlight costume … little fan moment!

Schwiers: Concerns? Zero! The others were more likely to have them! One of our directors actually told me in retrospect how relieved he was that Jan and I worked so relaxed together. He probably had a horror idea of ​​a married couple on the set beforehand. But the opposite was true. We gave each other maximum support and had a great time!

Did he recommend you as a new addition for season two?

Schwiers: Through Jani, I had of course noticed that there was a casting. But I had to act like everyone else. He was able to advise me, for example on the question of which figures might be right for me. Without his encouragement, I might not have tried it in the first place.

Did you get any tips from him?

Schwiers: I was definitely able to benefit from Jani’s wealth of experience. Even so, I had to find my own way of approaching my parodies. Jani is incredibly intuitive. He hears a crazy voice and can imitate it immediately. That is almost outrageously talented !! For me it’s more of a mixture of intuition and meticulousness. And many hours of practice …

Jan van Weyde can be seen again as Bill Kaulitz, among others. Which parody do you prefer to see your husband in and why?

Schwiers: I admire its versatility. Joko Winterscheidt, Carsten Maschmeyer, Daniel Hartwig, Steffen Henssler, Ross Antony – he can do them all! I know, as his wife and mother of his children, I may not be objective, but I think my guy should be award-winning !!

Do we see you both now more often in joint projects?

Would you be up for a third “Binge” season again?