Razer sent us to test two of their live kit products, the Seiren V2 X it’s the Kiyo X. If you’re looking for a webcam and a microphone for live streams it’s worth checking out this brief review with reviews and reviews on these devices.

THE Kiyo X is a very practical USB webcam that has as one of its highlights the ability to capture the 60 frames per second (60fps). This feature turns out to be interesting mainly for those who enjoy making game broadcasts, because apart from that there is no other aspect of great prominence. Anyway, I can tell you that for those who need a camera for video calls, this gadget delivers more than necessary.

About the maximum resolution, the camera is Full HD, which we can also consider the minimum for this gadget.

As for the design and its physical characteristics, the camera has a small reclining support that adapts well to the monitor and facilitates framing adjustment. This same base has a standard thread for fitting tripods, the same used in DSLR cameras. These two features have become essential nowadays in webcams and the main competing models also bring this aspect.

The camera is beautiful, but the lines around the lens easily collect dust and also make cleaning difficult. You can see this detail in one of the images in the gallery above, in some of the photos I cleaned the camera to better represent the moment it was just taken out of the box.

About image quality, below you can see a comparison of Razer Kiyo with three other important webcams on the market: Logitech StreamCam, Logitech C920 and PCYes.

This is a difficult product to be found in Brazil and with a hefty price when compared to its competitors. Also the quality of image leaves something to be desired, mainly because of the amount of post-processing.

In addition, it comes with a semi-hinged base with standard microphone thread, which allows it to be used with other supports and even tripods. The microphone isn’t big, it can give the impression that it’s bigger in photos and videos, it’s only 12 centimeters and 285 grams.

It brings some practical details such as the dedicated button to mute the capture, a volume controller (wheel) and an audio output that can be used for microphone feedback or Windows itself.

The microphone is plug and play, but you can choose to install Razer software to access microphone gain and audio output volume settings. 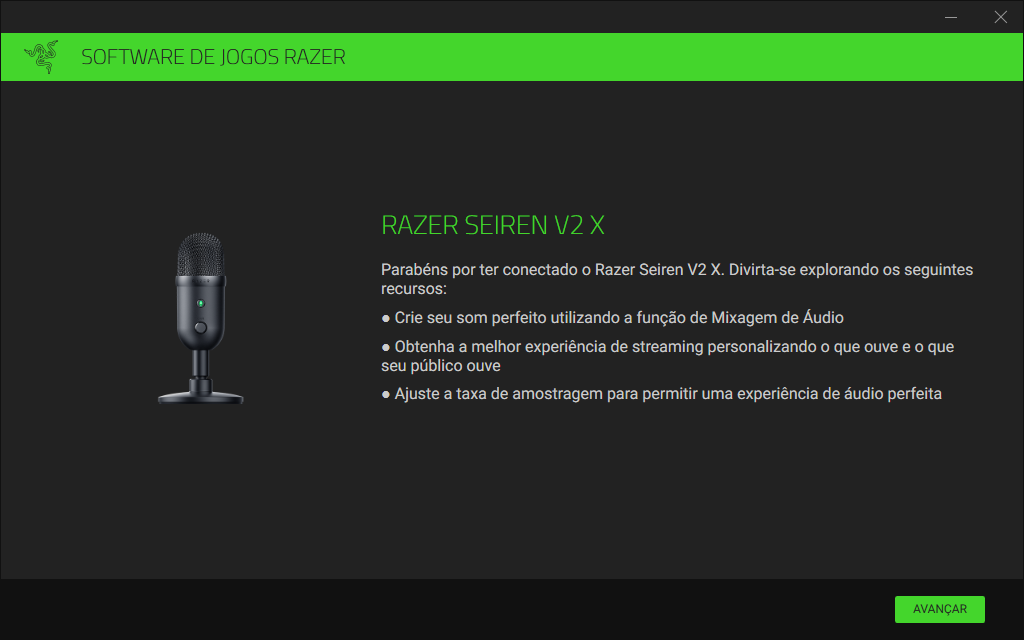 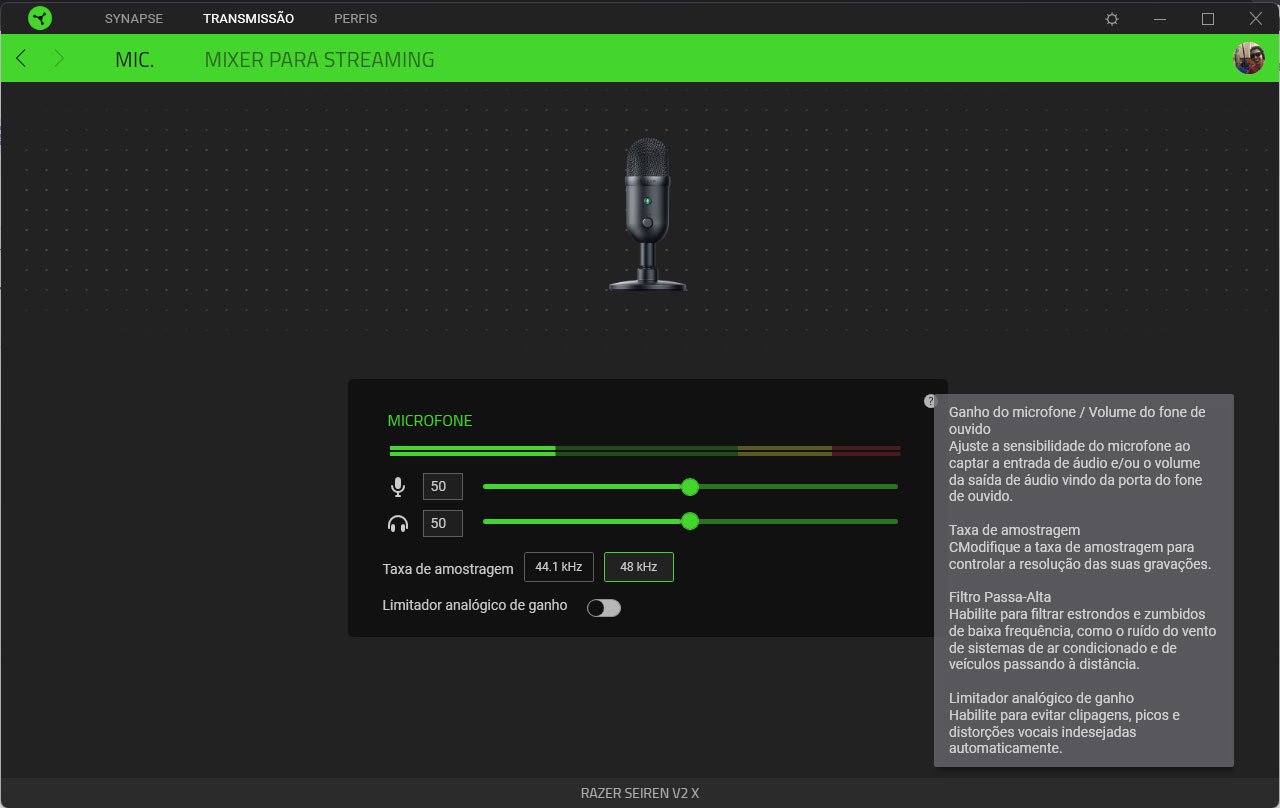 As for the software, the highlight is the “Analog Gain Limiter”, which prevents the microphone from bursting at times and is something that cannot be changed so easily by the system. You can even turn on Windows enhancements in the sound properties, but there’s no guarantee they’ll have the same effect. 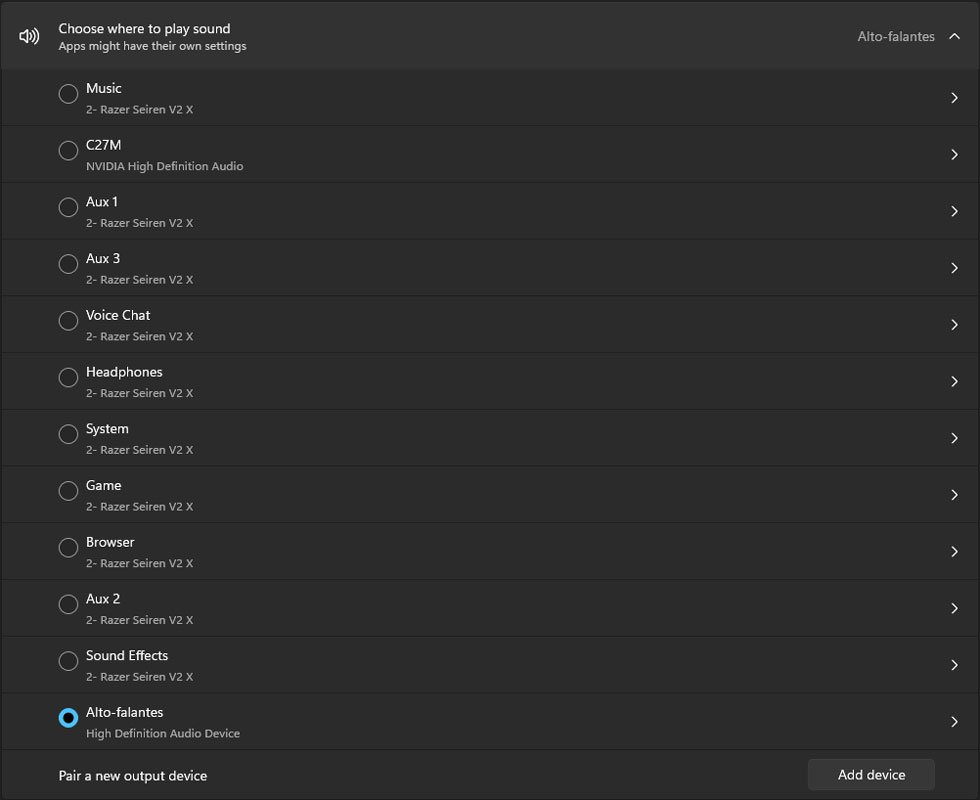 The best way for you to decide if the sound quality suits you is to listen to different microphone captures and compare them to other microphones. In the video below you can check a brief comparison between HyperX Quadcast, Solocast and Seiren V2 X microphones.

The sound of the Razer Seiren V2 X has a full-bodied sound and leaves nothing to be desired compared to its market competitors. For those who broadcast, having control over more outputs can be useful in a few situations, but for those who want something simpler it can end up getting in the way, because they are automatically recognized by the system.

Other than that, it’s not easy to find in the Brazilian market, but it’s worth it if found and for a lower price than the microphones mentioned here.