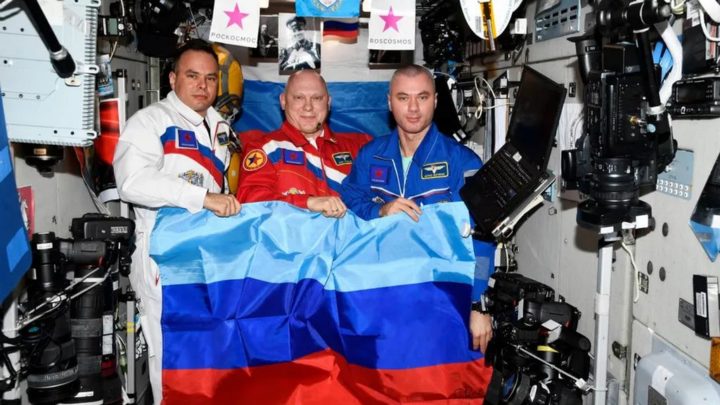 The war on Ukrainian soil is taking longer than expected and the borders of the conflict have long ceased to be the territory that Russia wants to conquer. War, directly or indirectly, is affecting the entire world… and beyond with astronauts declaring support for Russia.

Russian astronauts shared photographs associated with anti-Ukraine propaganda, captured on the International Space Station. This act has already been condemned by NASA.

"We celebrate both on Earth and in space"

The photos were later shared on Telegram by Russian state space corporation Roscosmos on July 4, where astronauts can be seen holding the flags of the Luhansk People's Republic and the Donetsk People's Republic, the two Russian-controlled breakaway regions in eastern Ukraine.

Although the day chosen for sharing is the Independence Day of the United States of America, it is also the day of the Liberation of the People's Republic of Luhansk and the caption, according to Google Translate, reads "We celebrate both on Earth and in space ".

NASA strongly rebukes Russia for using the International Space Station for political purposes to support its war against Ukraine, which is fundamentally inconsistent with the station's primary function among the 15 participating international countries, which is to develop science and technology for peaceful purposes.

This is a rare rebuke by NASA against Russia, which is the space agency's main partner on the International Space Station, which, despite ongoing tension between the United States and Russia over the invasion of Ukraine, NASA and Roscosmos have continued to work together to maintain continuous operations aboard the ISS. This even after statements by the head of the Russian space agency Roscosmos, Dmitry Rogozin, threatening the continuity of cooperation between the two agencies.

The re-establishment of normal relations between partners on the International Space Station and other joint projects is only possible with the complete and unconditional lifting of illegal sanctions.

Still, NASA has already come to say that Russia is still considering extending its partnership on the ISS, and both NASA and Roscosmos will continue to work towards an upcoming crew change in September, when a Russian cosmonaut will travel on the Crew Dragon of the ISS. SpaceX to the ISS, while an American astronaut will fly in a Russian Soyuz capsule.