Several rumors emerged at the end of 2021 giving information about various new mid-range smartphones that Samsung is currently developing. These rumors specifically point to three models, namely the Galaxy M33 5G, A33 5G and A53 5G, which will be the company’s new cost-effective entry models and were found today on a certification site.

On the website the devices Galaxy M33 5G, A33 5G and A53 5G were respectively found with the serial numbers SM-M336BU/DS, SM-A336E/DS and SM-A536E/DS. Not much information is revealed about the devices in this certification, but it serves as an indication that the devices are almost ready for the official launch. 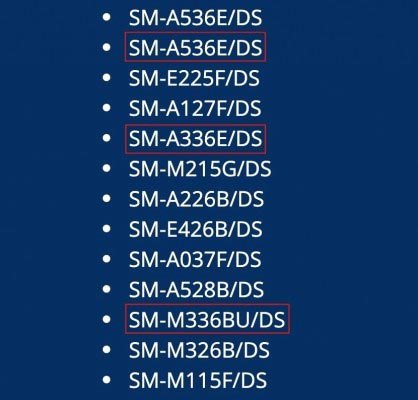 According to some previous rumors about the devices, the most powerful model should be the Galaxy A53 5G, which is an intermediate device with a OLED screen with a t120Hz refresh rate. He must submit a 64MP main camera, with a total of four sensors on the rear, and it also shouldn’t bring a 3.5mm headphone jack.

internally the A53 should come with chipset Samsung Exynos 1200, the same as the Galaxy M33 5G should also bring. The model M33 has even been found using this SoC in the test of Geekbench, according to leaks about this device, it must have a 6000 mAh battery.

THE Galaxy A33 5G must be the most entry-level of the three models, according to some rumors about the device, it must have a 6.4” Super AMOLED screen and with a 1080p+ resolution, 5000 mAh battery, 15W charging and earphone stand.