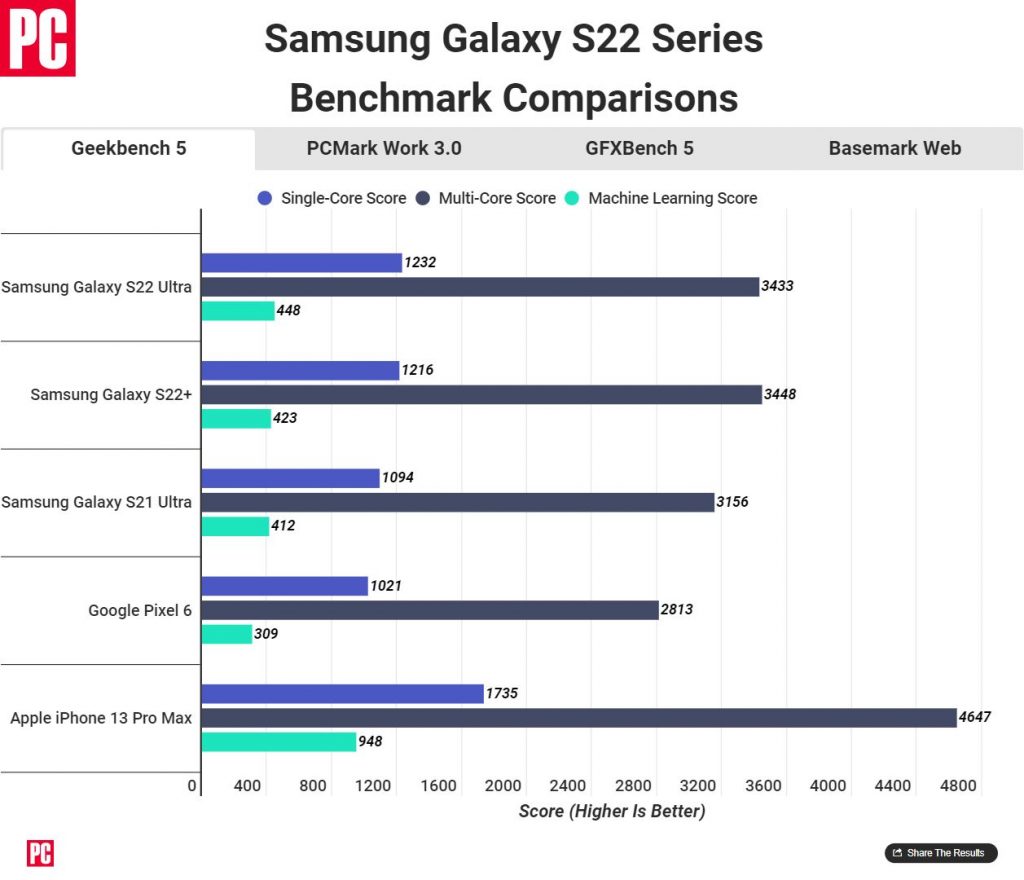 The new smartphones from Samsung have been available for pre-order for a few days now. They will be in stores on February 25th. That is particularly impressive Galaxy S22 Ultra – not only because of its size, but also because of its performance. But it can also be in competition Samsung vs Apple assert? After all, the group from Cupertino, California, made a strong showing in autumn 2021.

There’s no question: the Ultra model of Samsung’s current flagship series outshines all other Android phones. However, these are by no means the only devices that can be found in the smartphone segment. The Samsung vs. Apple battle unearths a new head-to-head race with each annual release. Of course you can simply compare the technical components of the models to choose a winner. However, the benchmarks of the respective devices have more significance.

The industry magazine PCMag took a close look at them. The team compared the Samsung Galaxy S22 Ultra, the S22+, the S21 Ultra, the Google Pixel 6 and the iPhone 13 Pro Max from Apple. The reviewed S22 Ultra lists the Qualcomm Snapdragon 8 Gen 1, not the Exynos 2200 used in Europe. However, the two processors have almost the same performance.

You can quickly see that no other device can keep up with the Pro Max model of the current iPhone series. Not only the smartphones from Samsung are lagging behind, but also the Pixel 6, which is equipped with the Google Tensor chip. At least: Compared to its predecessor, the new processor gives the Galaxy S22-Ultra a 13 percent increase in the Geekbench single-core scores and nine percent in the multi-core scores.

Throttling on the new Ultra model

During his tests, PCMag editor Sascha Segan found that the Samsung phone quickly got warm. From this point, the Geekbench results dropped sharply. He therefore not only evaluated the benchmarks, but also ran a CPU throttling test. After a good 15 minutes, the device was throttled to 75 percent performance. Compared to the S22+ and the S21 Ultra, the new phone definitely throttles more.

The fact that the latter is ahead in the Samsung vs. Apple race does not mean that the new flagship series from South Korea is weak. After all, it easily asserts itself against the Android competition. If you want to see it for yourself, you can pre-order the Samsung Galaxy S22 now. Here is also the tariff:

The links marked “Advertisement” are so-called affiliate links. The linked offers do not come from the publisher. If you click on such an affiliate link and make a purchase via this link, FUNKE Digital GmbH will receive a commission from the relevant online shop. For you as a user, the price does not change, there are no additional costs for you. The income contributes to being able to offer you high-quality, entertaining journalism free of charge.