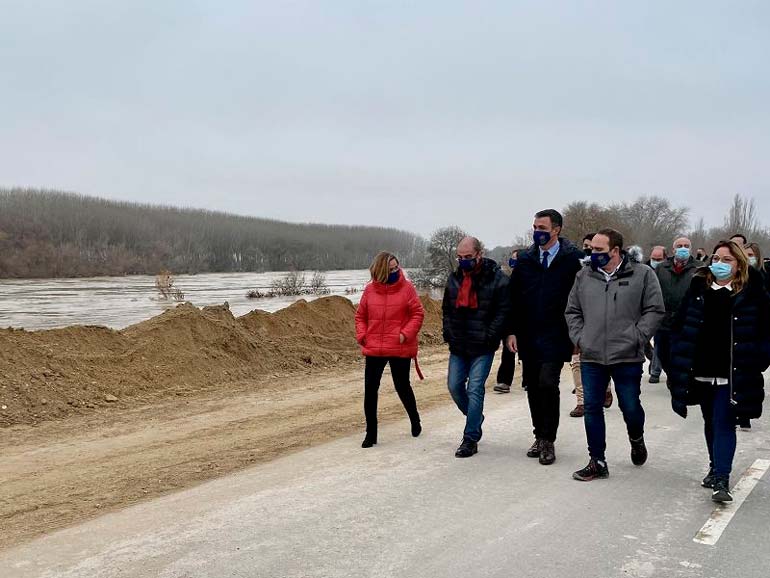 “We are going to put all the resources of the State to respond as soon as possible to the needs of the neighbors.” In this way, the President of the Government, Pedro Sánchez, has guaranteed from Pradilla that the aid to alleviate the losses caused by the flooding of the Ebro will arrive as soon as possible, with the desire that “they recover their day to day in the least possible time ”.

Sánchez has made these statements from Pradilla de Ebro, on the edge of the flood, which this Tuesday was around 6.5 meters high. There he recalled that the Council of Ministers will declare this Friday the catastrophic zone in the most affected towns to “alleviate the consequences” on crops and the homes of neighbors. “We are going to start up all the vehicles of the State to try, as materially as possible, that the neighbors regain their normality,” he said.

Precisely, Sánchez himself already visited this same area in 2015, when another flood destroyed the crops on the banks of the Ebro, and already then promised that he would act on the river to reduce the damage of the floods. Thus, it has recognized the “work of public servants” to “prevent and anticipate” the consequences of floods, also recognizing the efforts of the State Security Forces and Bodies.

In turn, the leader of the national Executive has valued the “example of coordination” that all administrations have carried out to respond to the neighbors. “What the neighbors want is for us to be behind them and put the general interest before any other consideration,” insisted Sánchez, who will complete his visit to the area in the Navarran town of Buñuel and the Rioja municipality of Alfaro.

In this sense, the president of Aragon, Javier Lambán, also recalled the flood of six years ago to claim the cleaning work carried out in the area during this time, warning that “without this radical change in the management of the avenues” Today we would speak of “quite considerable catastrophes.” At the same time, it has shown its desire to “intensify” the work included in the Ebro 2030 Plan.

A message also conveyed by the mayor of Pradilla, Raúl Moncín, who, after spending “a few difficult days”, has seen that “less water than expected” has dropped, so it has not been necessary to evacuate the town. “There have been illnesses in the fields. We hope that they will continue the dynamics of the Hydrographic Confederation and DGA of cleaning and actions in the river ”, he stated.