President Jair Bolsonaro sanctioned last Friday (7) the legal framework for own energy generation, microgeneration and distributed minigeneration. Published in Official Diary of the Union, a Law No. 14,300/22 will allow consumers who produce their own energy to pay the TUSD Wire B tariff (Tariff for the Use of the Distribution System) on the distribution of the energy produced.

The sanction of the current president was awaited by much of the sector. In an exclusive interview with InfoMoney, Guilherme Suteras, coordinator of the Brazilian Photovoltaic Solar Energy Association (Absolar) stated that the framework will bring legal certainty to the sector. Estimates of the association point to the generation of R$ 173 billion with the drop in costs to consumers until 2050. 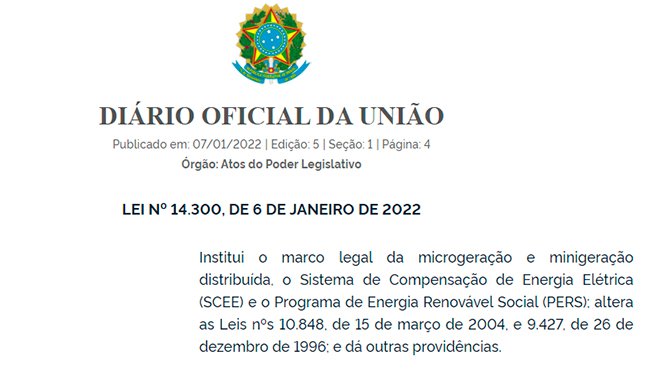 According to the text published by the Union, consumers who produce their own energy will undergo a transition that will allow the payment of the TUSD Wire B tariff on the distribution of that energy. The Tariff for Use of the Distribution System (TUSD Wire B) is the fixed amount charged by Aneel for the use of the system, which includes costs with installations, maintenance, equipment and components of the distribution network.

It is important to point out that those who produce photovoltaic solar energy need to be connected to an energy distributor, which captures the surplus produced, so there will be the payment of the TUSD Fio B. Below you can see the dates for new connection requests to the distribution system:

In addition, as of 2023, for each unit of energy inserted into the electricity grid, there will be a 4.1% discount on the low voltage tariff. The discounts will increase each year, until reaching 24.3% in 2028. Consumers with systems above 500kW, the payment on energy taken to the electricity grid will be the equivalent of 29.3% of the low voltage tariff.

President Jair Bolsonarovetoed two points from Marco Legal: Floating solar plants mounted on hydroelectric reservoirs will not be considered as micro and mini distributed generation, and minigeneration will not be included in infrastructure projects in the Special Incentive Regime for Infrastructure Development (Reidi), which would suspend the incidence of PIS and COFINS on the acquisition of equipment and machinery.

After the publication of the legal framework, the National Energy Policy Console (CNPE) and the National Electric Energy Agency (Aneel) will have up to 18 months to regulate the costs and benefits of microgeneration and distributed mini-generation.