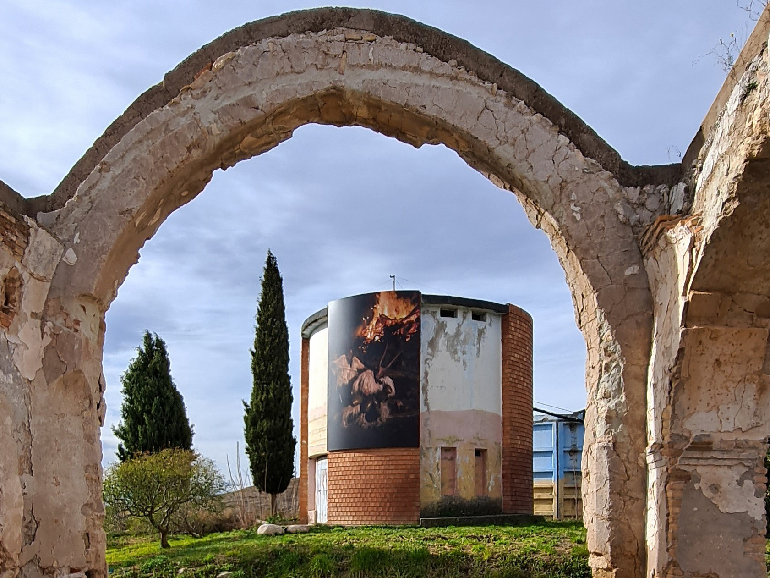 In the “Holy Office” that decorated one of the walls of the Quinta del Sordo, Goya painted a group of women and men on pilgrimage to nowhere in a kind of procession that perhaps had something to do with the Inquisition. In the “Holy Office” that already appears in the Mirador de Valmadrid, Karina Skvirsky reflects a stone mass with legs that looks towards the landscape. Apparently different, but with a common dialogue, there is something that clearly relates the original work and its reinterpretation: color. Or, rather, the absence of him. And that is precisely what characterizes Goya’s Black Paintings, which now come seen through the gaze of fifteen artists to the fifteen municipalities of the Campo de Belchite Region thanks to the initiative “The intervention of the Real: Reinterpretations of Goya’s Black Paintings ».

In order to make art a hallmark of the region and to give visibility to those municipalities and places in them that sometimes go unnoticed, 15 national and international artists have faced the «great challenge of dialoguing with a Goya’s work ”, has assured Vicky Méndiz, an artist who has reinterpreted“ Capricho with five heads in a landscape ”that already appears on one side of the Church of Moyuela. Quite a challenge considering that this is the only work of the Black Paintings that is not shown in the Prado and that “it is an enigma even for historians and art scholars,” acknowledged the photographer, who has been inspired by the “Look and be looked at.”

A contemporary and up-to-date version of “Una manola: Leocadia Zorrilla” is already in the laundry room of Codo, just like “Duel with clubs” in La Puebla de Albortón, “Las Parcas” in Azuara, “Saturno devouring his son” in Letux , “Two old men” in Fuendetodos, “El aquelarre” in Samper del Salz or “The pilgrimage of San Isidro” in Belchite. In total 15 works by 15 artists in 15 municipalities that reflect the impact and legacy that the Aragonese painter had.

«The authentically real emerges in the Black Paintings and that is what has been captured in each of the photographs that can be seen in these municipalities of the region. Photography was chosen as an artistic expression because it is said that Goya was the forerunner of that photographic gaze and in the Black Paintings he reveals that birth of modern art, ”said the curator of the exhibition Alejandro J. Ratia.

«The first thing I thought when I found out about the project is that how was I going to face a work by Goya. Any artist assumes that as an unattainable challenge, but then it is a matter of gazing and sitting down to dialogue with the work. What “Las Parcas” tells me is that death is always implicit in birth, “acknowledged Rafael Navarro, another of the initiative’s photographers.

The reinterpretations of what were the works that embellished the Quinta del Sordo will remain in these places until September 2024. A key date and that is when the bicentennial of the Aragonese painter’s abandonment of the house and his departure to Bordeaux is celebrated. With a tour of about three hours, the visitor will be able to enter one of Goya’s darkest and darkest times, one in which the limits of reason are reflected and reflected in the most real and crude art.

In parallel to the exhibition project, it is planned to be revitalized through talks and visits by the artists to the towns, with the aim of providing more incentives and enrichment for both visitors and the inhabitants of the region. The first meetings within this project begin this Thursday, December 9 at 6:00 p.m. at the Joaquín Roncal Center of the CAI Foundation in Zaragoza, with the artist Santiago Ydáñez, who will talk with the art critic Alejandro J. Ratia about his career and of his work for this project ‘La riña a garrotazos’, installed in La Puebla de Albortón, a reinterpretation of Goya’s painting ‘Duelo a garrotazos’.

Next week it will be the turn of the photographer Isabel Muñoz, who will visit her installation «Sombras. Japan 2018 Series “installed in Letux – a reinterpretation of the black painting” Saturn devouring his son “- and will participate in various activities in the region. The next day, on Wednesday 15 at 6:00 p.m., he will talk with photographer Rafael Navarro, also at the Joaquín Roncal Center of the CAI Foundation, about his participation in the project.