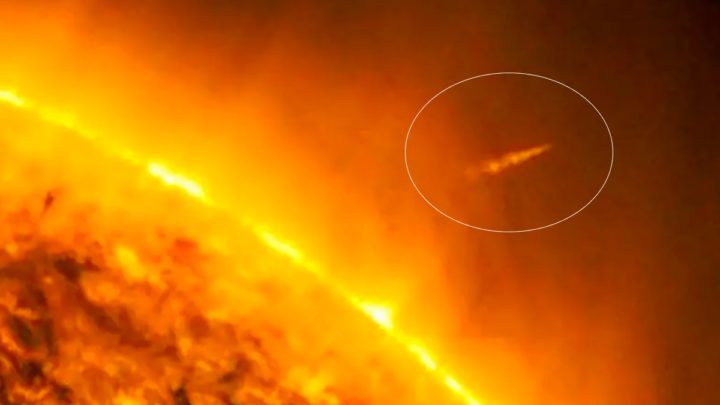 A comet hit the Sun just as the Solar and Heliospheric Observatory of NASA observed the movements of our star. As the images show, the comet could not resist the intense gravitational pull of the Sun. On the other side of the star we can see a huge coronal mass ejection.

Contents
Outer space may forgive, but the Sun cannot.How was this comet composed?

This star was doomed. Experts say that it would already be a fragment of a substantially larger body.

Outer space may forgive, but the Sun cannot.

A comet was captured by NASA's Solar and Heliospheric Observatory last Sunday while observing the solar movements.

The doomed star would be a "Kreutz sungrazer" or Kreutz Grazing Comets. Basically they are fragments of a giant comet that broke apart many centuries ago.

According to astronomer Tony Phillips:

There is a swarm of these fragments orbiting the Sun, and every day at least one gets too close and disintegrates. Most, measuring less than a few feet in width, are too small to be seen, but occasionally a large one like today's attracts attention.

The images show that the comet was vaporized in the Sun's powerful and intense gravitational pull. The heat is such that when approaching, this fragment disappears in a few seconds.

THE COMET DID NOT SURVIVE: As with most sun-diving comets, this one did not come out the other side of the Sun after its nearest approach to the Sun (perihelion). 🙁 pic.twitter.com/ok5fHbfdDv

How was this comet composed?

Comets, roughly speaking, are small bodies in the solar system that begin to heat up and release gas as they pass close to the Sun. Comets can range in size from a few hundred meters to tens of kilometers.

According to NASA, comets are cosmic snowballs of frozen gases, rocks and dust that orbit our star. When frozen, they are the size of a small town. When a comet's orbit brings it closer to the Sun, it heats up and hurls dust and gases into a gigantic, glowing head, larger than most planets.

The dust and gases form a tail that travels away from the Sun for millions of kilometers. There are probably billions of comets orbiting our Sun in the Kuiper Belt and even further away from the Oort Cloud.