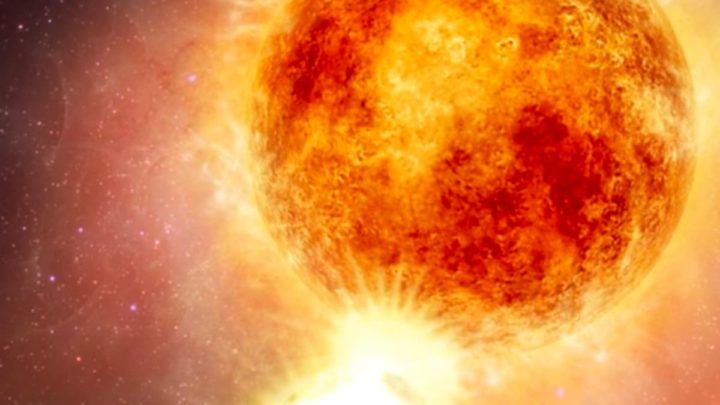 Betelgeuse is a very large, luminous and cool star classified as a red supergiant. It is one of the brightest stars we can see here on Earth. In 2019, this superstar literally blew off his top. Astronomers, using data from NASA’s Hubble and other observatories, concluded that the bright red star lost a substantial part of its visible surface and produced a gigantic Surface Mass Ejection (SME).

Contents
Betelgeuse after all is slowly recoveringBetelgeuse study before, during and after SMEDust cloud from ejection blocked Betelgeuse’s lightA gelatin inside

The phenomenon was something that had never been seen in the normal behavior of a star. If it were our Sun, the Earth would suffer… a lot!

For example, our sun routinely blows out parts of its tenuous outer atmosphere, the corona, in an event known as a Coronal Mass Ejection (CME). However, the Betelgeuse exploded 400 billion times more mass than a typical CME!

After this explosion, the star dimmed, lost brightness and became less prominent. Would it be a "last breath"?

Betelgeuse after all is slowly recovering

Since 2019, when the monstrous coronal mass ejection took place, the great star is still slowly recovering from this catastrophic upheaval. Andrea Dupree of the Center for Astrophysics, Harvard & Smithsonian in Cambridge, Massachusetts, said the following:

Betelgeuse continues to do some very unusual things right now; the inside is jumping.

These new observations give clues to how red supergiant stars lose mass towards the end of their lives as their nuclear fusion furnaces run out, before exploding as supernovae. The amount of mass loss significantly affects your fate. However, Betelgeuse's surprisingly petulant behavior is not proof that the star is about to explode anytime soon.

Therefore, the mass loss event is not necessarily the sign of an imminent explosion.

Betelgeuse study before, during and after SME

Astronomers tracking this event are now piecing together all the pieces of the star's insolent behavior before, after and during the eruption into a coherent story of a titanic upheaval never before seen in an aging star.

Of course, as researcher Dupree points out, the Hubble data were instrumental in helping to solve the mystery.

The titanic explosion that occurred in 2019 was possibly caused by a convective plume, more than a million and a half kilometers in diameter, bubbling up from within the star. This phenomenon produced shocks and pulsations that exploded from a piece of the photosphere.

This left the star with a large, cold surface under the cloud of dust that was produced by the cooling part of the star. photosphere. Betelgeuse is now struggling to recover from this injury.

This star weighs several times more than our Moon, the fractured piece of photosphere accelerated into space and cooled to form a cloud of dust. This is what blocked the star's light as seen from Earth.

The dimming, which started in late 2019 and lasted a few months, was easily noticeable by "amateur" observers, who watched the star's brightness change. If you look for a bright star in the sky, you can easily find Betelgeuse on the right shoulder of the constellation orion.

This star has an irregular "heartbeat". However, the supergiant's 400-day pulsation rate no longer exists, but it may just be a temporary situation. For nearly 200 years, astronomers have measured this rhythm as evident in Betelgeuse's variations in brightness and surface movements. His disturbance attests to the ferocity of the explosion. 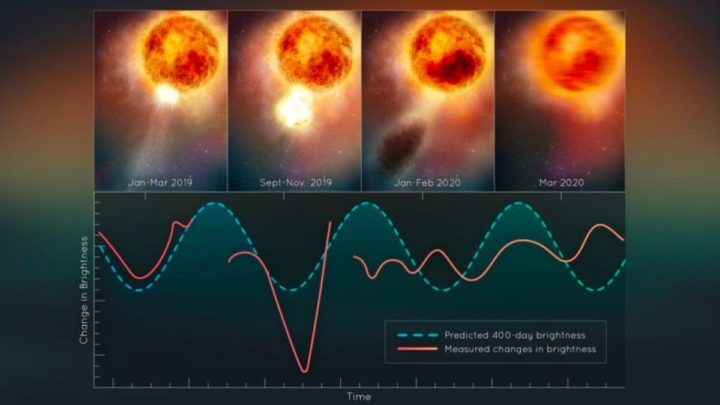 The top 4 illustrations show the Betelgeuse ejecta mass from January 2019 to March 2020. At the bottom is a graph plotting the change in brightness of the star over time

By what astronomers think, the star's interior convection cells, which drive the regular pulsation, could be sliding around like an unbalanced washing machine. The TRES and Hubble spectra imply that the outer layers may be back to normal, but the surface is still bouncing around like a slab of gelatin as the photosphere rebuilds.

Betelgeuse is now so large that if you replaced the Sun at the center of our solar system, its outer surface would extend beyond Jupiter's orbit. Dupree used Hubble to resolve hot spots on the surface of Betelgeuse in 1996. 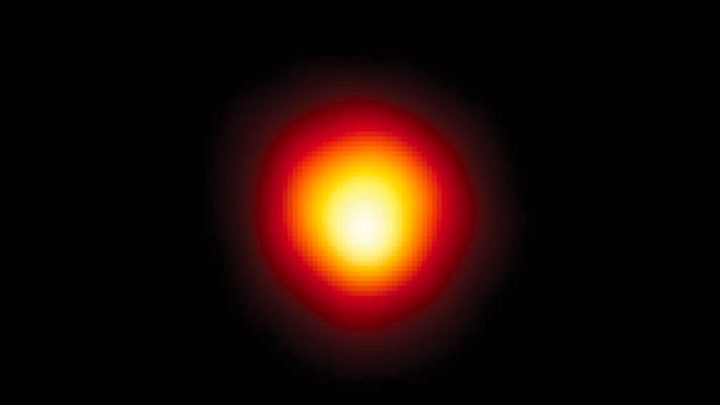 Image of the star Betelgeuse seen via ultraviolet light by the Hubble Space Telescope, and subsequently enhanced by NASA. The bright white spot is likely one of the poles of this star. Image via Andrea Dupree/ Ronald Gilliland/ NASA/ ESA/ Britannica.com.

This was the first direct image of a star other than the Sun. NASA's James Webb Space Telescope may be able to detect ejecta in infrared light as it moves away from the star.

In summary: Astronomers have concluded that the bright red supergiant star Betelgeuse literally blew off its top in 2019. Betelgeuse lost a substantial part of its visible surface, causing a cloud of dust to form and darkening the star as seen from Earth. Betelgeuse is still recovering from that explosion.