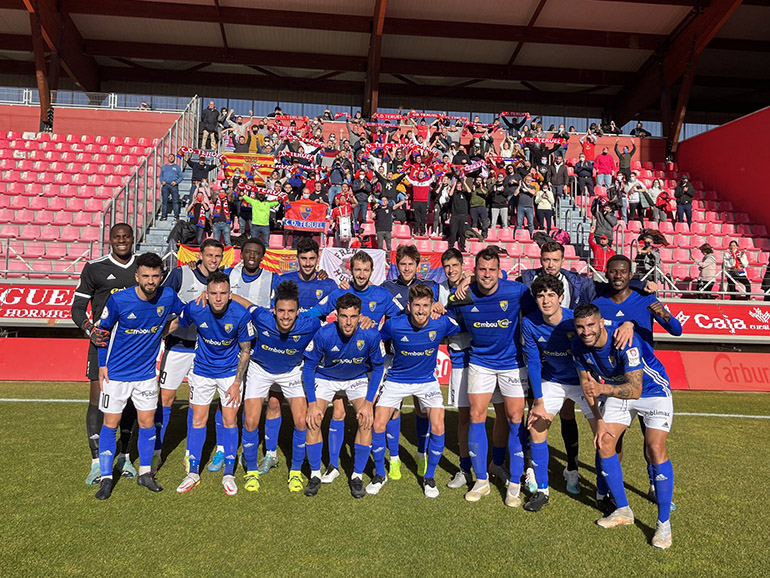 Bad results for the Aragonese geography on matchday 15 of the Second RFEF. Only Teruel, who scored a point at Numancia’s home, was satisfied with their result in the category. For the rest, Brea and Ebro tied, while Tarazona fell in El Prat and Huesca B and Ejea were thrashed by Lleida and Espanyol B, respectively.

Starting with the happy face, it is necessary to mention the Club Deportivo Teruel. During their visit to the mythical Los Pajaritos stadium, the people of Teruel managed to start a draw with a very good game displayed. In fact, in the second half, they were the ones who enjoyed the clearest chances, and the 0-1 was even annulled due to a doubtful offside. In addition, they had the support of some 300 displaced fans.

Brea and Ebro also starred in an interesting duel with a 1-1 draw in the municipality of Piedrabuena de Brea de Aragón. The game varied a lot, with a first part where the Ebro had many occasions and a second in which Brea knew how to become stronger with the push of its fans. Jorge Adán put the harlequins ahead with merit before the break and Cano put the tables with a great goal from the squad.

Tarazona El Prat de Llobregat fell by the minimum after winning 1-0 this Sunday at Municipal Sagnier. It was at the end of the game when the locals took the blow to win the match pushed by a streak of two consecutive games winning. For its part, Tarazona, who had already lost in their last match, is in fifteenth position.

Huesca B had worse luck, and already occupies the penultimate position of the qualifying table. A home win (1-3) that also seriously complicates him emotionally. It was not the day for Huesca B, which was overtaken by a Lleida who appeared at Santiago de Grañén as a direct rival. The Catalans prevailed with a better football that was reflected on the scoreboard, and Sandoval’s goal only served to modify the score of an uphill match.

The Ejea Sports Society was also defeated by Espanyol B, perhaps with a result that was too bulky for what was seen on the pitch. The Perico subsidiary took the lead in the 13th minute. In the second half, the Ejeans came out completely overturned to attack, generating numerous scoring chances. However, they did not manage to see the goal more than once and the Catalans finished off the match with quick counters.