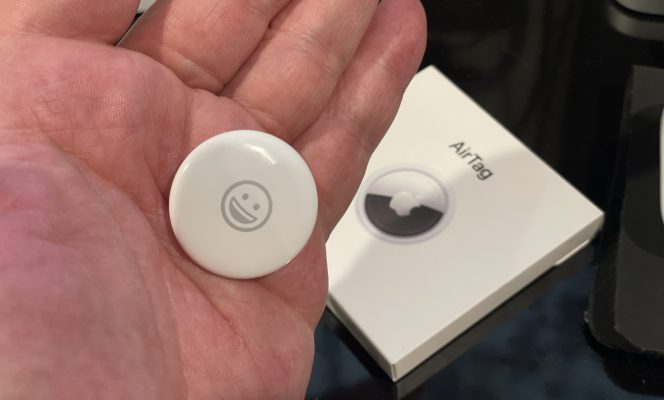 I’ve taken the last few weeks to relax and make sure my hot 2022 shots are as scalding hot as possible, or at least as prescient as possible. This week, we’re talking about what I’m sure may be one of the biggest Apple scandals of the decade so far: the little AirTag.

You can receive this in your inbox every Saturday morning from newsletter page, and follow my tweets @lucasmtny.

AirTags are a very useful product from Apple that works exactly as advertised.

Lately, there’s been a lot of controversy about how Apple released them and how, while they’re great devices for tracking your keys, they can also be easily abused to stalk someone. This is not a purely theoretical issue either, it is already happening.

It’s not a particularly unique scenario where technology can be used for good and bad purposes – just think of the decades-long conversation about cryptography – which said I have a feeling this is a scenario where Apple will lose and be more embarrassing than than any misstep in recent memory.

Apple has organized much of the wearable marketing in recent years about how its devices work in high-end use cases. The latest generations of the Apple Watch have focused on health tracking features that can help identify rare conditions or help users in life-threatening situations. TV commercials documented the individual stories of users who found the Apple Watch to be a life-saving tool. With AirTags, there is potential for the same good, but there are also many more downsides. Next year, no doubt, we’ll see examples of AirTags being used in nefarious ways that, taken together, serve as the antithesis of one of these Apple Watch commercials. It may end up being a product defined by its gross shortcomings.

Apple has made its own post-release efforts to restrict how AirTags that don’t belong to a particular user can be detected, but these notifications proved to be problematic and often waited too long to alert users. Add the fact that Apple seemed to treat Android integration as an afterthought, not a necessary partnership to ship a device like this, and Apple’s incompetence seems a little more serious.

I very much doubt that Apple will be able to design a way out of this problem. Regardless of what they send on iOS to reverse issues, Android’s fractured ecosystem means the safeguards won’t reach a large number of people they can be targeted.

For a nascent product category with such liability potential, it’s hard to see how Apple justifies continuing to sell AirTags. It’s Apple’s unique mistake, as the company delivered exactly what it initially promised, but didn’t consider the full scope of the direct consequences of that initial promise.

Here are some stories from this week that I think you should take a closer look:

Elizabeth Holmes convicted on 4 of 11 counts
Finally, the trial of Theranos founder Elizabeth Holmes reached a resolution. We now await sentencing, as well as further guidance on whether Holmes will be tried again on several of the charges on which the jury has failed to reach a verdict. “Holmes was found guilty of conspiring to defraud investors, as well as defrauding investors in the DeVos family, hedge fund manager Brian Grossman and former wealth and trust attorney Dan Mosely. She was not found guilty of charges related to defrauding patients,” reported my colleague Amanda.

Google Infringed Sonos Technology and Commercial Court Rules
Google’s smart speakers have infringed key patents held by Sonos, a US regulator ruled this week, and the company will no longer be able to import the infringing Chinese-made products. Google has already started implementing design changes that it hopes to interrupt its ability to sell its smart speaker devices. Sonos has seen its early lead in the smart speaker war dissipate as the tech giants shed their weight, but the smaller hardware company isn’t shrinking.

A smaller, quieter CES
The Omicron wave prevented the Ploonge team from going to Las Vegas to check out the latest gadgets at the Consumer Electronics Show, but we were at the show in spirit and watching countless live streams. While it was certainly a quieter year, there were still plenty of wild gadgets this year. Here are some of the best we’ve seen.

Some of my favorite reads from our Ploonge+ subscription service this week:

How startups can prevent technology debt from piling up
“…Favoring a short-term plan for a faster time-to-market option isn’t always a bad thing, as long as the company has a backup plan to deliver well-engineered code that simplifies future iterations and innovation. But for startups, rework is difficult as deadlines and scarcity of resources prevent developers from producing clean, flawless code. Startups prioritize short-term plans and focus more on adding functionality to reach milestones, sign up top customers or raise funds. This shuffling of the script and disrespect for the long-term vision trigger technological debts…”

3 Things Founders Need to Know About M&A
“…M&A is particularly beneficial for startups struggling to scale operationally because they basically buy cash flow, revenue and traffic from other companies, which means startups capture a larger share of their markets. They are also a good way for startups to find, consolidate and experience their value proposition. The problem, however, is that most founders don’t know how to get started with mergers and acquisitions and resign themselves to the shadows of big players. But mergers are affordable and win-win for companies of all sizes…”

Thanks for reading and again you can get this in your inbox every Saturday morning from newsletter page, and follow my tweets @lucasmtny.

Have a great week!