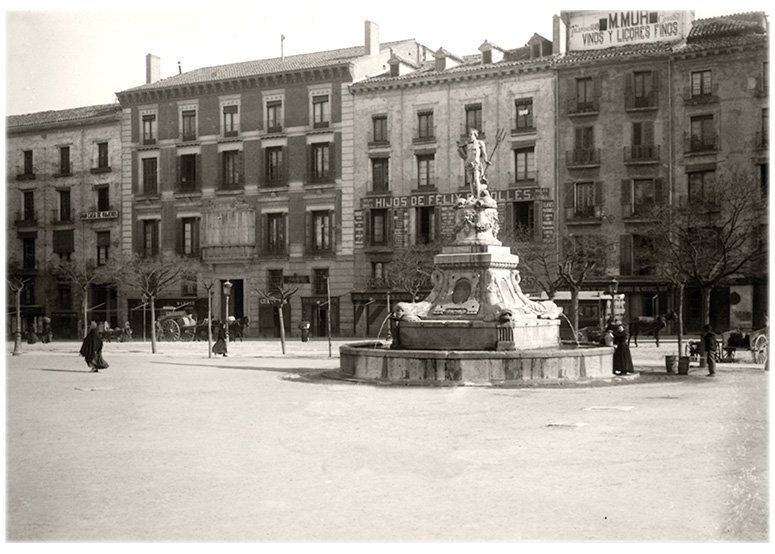 Let no one doubt that the advertisements that appear in this photograph represented at the time a phenomenon as modern as the most impressive of the Ogilvy or Bassat campaigns. Although some time ago some Britons had already labeled their liquors, in 19th century Spain it was unusual for such an everyday product as pomace to have its own name.

Jumping from one century to the next, spirits and wines from the most diverse wineries and stills, some of them belonging to stale surnames, were becoming trademarks. And that without the countryman ever fully understanding what a sign with the name of a product made hundreds of kilometers away was doing on the wall of his casino. Although the roof of the tram read “ORÚS chocolates”, the chocolates were neither produced nor sold on the vehicle. For us it is obvious. Not for our great-great-grandparents.

In Zaragoza in the last decade of the 19th century and from the portrayed Plaza de la Constitución, along Calle de la Independencia you reached the Santa Engracia barracks and the Pignatelli theater. If you walk a little further, you will reach the Glorieta with the same name, as well as the Captaincy building. At that time, around the oval, the most elaborate little hotels that the city knew and will know were being erected, and furthermore, after passing the door of Santa Engracia, the brand-new faculties of Medicine and Sciences had just been inaugurated. Without forgetting that something further on, crossed the bridge over the Huerva, were located the Jesuit schools and the Sagrado Corazón.

Therefore, many were the people of Zaragoza who, on a daily basis, for enjoyment or obligation, came and went along the wide central platform of Independencia. Soldiers, “nurses”, ladies with umbrellas, gentlemen with bowler hats, urban guards, florists, maids and grooms in smocks used to walk through it, while cars, carriages and trams circulated along the sides.

Miguel Mur, a middle-class man dedicated to the importation of wines and spirits, was the owner of farm No. 37 in the Coso, on whose ground floor he located his office. His was a modest building, four stories high with a recessed attic, but Don Miguel soon realized that, thanks to the linearity of the avenue, the whitewashed wall of his attic was visible from the other end of the promenade.

Thus, already in 1894, who, starting from the Plaza de Aragón, went to the Plaza de la Constitución, today in Spain, during those six or seven minutes, depending on their stride and their haste, could read in the background the sign that read: “M. Mur fine wines and spirits ”, with the three digits of his telephone number. It is clear that Mur was a future businessman.

It was just entered the XX when the proud municipalities of Zaragoza, despite the still precarious supply network, decided to do without the source of the Princess, vulgar de Neptuno, that so well served the girls and water carriers. For Mosén Jardiel, then at the head of the Royal Economic Society of Friends of the Country, the source bothered him a lot, considering it a pagan occurrence of liberal politicians. More pious the great men of this century than those of the previous one, promoted the erection of a monumental complex that, without resorting to lascivious dolphins, exalted patriotism and the Christian faith.

In 1904 the monument to the Martyrs of Religion and the Fatherland was inaugurated. Note that in the image the matron sitting on the pedestal does not appear, an effigy that represents the heroic Zaragoza, since its foundry was almost ten years away from that of the upper group, the gossip that for monetary matters between the competent commission and the sculptor, Agustín Querol. It remains to say that at the moment the set was not provided with a jet or any trickle.

As this happened, in Independencia the flow of walkers increased. In the exultant months of the 1908 Hispano-French Exposition, it is to be supposed that those who left the venue through the door of the Paseo de La Mina, on their return walking or by car, would contemplate on the horizon the advertisement for Miguel Mur’s liquors. The same as those who have just heard mass in the restored temple of Santa Engracia or returned to make faces in the gardens that surrounded the monument dedicated to Lanuza, which, like the previous one, had been inaugurated in 1904 after Pignatelli migrated to his own park. That would also be the path taken by the modern bourgeoisie that was settling on the banks of what was already Paseo de Sagasta, on the other side of the Huerva.

More or less by then Mur had tidied up the façade of his building by adding, among other things, a balustrade over the eaves that partially concealed the legend of the wines. Hence, the wall was restored to its whiteness for a very brief period. In exchange, a four-meter-high sign was installed on the roof that advertised the Pedro Domecq wineries in Jerez de la Frontera, but even so the business asked for more space, after a few years and without taking down the large sign above, the aforementioned wall was again labeled announcing the French liquor “Benedictine”. Not that only. Shortly thereafter, the railing was hidden by another poster, originally a poster for a champagne.

Undoubtedly, Miguel Mur’s was the best positioned advertisement in Zaragoza during the first half of the 20th century, only surpassed later by the gigantic CAMPZAR lamp raised on the top of the Elíseos building, about which we promise to speak some day in this same section. , as long as no more Greek letters attack us and Europe does not completely misplace its ideology.

In 1910 the allegory of Zaragoza had finally been able to be seated at the foot of the monument. This had nothing to do with the replacement of the advertisement for champagne by that of “Anís del Mono”, which was later overthrown by that of “Fino La Ina”. For his part, the powerful Domecq, not satisfied with occupying the top, also took possession of the balcony on the main floor.

It is not strange that the old mansion at No. 37 del Coso, having forever renounced discretion in pursuit of sales, dragged its neighbors to the marketing of its attics. Bit the apple, the signs on the roofs were happening in a prodigy of balance and metallurgy and without the City Council regulating too much.

In the mid-fifties, the products to be advertised began to be more than the roofs. The “Flex” mattresses anchored their sign between the tiles of the neighboring building, on the corner with “el Tubo”, using an impeccable slogan: “the best, the best”. Although no comma appears on the poster, it is still in colloquial use in the memory foam era. The Swiss “Longines” on the contrary opted for the categorical. He affirmed without shame or hesitation that his signature was “the best watch.” Ready.

In the sixties television entered homes, as long as homes could afford it. It was true that the best receivers were named after a Dutch gentleman, but there were also peninsular ones, with equally cathodic but infinitely more catholic rays. However, none of this, even the transmission of images and sounds through the airwaves, could be compared to the prodigious fact that pouring the contents of an envelope into boiling water produced an acceptable noodle soup.

We are talking about advertisements, so it should be remembered that the death of that group of buildings was highly announced. Who could avoid it, or who knew how, did not. It did not serve the large houses to commute the sentence alleging the couple of centuries in which they had efficiently served as a curtain for the Plaza de España. After dismantling one by one the businesses that occupied their premises; “Alfa”, “el Mañico”, “Las Vegas” and “Hergar”, in 1988 the first excavator surpassed the portal of the 35 and without giving a single blow it entered directly to kill. In a couple of days he undid moldings and partitions, having tens of thousands of pedestrians and motorists as witnesses. Once the site was flush, the Caterpillar siege continued almost to Calle 4 de Agosto, leaving their rear exposed. Seeing them naked and crying, a charitable advertising agency covered them with a kind of gigantic canvas. The subscriber does not remember what invention was advertised in it.

They were entering the nineties when the “Rey Furniture” poster held by the fourth floor of the old Coso 37 was dismantled. For a brief period the windows that had been blinded for years again contemplated the promenade, sighing, as told by the convicts of Venice Before die.

On the neighboring rooftop, Flex’s ad will be the last to fall, and with it his latest invention; “Multielastic”.