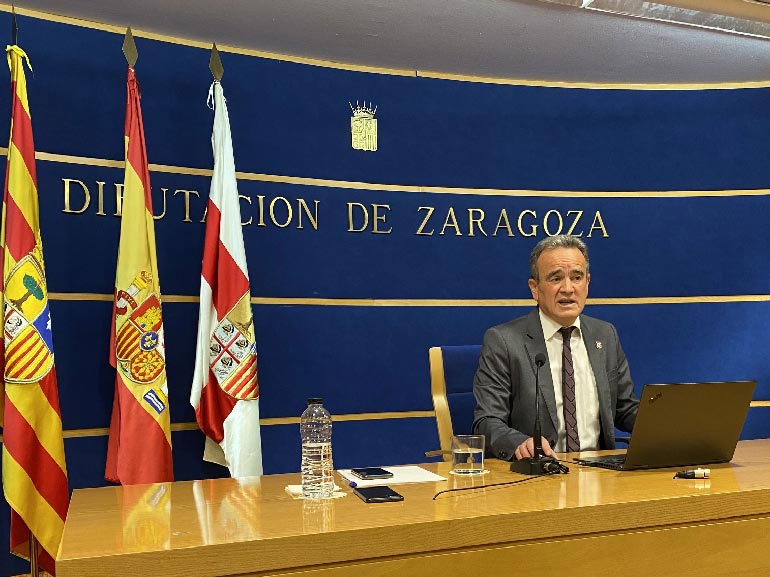 The Provincial Council of Zaragoza (DPZ) has presented this Tuesday a “municipal and transformative” budget that reaches 169,374,402 euros and increases the amount allocated to last year’s accounts by 1%, that is, 1,752,206 euros. plus. This has been detailed by the president of the institution, Juan Antonio Sánchez Quero, who has ensured that the budget project “places municipalities and people at the center of management to confront the Covid crisis with guarantees and satisfy the needs of city councils ”. In addition, this amount could be expanded with another 60 million of the remnants that “will go entirely to the consistories.”

One of the “pillars” of the accounts of the provincial institution will continue to be, for another year, the Unified Subsidy Plan (PLUS), which will once again be endowed with 50 million euros, almost 30% of the initial funds. “It will be distributed among all the municipalities of the province in an objective and transparent way in order to always enhance municipal autonomy,” Sánchez Quero stressed. The municipalities are the ones who will decide how to invest this aid, “thus giving them much more autonomy.” In addition, the aid plan for rural neighborhoods in the province will continue to distribute one million euros and the support plan for municipalities with special difficulties due to the implementation of infrastructures of general interest, which will once again receive the amount of 1.3 million .

The DPZ budget, which is approved this week, will also make an effort to avoid financial exclusion of its municipalities. An item of one million euros is included to support the existence of ATMs, and ultimately, of banking entities in those towns that do not currently have these resources. Of course, the way in which this game will be executed is still unknown.

Sánchez Quero has reported that he has held meetings with financial entities in recent days, and they do not know if a call for aid will be published to which town councils, banks and even the Government of Aragon may adhere, or a call through which the consistories sign direct agreements with the finance companies. According to the president of the DPZ, around 52% of the municipalities in Zaragoza do not currently have a bank.

Among the novelties, the accounts also include an item of 500,000 euros to launch a line of aid for the opening of rural multi-services and another of 400,000 euros to support young entrepreneurs. Likewise, the female self-employment program for rural women entrepreneurs over 35 years of age will continue to be promoted, increasing its amount from 150,000 euros to 400,000 euros. On the other hand, the DPZ reinforces the tourist sector, and specifically, the spas of the province, affected by the crisis derived from the pandemic, through a social thermalism plan that doubles its economic amount from 130,000 euros to the 300,000 euros. In this case, as Sánchez Quero explained, “the user’s stay is subsidized”, instead of granting direct aid to companies.

On the environmental level, the Ecoprovincia project monopolizes all the focuses. The budget for 2022 includes items worth almost six million euros to complete the start-up of this public service that will allow waste from the entire province to be taken to the Zaragoza capital landfill and thus comply with the obligation that all municipalities recycle at least half of your garbage.

Specifically, 968,000 euros to complete the construction of the last of the six intermediate transfer plants in which waste will be received before being transferred to the Complex for the Treatment of Urban Waste in Zaragoza (Ctruz); 2.3 million for the operation of the plants and the transport of garbage, and 2.6 million to pay the fees for the use of the Ctruz -although that money will be passed on to the municipalities-. The Ecoprovincia project has already drawn up the technical specifications and could be presented before the end of the year, with the aim of making it operational during the months of June and July 2022, Sánchez Quero has advanced.

In this environmental context, a new water analytics service may also be launched so that municipalities can delegate to the DPZ the control of the quality of their water supply, worth 200,000 euros, expandable according to demand with remnant charges.

The new budget allocates 1.6 million euros to the purchase of virtual desktops for all municipalities that have requested the implementation of this computer technology that allows the user to work connected to a remote server without their programs and data being present physically on the computer you are using. This system will offer greater security and the possibility of teleworking.

In addition, the accounts also collect an item of 500,000 euros for the extension of the 5G telecommunications network.

While with regard to the services of the provincial institution, 4.3 million euros have been allocated to the conditioning of the roads in the province; 1.4 million to contract an extraordinary plan to improve pavements (up to 40 kilometers were improved with the previous program), and one million to fix roads through the company Tragsa. As for the Fire Brigade, it is planned to build two new parks in Cariñena and Tauste, and to improve the existing facilities worth 1.3 million euros, although in total the DPZ allocates more than 12.5 million to SPEI, the 7.3% of the budget.

Regarding tax management and attention, an item of four million euros is foreseen for the provision of the management service and the collection of municipal taxes and fees, since 95% of the town councils of the province are entrusted to the DPZ that task.

In culture and heritage, the institution allocates more than 14 million euros to the different items, which represents around 8.4% of the total budget. Among them are grants to cultural associations, grassroots sports clubs and entities that work for the recovery and dissemination of heritage, totaling 950,000 euros.

Other lines of work

In addition to the main issues on which the provincial institution will work, the DPZ also includes in its budget project aid to student residences, academic institutions and various associations; 100,000 euros to finance the “Rural Erasmus” program that has been promoted for four years between the DPZ and the University of Zaragoza, and the four million euros that the county council will transfer to the Zaragoza City Council within the latest collaboration agreement signed between both institutions until 2024 for the improvement of the equipment and infrastructures of the rural neighborhoods of the city, and for the coordination in the provision of services such as firefighters or waste management.