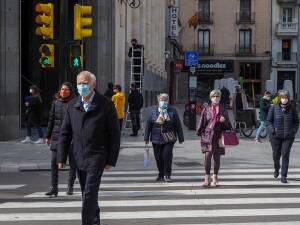 Aragon currently registers an incidence of 313 cases per 100,000 inhabitants within seven days, a figure higher than that registered a week ago (266), although this rate has been decreasing since last December 5, when 338 cases per 100,000 were registered. inhabitants to seven days. However, from Health they warn that it will be necessary to analyze the data of the next few days to determine if this downward trend is maintained, since it may be conditioned by the holiday bridge in the Community.

By age, the child population, not vaccinated, continues to register the highest incidence rate, although this has also maintained a downward trend since last December 5. Thus, the age groups with the highest incidence at the moment are those between 5 and 9 years old, with 688 cases per 100,000 inhabitants in the last week, and those between 10 and 14 years old, with 586. The lowest incidence of Covid occurs in the age group over 75 years of age, with a rate of 148 cases per 100,000 inhabitants within seven days.

In absolute numbers, the Community has accumulated a total of 175,981 confirmed cases of Covid-19 since the beginning of the pandemic, of which 161,619 have already received epidemiological discharge. Regarding mortality and after the weekly review, in Aragon, 3,939 deaths have been registered since the beginning of the pandemic. As for other indicators, the basic reproduction index stands at 0.98, a figure lower than 1 and which reflects the currently decreasing trend in the number of infections.

Global hospitalization has also increased in Aragon in the last seven days, although the increase in ICU hospitalizations remains contained. There are currently 267 Covid patients admitted to the Aragonese centers (233 last week). Of the total, 34 are in the Intensive Care Units (28 last week), which represents 16% of the available ICU beds, and 233 in conventional hospitalization.

The number of contacts under follow-up from Primary Care has decreased slightly to 6,400 people (6,699 the previous week). During the peak of the sixth wave (July 22), the one before this, 18,423 people were followed.

Thanks to the effects of the majority vaccination among the population, the situation, as of today, is substantially different from the same date of the previous year. As of December 9, 2020, with alert level 3 in the community and perimeter confinement of the community, provinces and capitals, 445 hospitalized people and 73 were registered in ICUs in Aragon.

As of today, there are six people hospitalized. The Community is already in the seventh epidemic wave, and in this period two people have died.

The entry The incidence of Covid-19 in Aragón reaches 313 cases in the last week was published first in Aragón Digital.