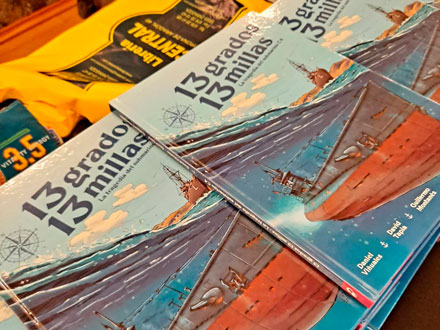 It happened more than 70 years ago and is still remembered as the greatest tragedy of the Spanish Navy in peacetime: the sinking of the C4 submarine in Mallorca during military maneuvers, which left 44 missing. Now this tragedy is transferred to the cartoons of “13 degrees 13 miles”, a comic by GP editions that tells the history of the ship until its fatal outcome. The comic was presented this Thursday at the Caja Rural Aragón headquarters with its creators.

Through 88 pages, “13 degrees 13 miles” tells the history of the C4 until its accident, which occurred in the waters of Mallorca on June 27, 1946, when for unknown reasons it emerged to the surface, being run over by the destroyer Lepanto and then sunk and disappeared into the depths. This 2021 marks the 75th anniversary of the tragedy that, as a letter written by a sailor who witnessed the event assures us, “split” the submarine in two. Due to the difficulties in the area, the accident remains were never recovered.

David Tapia and Guillermo Montañés, two cartoonists interested in the warlike aesthetics of the 1940s, have worked hand in hand on this graphic adaptation. “I didn’t know much about submarines and this project has served to learn a lot about this world that is very wide ”, Said Tapia, who has been in charge of the illustration, a process by hand with pencil and ink.

The C4 had a peculiar trajectory since its inception, it participated in the Spanish Civil War on the Republican side, it was the first submarine courier and it was involved in an attack on another ship by mistake, mistaking it for a model of the enemy side.

The story of “13 degrees 13 miles” is structured by following the historical events that marked the trajectory of the crashed submarine until the denouement. Daniel Viñuales, from GP Ediciones, has commented that, except for some dialogue and everyday scenes, the rest of the acts drawn ran in reality. Viñuales learned about the history of C4 through family members and in this comic he has been in charge of the script.

The role of Guillermo Montañes in this comic has been that of a colorist, this if a more digital work that as explained by the artist himself in the presentation consisted of making flat colors, those that set the tone that each vignette is going to take, to later apply the lights, shadows and the atmosphere of each scene.

The three involved in “13 degrees 13 miles” will be signing copies next week at the Comic Fair in Zaragoza and next February they will present their comic in Cartagena.