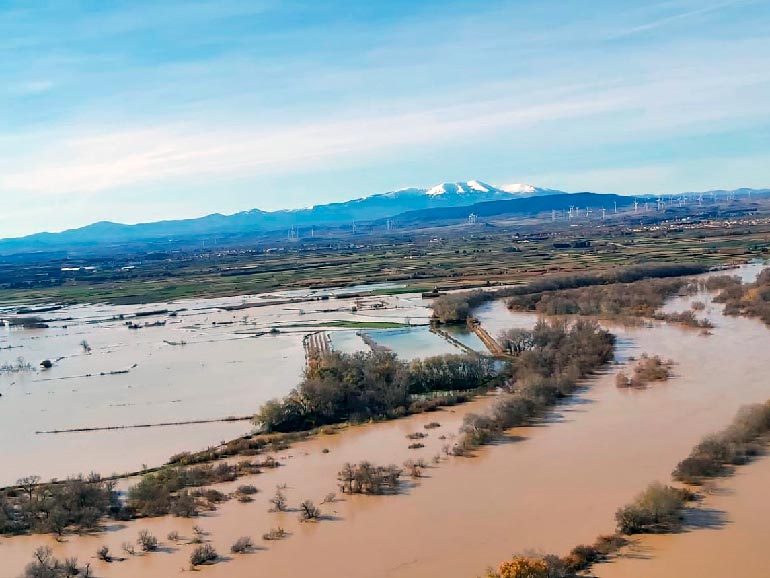 The peak of the Ebro flood has already passed Novillas and continues its journey along the riverbank towards Pradilla. During the night, the flood has reached its maximum level, even forcing to break one of the protection motes to alleviate the flow, which at 5:00 p.m. reached 8.48 meters in height, surpassing the record of the extraordinary flood of 2015.

For this reason, the Civil Guard proceeded late on Sunday to eviction of 55 residents on Pablo Herraz de Novillas street. It was also necessary to evacuate about 600 sheep, although there are still another 400 and as many lambs. Work has been done to reinforce a speck or wall near the beef farm, but the cattle are still inside at this time.

The Government of Aragon already warned that the night was going to be “long”, and all parties were “in the worst situation”, enabling several pavilions to face a flood that “this flood is being slower” than in previous years.

Likewise, the firefighters of the Zaragoza Provincial Council are deployed in the municipalities of the Ribera Alta attending to various incidents caused by the Ebro flood and in prevention checkpoints to respond to any emergency that occurs. In Boquiñeni they are reducing water in the area of ​​the water treatment plant and in other parts of the town. In Novillas there is a preventive checkpoint and the group of drones is flying to check the status of a dairy farm and a sheep farm isolated by water. There are also two preventive checkpoints in Pradilla de Ebro and Remolinos.

In addition, the group of drones is expected to travel to Alcalá de Ebro to monitor the situation of the calf farm that has been helping since Saturday and also go to Torres de Berrellén to check the situation of the defense motes. Firefighters from different parks of the Provincial Fire Extinguishing Service participate in this operation, as well as volunteer firefighters from the Borja group.