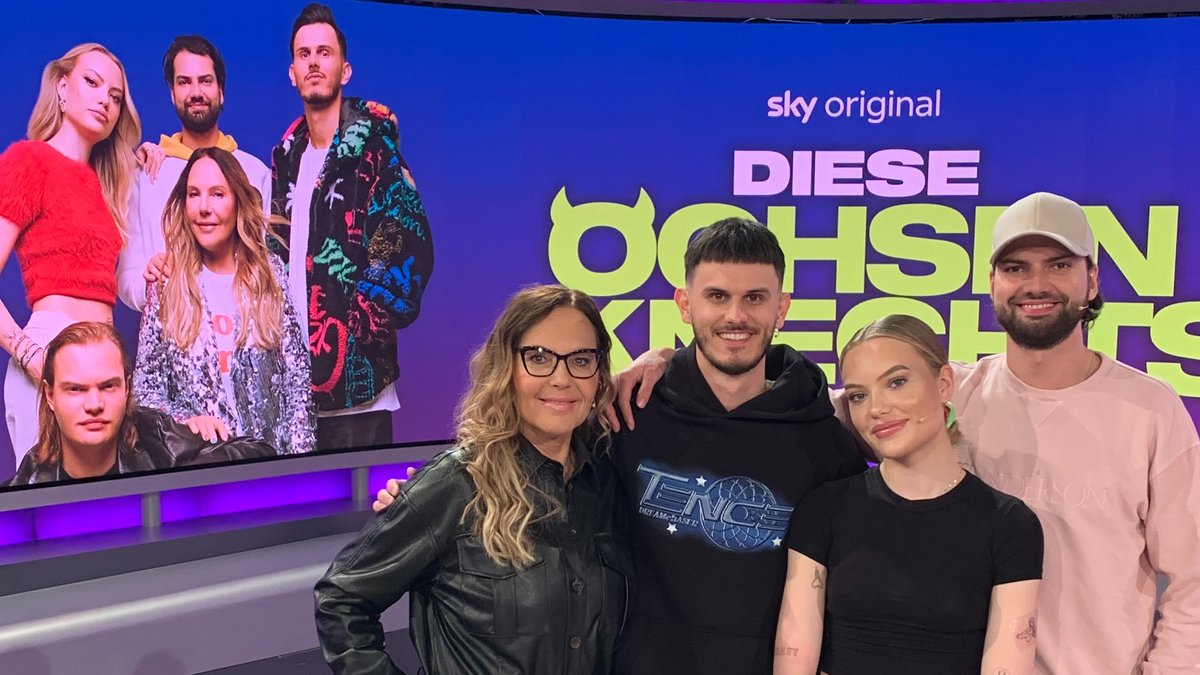 In the new personality soap “Die Ochsenknechts” it becomes authentic. The protagonists made no secret of this at the Sky press conference on Wednesday morning. Natascha Ochsenknecht (57), her sons Jimi Blue (30) and Wilson Gonzalez (31), who joined from London, as well as her sister Cheyenne (22) and her fiancé, the Austrian farmer Nino, have revealed one or the other detail.

The trailer shown includes the big city girl Cheyenne, who moves to the idyllic farm in Dobl/Styria for love. In the clip she says that Nino was actually “not her type” – and vice versa. But it is known that things turned out differently, so Cheyenne reveals her favorite mishap from the series: the “engagement in a red silk dress and white Crocs”.

In the press conference everyone agreed how nice it is on the Chianina farm and how much Nino belongs to the family. Natascha calls him her fourth child, he calls her his second mother. “It was love at first sight – with the whole family.” Wilson Gonzalez sums it up to the delight of others: “We are a family, we stick together and everything else is bullshit.”

There were agreed plots, say the three people responsible for the series, Sky program manager Elke Walthelm, Vice President Entertainment Channels Christian Asanger and format developer Bernd Schumacher (including docu-soap “Daniela Katzenberger”) – but then life just happened. On the one hand, Corona ensured that plans were thrown overboard. The separation of Jimi Blue and Yeliz Koc (28), who was still pregnant at the time, also caused a twist, which brought him a veritable shitstorm. “I comment on how I felt in the situation,” he says. He admits that it worries him a little that past dramas could come back into the limelight as a result of the broadcast.

Naked scenes don’t seem to bother him, because he will be seen cooking naked in the series. “It’s not my fetish or anything. I don’t regularly undress in front of my family,” he explains, laughing at the clipping. In that case it was completely natural because he was in the pool before. And the matter of the “tax investigation” will also be quite exciting, he predicts.

Natascha Ochsenknecht is similarly self-confident when she visits the Beauty Doc, where she was filmed as part of the 60 days of shooting, which spanned a period of six months. And what “Techno-Bärbel”, Natascha’s 81-year-old mother, will contribute, the viewers can also look forward to. Natascha: “I just told her to be nice to me in front of the camera. That didn’t quite work.”

The Ochsenknechts are “no different in front of the camera than behind it”, as those responsible Walthelm, Asanger and Schumacher unanimously attested to the family: They cultivated a “loving relationship” in which “a great family bond” can be felt. It is “not staged peasant theater” and “not a cast-together bunch, but a grown structure”.

Why is Uwe Ochsenknecht missing?

However, actor Uwe Ochsenknecht is missing from the series. Wilson, Jimi and Cheyenne’s father was married to Natascha from 1993 to 2012; the separation took place in 2009. Why is he not there? “Uwe lives on Mallorca, has his own life and his other projects,” explains Natascha. In contrast, she and her children have always been together. That’s why the show is called “These” and not “The Ochsenknechts”. Speaking of missing: Cheyenne and Nino’s daughter Mavie will appear in the series, but her face will not. But there is still a taboo: “The bedroom – this door remains closed,” says Natascha.

The six episodes of “Dies Ochsenknechts” can be seen from February 21 at 8:15 p.m. on Sky One and Sky Ticket as well as on demand. “More if it’s successful,” Asanger doesn’t rule out a second season.