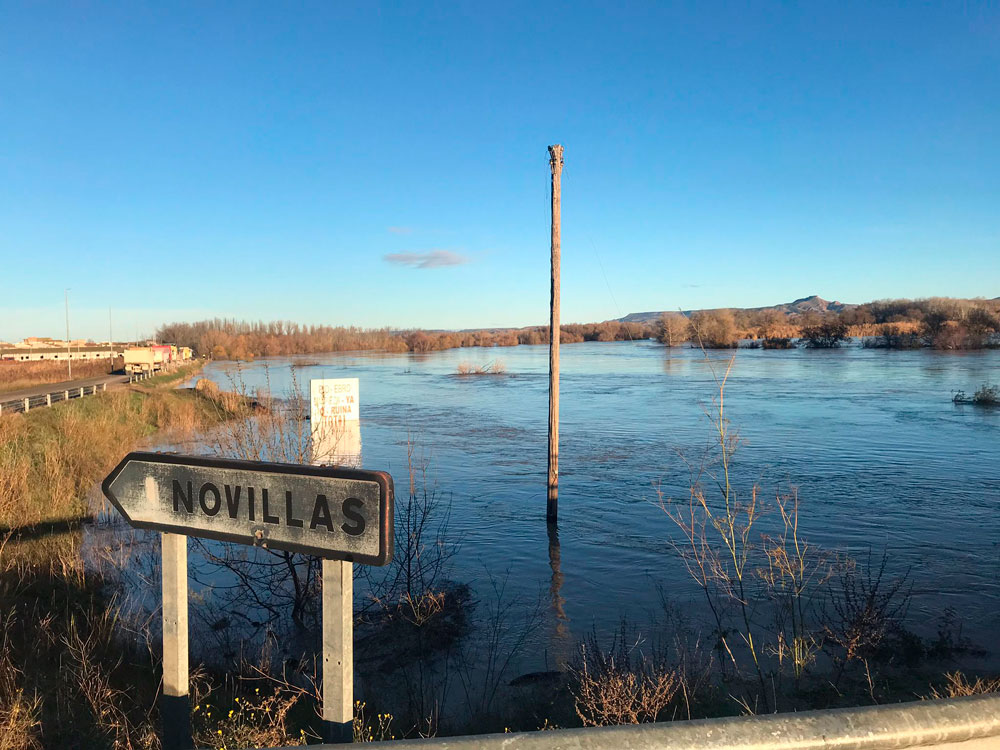 Up to 55 people residing in Novillas have had to be evicted as a precaution before the arrival of the peak of the Ebro flood. Specifically, 23 homes have been evacuated on Pablo Herraz street in this town, which awaits the arrival of the peak from the flood at around midnight from Sunday to Monday, and where the river has already exceeded the height of the 2015 flood, reaching 8.48 meters during the afternoon.

In the same way, the CHE has proceeded to break a speck in the town of Novillas to promote a drop in flow. It has also been necessary to evacuate about 600 sheep, although there are still another 400 and as many lambs. Work has been done to reinforce a speck or wall near the beef farm but the cattle are still inside at this time.

This was decided at the last Cecop meeting, where the President of Aragon, Javier Lambán, the Government delegate, Rosa Serrano, and mayors of the affected municipalities participated. As highlighted by the leader of the regional Executive, all parties have put themselves “in the worst situation”, enabling several pavilions to face a flood that “this flood is being slower” than in previous years. In this sense, the CHE expects the point to reach Pradilla during the morning of Monday, Alagón in the afternoon and evening and Zaragoza city late on Tuesday.

The Government of Aragon, which has about one hundred people deployed in the Ribera Alta, foresees the arrival of the peak of the flood to Novillas tonight, with a flow greater than the flood of 2015. In the morning, the peak of the flood has passed through Tudela, with a height of 6.11 meters, 26 centimeters more than the one reached in 2015. The weather forecasts for the next few days are favorable, after 10 days in which in the north of Navarra they have reached 1,000 liters per square meter, unknown record in the last 60 years.

With the first news of the flow data, the UME operation moved to the Campo de Borja region to reinforce the Novillas butte, and as of today there is already a point in its territory that is beginning to overflow. The City Council has indicated that six hours before the peak of the flood is reached, the Ebro Hydrographic Confederation (CHE) has put all its devices into operation, sending trucks to reinforce the area. “What matters now is to protect the speck of the town,” said the mayor of the town, Abel Vera. These works will last throughout the afternoon of Sunday. It should be noted that Novillas is the first town in Zaragoza that in previous floods usually suffers the effects of the Ebro

Since this Saturday, Pradilla have begun to lift their speck, and as a preventive measure, the elderly and people with reduced mobility were evacuated from their residence and have already been transferred to that of Tauste. At noon, the mayor of Pradilla, Raúl Moncín, has indicated that the work on the mota is scheduled to finish.

Although it is too early to know the effects of the flood, the member of the Executive Commission of UAGA (Union of Farmers and Ranchers of Aragón) Javier Fatás, who is visiting the affected areas, has indicated that the damages could be similar to those of the 2015 flood, but that will depend on the endurance of the specks. In Boquiñeni, Fatás has indicated, 300 hectares of crops could be affected, and in Novillas about 1,000.